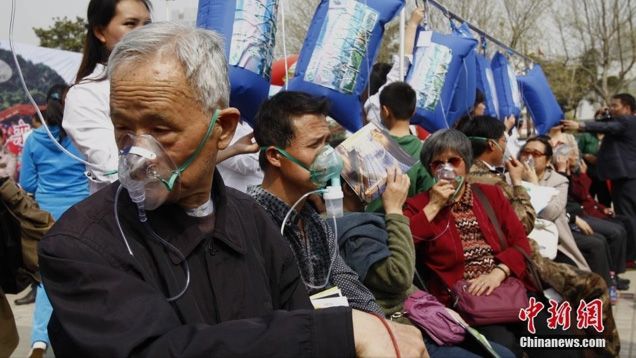 China's cities are notorious for their pollution, with their air quality often ranking as more hazardous than anywhere else in the world. So, naturally, officials have orchestrated a stunt to import clean air.

Not content with the smoggy status quo, city officials from Zhengzhou opted to import some fresh mountain air in an effort to soothe local lungs.

Last month, inner city residents lined up to get their hands on one of twenty bags filled with air from the Laojunshan Mountain National Park.

People.cn reported the event as very popular amongst passers-by, with many wringing air from the bags until they were shriveled and empty.

The event was allegedly a publicity stunt to promote environmentalism, as well as tourism for China's mountain regions.

The city of Zhengzhou is listed as 'unhealthy' on the Air Quality Index, meaning prolonged physical exertion is actually advised against because it could make you quite ill.

Worryingly, Zhengzhou is just the tip of the iceberg, with many Chinese cities ranking as 'very unhealthy' and even 'hazardous'.