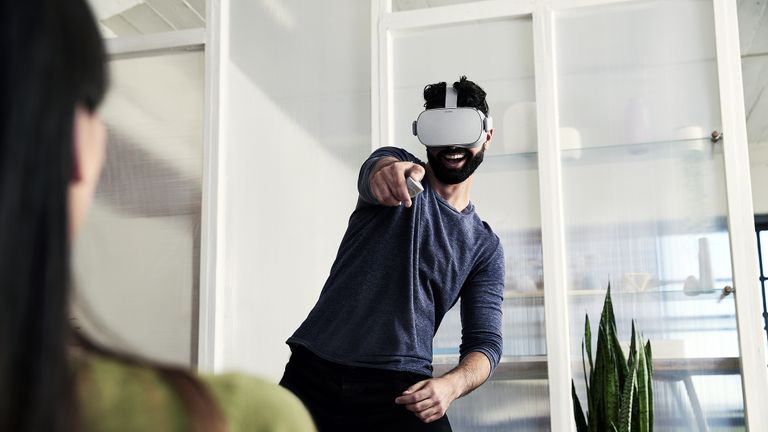 Announced today at parent company Facebook's F8 event, Oculus Go is a self-contained, £200/$200 VR headset with built-in surround sound speakers. At that price, it will probably be the most successful VR headset to date, beating Sony's PSVR.

Available to pre-order at the Oculus website in 23 countries, it offers over 1,000 games, apps and 'experiences' (costing from free to around £10) and requires no PC, console or phone to be functional. That compares pretty favourably to the full-size Oculus Rift and HTC Vive, which cost well over £1000 when you factor in the price of a decent gaming PC, a PSVR (around £235 plus the cost of your PS4) and even the Oculus-branded Samsung Gear VR headset, which is £135 plus the cost of your Galaxy phone.

With a resolution of 1280x1440 pixels per eye in a new, fast-switching LCD display, Oculus claims this has better optics than the full size Oculus Rift, but arguably the killer feature is the audio, not the visuals.

Built-in stereo speakers give an very good surround effect in shooters and when interacting with friends in Oculus Rooms – a sort of virtual chill-out zone where you can hang with the avatars of your best buds, play basic table games and even watch movies together. A mic is also built in.

Taking cues from the sportswear and 'intimate apparel' industries, the headset is well padded, washable and comfortable as VR headsets go – a sort of sports bra for your face, if you will.

It's easy to put on and works well with glasses (a spacer is included should you find it's pressing your specs into your face).

VR has captured consumers' imaginations, but it's failed to tap into their wallets. Cost and having to be wired to another device (or the need to offer up your precious phone to serve as the screen, in the case of Gear VR and the other mobile headsets) must be primary reasons for that, and the Oculus Go sidesteps both.

The entire Gear VR catalogue is available at launch, so there's no shortage of things to try, and titles can be optimised for the new device, although this does not appear to give a massive graphical or performance boost – the refresh rate is slightly faster than on Gear VR, apparently.

As well as the updated Rooms, Oculus has unveiled Oculus Venues, which will launch on May 30 (in the States at least) and offer live-streamed VR experiences includingm "Major League Baseball games, stadium shows from top-selling artists like Vance Joy in partnership with AEG Presents, movie screenings from Lionsgate, and a range of experiences in partnership with NextVR like ICC soccer, intimate gigs with emerging musicians from School Night at the Bardot, and standup events like Gotham Comedy Club."

Arguably more usefully, Oculus Gallery finally gives you something to do with all those panorama photos and 360 videos you've shot over the years. You can sit in front of huge images and look them up and down, side to side. Media can be taken from Facebook, Instagram, Dropbox, your phone "and more".