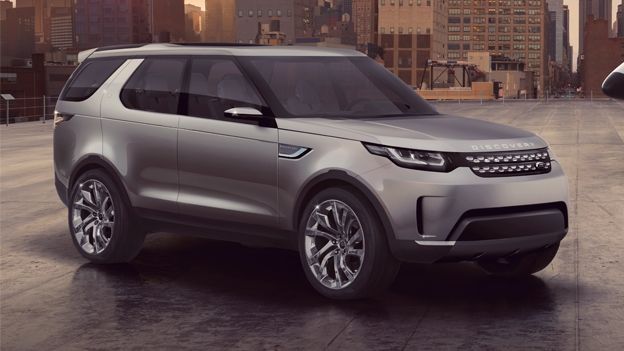 The New York Auto Show is just a few days away and already it looks like Land Rover, Toyota, BMW and Chevrolet all have new cars to unveil

The New York Auto Show 2014 will officially open its doors next week where the world's major car manufacturers will unveil not only their latest new cars but also their hottest concepts including an all-new Land Rover Discovery as well as the highly-anticipated new Toyota Supra.

With Geneva giving us the first glimpse of Apple's iOS CarPlay technology the pressure is on for New York to try and top it, could Microsoft give their first hands-on demo of Windows in the car?

For now though here's the hottest motors we think you should look out for next week:

Easily one of the most surprising announcements has come from Land Rover which has unveiled its Discovery Vision Concept car boasting remote control technology as well as an 'invisible bonnet' thanks to a state-of-the-art HUD on the windscreen.

The car is a showcase of future technologies that'll be featuring on Land Rover's new cars including Laser Headlamps which can block out the light for incoming drivers as well as gesture control - letting you change the tint on your windows simply by waving your hands.

Again, little is know about the upcoming Chevrolet Corvette concept other than the fact it'll be drastically different from the previous concepts like the Z06 which was entirely track-focused.

There has been some rumour circling that Chevvy might unveil a Coupe version with the non-removeable hard-top turning it into a muscle-car-cum-GT hybrid.

Naturally though you can rest assured it'll come with the latest technology from Chevrolet including a HUD and large-screen media interface.

Definitely a fan-favourite is the arrival of the BMW M4 Convertible. With the M4 Coupe already out in the wild the Convertible is now ready to make its debut at the New York Motor Show.

In terms of power BMW hasn't sacrificed a thing, you'll still get the same twin-turbo 3-litre engine tuned to produce 425bhp. You'll then have the option of a six-speed manual or seven-speed dual-clutch M-DCT transmission controlled by the paddles behind the wheel.

The roof is the star though - retractable in 20 seconds at speeds of up to 11mph, whilst lowering the roof only sacrifices half of the boot space. Sounds like a winner to us.

Now this has been a long long time coming. So much so that we actually penned the Toyota Supra as arriving last year. Well that date came and went

What we do know is that Toyota has a stunning concept car - the FT-1 which it has been proudly showing off since Detroit of this year.

Toyota themselves have admitted that the FT-1 has been designed for the same segment in the market as the Supra but are still refusing to acknowledge whether it'll go into production.

With a heads-up display and a steering wheel peppered with more controls than an Apollo spacecraft it sure looks like Toyota is planning on putting something resembling the FT-1 into production.

For now though you'll actually be able to drive the FT-1 if you have Gran Turismo 6 as Toyota have added the car as a downloadable extra.

The workhorse for many a family the Outback is as much a staple of country life as the Defender and now it looks as though Subaru is ready to give the Outback a bit of a redesign.

With a functional design at present it looks like Subaru is going to reskin the new 2015 Outback with a redesign that brings it much more in line with the new American Legacy model.

What that means is a totally redesigned front grill as well as some serious changes in bodywork. Looking more like a muscular version of their road-based cars the new Outback will still feature 'Car-like handling' whilst remaining a true SUV.

There's no word on in-car tech but it's almost certain that any 2015 model, especially one like the Outback will come packed with technology as standard.