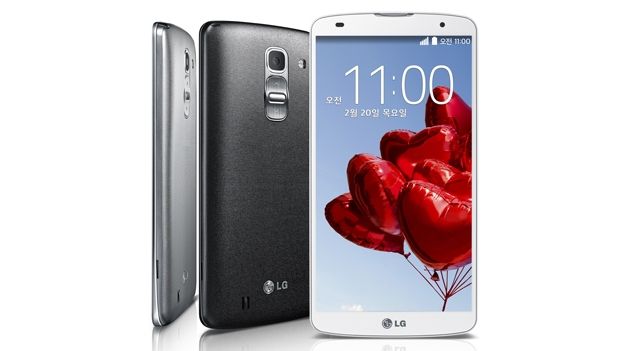 LG has announced the LG G Pro 2, a 5.9-inch smartphone with Android KitKat that looks set to take on the Samsung Galaxy Round, HTC One max and Sony Xperia Z Ultra.

The LG G Pro 2 comes with a range of new updates on the previous model including a new 5.9-inch Full-HD display with 3.3mm bezel giving you a rather impressive screen-to-frame ratio of 77 per cent which should mean more screen and less clutter.

Power is catered for thanks to a 2.26GHz quad-core processor and 3GB of RAM, there's also a 3,200mAh removable battery.

You'll also get a new feature called Knock Code which lets you power on and unlock the phone just by entering a personalised set of 'knock's onto the display with the phone intelligently recognising the pattern, number and rhythm.

In what is surely a preemptive effort to take on the HTC One 2 the LG G Pro 2 comes with a new 13MP OIS+ sensor that lets you adjust the focus after having taken the shot. You'll also be able to shoot 4K video and record in 120FPS HD.

The LG G Pro 2 will only be available in Korea for the moment but with the impending arrival of the LG G3 and the LG G2 MINI there's every possibility it could be getting an international launch as well.