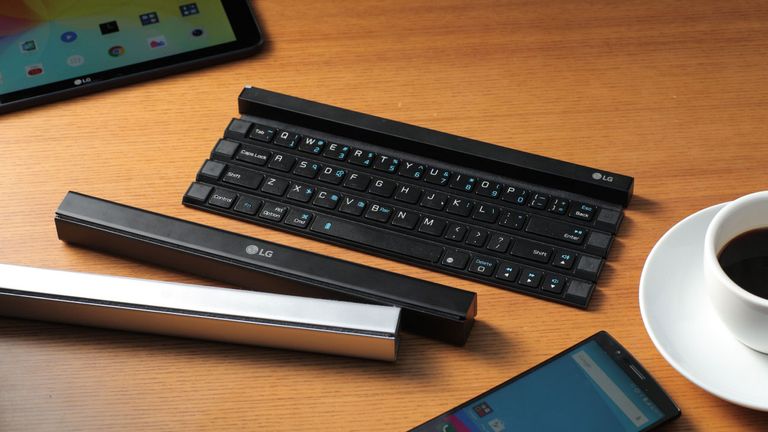 Full-size keyboards are great when you need to do a lot of typing, but they've never really been particularly portable. It may not be a problem faced by many, yet LG has still gone ahead and provided a solution.

Billed as a pocket friendly keyboard, the imaginatively named LG Rolly Keyboard sports a slender cuboid design which sees four rows of keys wrap round its quartet of long sides.

The keys boast a 17mm pitch which LG says is almost as generous as the 18mm offering on desktop boards, and should provide decent travel and tactile feedback.

You don't get the numbers or F keys rows, with numbers accessible via the Fn button and the top row of the QWERTY layout. The enter key is also only one row high, with the delete button smaller and potentially in danger of being hit as your reach for the return button.

There's a stand built into the board, allowing you to prop up your smartphone or tablet. Bluetooth 3.0 provides the connection between keys and mobile device, but instead of a rechargeable battery in the Rolly Keyboard you'll have to fit it with a single AAA battery.

LG claims the battery will be good for up to three months of usage, but that obviously depends on how frequently you whip out your keyboard stick.

It's not exactly small, so slipping this into your pocket will result in a noticeable bulge - just think of the looks you'll get walking down the street.

There's no word on price just yet, but the Rolly Keyboard will launch in the US this September, with markets in Europe, Asia and Latin America following in the final few months of 2015.

And while we're talking LG, check out our LG G4 review.