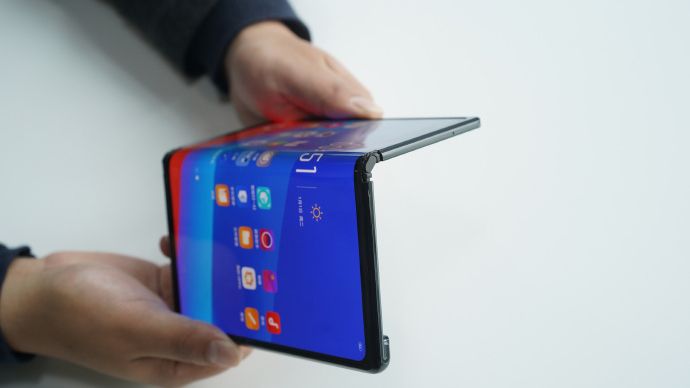 Oppo is hard at work on its first foldable smartphone to take on the likes of the Samsung Galaxy Fold, Huawei Mate X and Royole FlexPai. The device was revealed in a series of new photographs which were posted online earlier today.

The low-resolution images reveal a new prototype with a flexible display that bends around the outside of the handset, like the Huawei Mate X and Royole FlexPai.

Oppo Vice President Brian Shen shared the photographs of the as-yet unnamed handset on Chinese social network Weibo. The device has an almost identical industrial design to the Huawei Mate X. Not only does it have the same outside fold, but it uses the same wedge-like sidebar/handle on one side of the device which houses the cameras, ports, power button, and cameras – just like the Mate X.

That said, the Oppo-branded device looks like it has a slightly bigger screen than the Huawei Mate X, which has an 8-inch "FullView" screen with 8:7.1 aspect ratio.

However, Oppo doesn't sound anywhere near as enthusiastic as Huawei about the prospect of foldable phones. In a recent post on Weibo, VP Brian Shen said Oppo does not believe that foldable phones currently offer many improvements for its customers. That's why Oppo will not be mass-producing a folding device quite yet, the company Vice President has confirmed.

Oppo does not rule-out ever releasing a foldable flagship phone. After all, the company clearly has working prototypes in the R&D department. Oppo says it will observe the response from consumers to the first glut of folding phones before it starts firing up the factory to produce its own foldable handset.

As such, we wouldn't hold our breath for any specifics about the internals and design of the folding Oppo smartphone anytime soon. Meanwhile, you can read all about the eerily-similar Huawei Mate X right here.