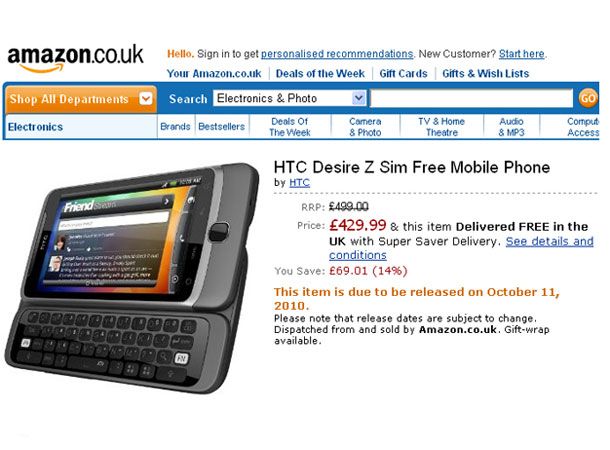 The recently revealed Android 2.2 touting HTC Desire Z has appeared on the website of online retailer Amazon.co.uk where its upcoming release information appears to have been leaked with a £429.99 price tag and October 11th launch date attached.

Whilst HTC confirmed that the HTC Desire Z along with the HTC Desire HD, both of which were unveiled at the Taiwanese company's conference in London this week, would be launched next month, exact dates and pricings have remained a mystery until Amazon's claimed details.

Although Amazon is offering the Desire Z at a shade under £430 the website claims the handset will actually retail for a hefty £499.

Unveiled alongside the Desire HD the Z will feature a rather neat looking hinged 3.7-inch capacitive touchscreen display. Sadly due to the manufacturing issues HTC has encountered with previous models, the Desire Z will not feature the stunning AMOLED screen seen on its phenomenally successful predecessor.

The unique mechanism on the Desire Z's hinged display works to revel a full QWERTY keyboard with separate, programmable buttons that will act as shortcuts to a range of applications, menus and programmes installed upon the device. Around the back the Z will be equally impressive as it sports a 5-megapixel camera with flash as well as featuring 720p HD video recording capabilities. Under the bonnet the Z will play host to Google's Android 2.2 FroYo operating system with HTC's new Sense UI and an 800MHz Qualcomm processor.

Officially word on a confirmed price and release date for the HTC Desire Z is still to come from the handset's manufacturer. For all the latest developments stay tuned to T3 and the T3 Twitter and Facebook feeds.