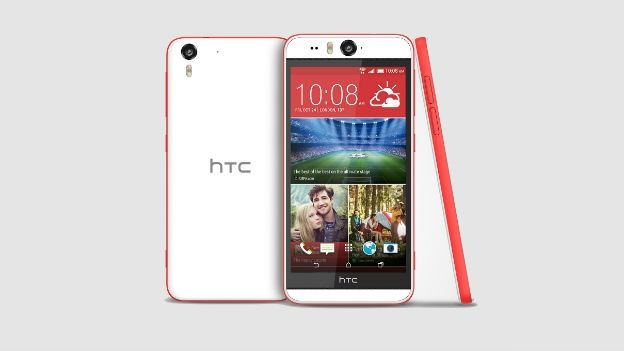 HTC has revealed its latest Desire smartphone, alongside an interestingly shaped new action camera, at an event in New York.

As the leaks hinted, the 5.2-inch Desire Eye is looking to capitalise on the selfie trend with a front-facing 13MP camera complete with dual-LED flash.

Despite not being the latest One flagship device from the Taiwanese firm, the Desire Eye isn't short of headline specs. It's got a 2.3GHz Qualcomm Snapdragon 801 processor, 2GB of RAM and 16GB of storage - upgradeable via microSD.

Being part of the Desire range, there's no shiny aluminium casing to swoon over. Instead, the Desire Eye is forged from polycarbonate – boasting an IPX7 waterproof rating and a choice of either red/white or light blue/dark blue colour options.

All of which are just distractions from the phone's main USP: dual 13MP cameras. There are some neat tricks, such as the “split selfie” mode, that lets you take a picture simultaneously with the back and front cameras. Both front and back are also capable of recording 1080p video and face detection means multiple people can video call using just one handset.

The display, likewise is a Full HD affair, and HTC has fitted the Desire Eye with a 2,400mAh battery. The phone will ship running Android 4.4 and HTC's Sense 6 UI on top. Although, as yet, the company hasn't revealed pricing and a firm release date.

HTC also clearly had its Eye on GoPro, as the firm revealed it's first ever action camera. Dubbed the HTC RE, it's a curving one-buttoned device with a 146-degree super wide-angle f/2.8 lens. Inside is a 16MP sensor and a 820mAh battery.

Apparently planning to “RE-imagine” the way we capture video, the HTC RE captures an image with one press of the single button and will record video with a long press.

There's no zoom, no display and no power button while storage is handled via microSD – HTC includes an 8GB card with the camera.

It's not going to replace your regular camera – or even your smarthphone – any time soon, but HTC obviously believes there's space for another affordable action camera out there.

What do you think? Let us know in the comments section below.