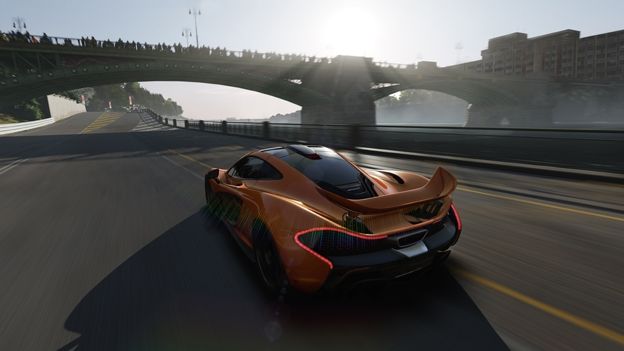 Turn 10's Forza 5 will be one of the major flagship titles launching on Microsoft's Xbox One. Where previous versions have always been heralded as the best in graphical fidelity on a console Forza 5 looks set to be as much about the people as it is the cars.

T3 sat down with Forza 5's Game Director, Dan Greenawalt, a man whose passion for Forza is equaled only by his ambitions for where the franchise will go, especially now that they have the next-generation Xbox One at their disposal.

Read on to learn about how gamers had already seen next-gen graphics in Forza 4 and why the idea that the cloud will improve graphics is in fact completely missing the point.

Could you explain a little about the preparation that went into creating Forza 5?

So if you look at Forza Motorsport 4 we had a feature called AutoVista there were 26 cars in Auto Vista, it was very interactive, the cars were also very polygonally dense and they had high-texture resolution, in many ways you can look at those cars as the prototypes for the cars you now see in Forza Motorsport 5.

Because the truth is they were, we were already working on the Xbox One before it was announced because we're an internal team so we're trying to figure out what's the next-generation graphically going to be all about.

What lessons did you learn about creating a game for the next-generation?

So to make a long story longer, I believe the answer to your questions is 'we learned that the next-gen graphics was about imperfection. It was about something that Hollywood knew in Pixar about eight years ago. It's the pores, it's the irregularity of your stubble it's the things that make eyes look in different directions, and we're so hardwired to see those imperfections.

We see these in cars everyday, so [for example] car paint: 'orange peel' has three layers, and we look at it every day and never think about it, we never take a closer look, but we know it, and if it looks perfect then we know it isn't real.

So in Forza 5 we simulate all three layers of paint, we have a base coat, a metal flec and then a clear coat on top that has these warbles so it makes it look like it was touched by human hands, now if I was going to show it to you I'd have to pull the camera really in close to the car and you'd go 'oh I see the imperfection' but the truth is that when I pull it out, it looks more real, because we're very good at realising those imperfections. And then of course we run at 1080p 60fps, and all of that takes a lot of power and the 60fps really matters when you're traveling at such high speeds.

Moving on to cloud-gaming with Xbox One, with UK broadband speeds still not up to scratch in some places do you not feel limited by the fact worldwide internet speeds vary so greatly?

I don't particularly feel limited at this point by speeds, and there's a really obvious reason why if I lay it out, the Xbox 360 when it launched, all the way to now which is seven years later, the graphical fidelity has gone up but the box is the same power, what we've learnt is how to use that power better. With the Xbox One we're using 100 percent of the power but we're not using it as well or as efficiently as we would be in say five.

None of that is the cloud, so I know how quickly we'll learn to be efficient. With the cloud though, we've never done this before as an industry, we've never gotten the best brains, all working together and bouncing ideas off of each other. So I've got places I want us to go but I actually believe that my imagination pales in comparison to my industry and how we will inspire each other over the next few years. So right now I actually don't think it's the broadband speeds that are limiting us I believe it's our own imagination.

No matter how good the broadband speeds get, I don't see them in the next couple of years, five years even being in a place where it's asynchronous and it's literally offloading millisecond processing to the cloud.

You gotta use the tools for what they're good for. The cloud is not – at least not for the next few years – going to be good for offloading these microseconds, what it can do is apply a massive amount of processing over a course of a second or two, and then you're able to download it.

So what we're able to do in Drivatar – and again I think this is in its infancy – is that we do a little local processing, we upload a small amount of data and then you've got millions and millions of data points that the processing in the cloud can just crunch on and it can do it pretty fast. So lets say we have four times the pipe, so that means we'll do a little bit more data up and a little bit more data down but the true revolution is in how we use the mass in the cloud.

With Drivatar creating AIs of real people have you ever thought about letting players compete against, say, professional racing drivers?

We've done it! So right now there's around 400 people playing the game and that is the cloud, each one of us are uploading telemetry and that's making the system better, and then when the system learns a new trait our individual Drivatar can then tell the system that 'I do this some percentage of the time' or not.

So the most important thing is to have a very diverse group in that 400 because as we go to a million we're not going to be adding a lot of new behaviour because the 400 represented the million effectively. So that means that even in our 400 right now we needed to make sure we had five year old kids, we needed to make sure we had professional drivers.

So we've had professional drivers driving around now and our AI is already doing some very complex behaviour, I can't get my Drivatar to do it, because I can't do it, but a pro-driver can get his Drivatar to do it because several pro-drivers trained the system to learn that overall behaviour.

The funny thing is they drive more like machines than the Drivatars in my group. So lets say I'm in the middle somewhere, the Drivatars at my level are the most human-looking, the Drivatars at the lowest level do stupid things because they're being trained by people who are often inattentive, or really young, and then the highest level, they can paint a tyre track on the same pixel of the track lap after lap so they're almost inhuman.