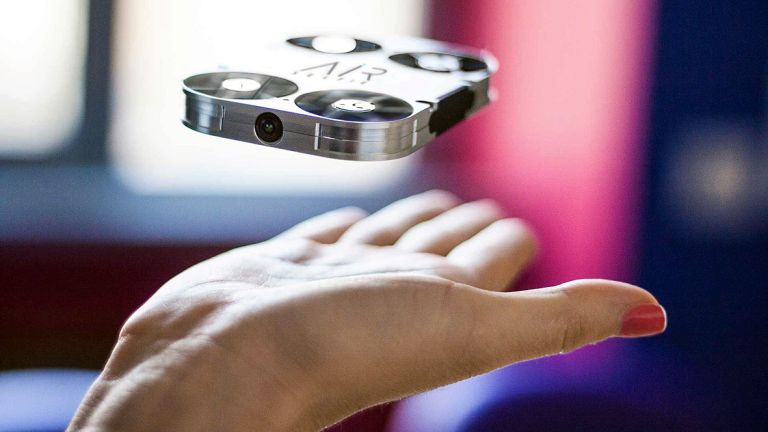 Drones are everywhere, these days. They're in the skies, in the news and so far, not even the idiots hanging around airports trying to get footage of 747s taking off have managed to spark an international incident.

But what do you need to know when out shopping for a flying Unmanned Autonomous Vehicle (UAV is the 'correct' term for a drone)? We'll tell you what: the following essential facts, served up by our man with the twitchy thumbs, Derek Adams.

When it comes to shooting aerial video and stills, there’s a wide choice of small GPS-equipped drones out there that will perform the task.

Some consumer platforms still use a GoPro camera mounted to a three-axis stabilising gimbal, or you can opt for GoPro’s own Karma drone.

The GoPro’s size, light weight and ability to shoot medium-resolution stills as well as HD and 4K video makes it ideal for consumer-level videography and stills photography. If you already own one of the ubiquitous action cams, buying a compatible flyer could be one way of keeping your costs down.

However, the majority of aerial video fans opt for models with built-in, 4K cameras that seamlessly stream all flight parameters and stable visual feeds to a humble tablet or smartphone. DJI leads the way in this respect with a roster of extremely reliable, easy-to-use camera drones that won’t completely break the bank. Although, no, they aren't cheap.

Sadly, some manufacturers are well behind the curve when it comes to integration between the craft and the pilot, and that is often reflected in lower prices. However, buyer beware: you should look these gift horses very carefully in the mouth.

Such drones might seem attractively priced but very often they will just frustrate the user with an overload of unintuitive technical jargon and a poor user interface between the craft, the camera and the pilot.

Few would have guessed that, within four years of DJI launching its first aerial video UAV, we’d be savouring the thrill of having an autonomous robot camera flying alongside us, filming our outdoor pursuits from perspectives never previously imagined. Whether you’re mountain biking, surfing, skiing, jogging or simply chilling on the beach, there are a growing number of flying cameras out there that will happily tag along.

Even more autonomous drones today fall into the ‘selfie’ category. These are small pocket drones that can be used with a smartphone app, a dedicated hand controller and, in some cases, no electronic control system at all.

The vast majority of autonomous models are operated via a mobile device app and require nothing more than a few taps of a screen. Preset flight parameters usually include ‘follow me’, where the drone literally tracks the user from either behind or just to the side, and ‘orbit’, which commands the craft to fly in a circle with the camera pointing at the user below.

You’re not going to get consistently amazing video footage from the majority of selfie drones, but you can end up with footage that would be otherwise unfilmable without bringing a dedicated camera crew with you every time you go mountain biking or whatever.

Smaller selfie cams are even worse for video as the image is likely to jitter as the tiny drone bounces around in the air. However, they’re excellent for taking snap shots. Expect a maximum flying distance of about 100 metres.

If you're a speed freak, in the legal sense of that term, and want to enjoy the thrill of flying, but have no desire to shoot video and stills from the air, consider a racing drone.

These small quadcopters are purpose-built for high speed manoeuvres and often custom-assembled by their owners, but there are many ready-to-fly (RTF) models available, too.

Racing drones lack GPS but are equipped with a camera. However, this isn’t for getting atmospheric arial footage of your sister’s wedding. No, it’s so you can see where you're going, via an FPV (First Person View) headset – essentially, a repurposed pair of VR goggles – that receives live footage from the nose of the craft. FPV flying takes a lot of practice but, once mastered, it’s a hugely exciting pursuit, full of adrenaline-pumping action.

As a beginner, your best bet is to join a local racing club where you can fly safely in a professionally monitored environment, usually a disused factory or plot of land filled with various obstacles. Get good at it and, who knows, your aerial exploits might just take you to an international event like the Dubai World Drone Prix where, as you'd imagine for an event in Dubai, the prize money on offer is not modest.

Many first-time buyers opt for a toy UAV so they can get a handle on the control system in readiness for one of the bigger boys.

Bear in mind that most sub-£75 craft do not come with onboard altitude stability sensors, let alone GPS positioning. The smallest thumb-sized toy drones may look very appealing but don’t expect them to hover in one spot with your fingers off the sticks; these things require constant adjustment of the sticks and plenty of patience to keep them airborne.

Things improve immeasurably once you reach the £100 mark. At this price level you can expect a drone equipped with ultrasound sensors that keep the craft in a (more or less) rock steady hover with no input required from you. Parrot leads the way in this respect with a raft of clever indoor and outdoor drones that are both easy to fly and excellent to learn on.