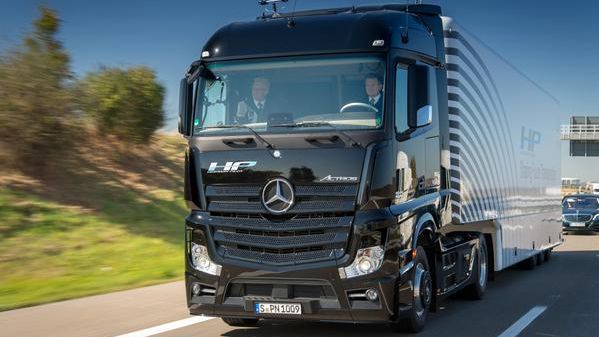 German automaker Daimer has tested its very first self-driven truck. While the truck needed crew support, it steered itself for the very first time down a section of a German motorway.

The truck steered itself through a section on the motorway with a combination of on-on-board tech: a radar, stereo camera, array and cruise control.

A board member responsible for Daimler' trucks hailed the event as a further step towards the safe, sustainable road freight transport of the future.

The next step for Daimler is to start testing autonomous trucks in real traffic, in a bid to produce this technology for the mass market. Although it's the first time this sort of technology has been introduced to trucks on a large scale, don't expect to drive past driverless lorries on UK motorways anytime soon.

For the test to even take place Daimler had to seek permission; European law won't permit regular autonomous truck driving on European roads, so it looks like it could take years before this kind of tech hits us.

Still, imagine the impact fully autonomous trucks would have on the UK; the costs for major haulage companies could get a whole lot less. However driving next to a self-driven truck would still terrify us.