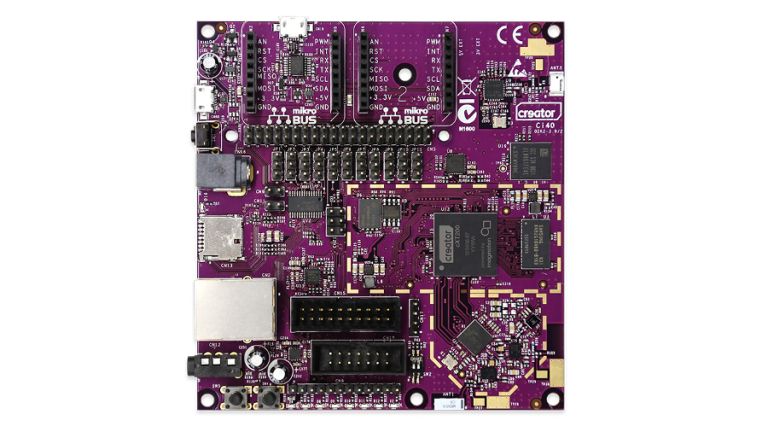 A new Raspberry Pi-like board from Imagination Technologies is set to spur on the proliferation of devices hooked up to the Internet of Things in the future.

As you're doubtless aware, the Internet of Things (IoT) simply refers to all the many devices which are now going online – from industrial machines through to wearables and gadgets in the home such as smart fridges.

Imagination's new Creator Ci40 board (pictured above) is the follow-up to the Ci20, and it has a 550MHz dual-core processor optimised specifically for IoT applications.

This isn't just about the hardware though, as Imagination is selling the Creator as a development kit, with not just the board – and expansion boards plus sensors like temperature and motion – included, but also the open source software and a cloud platform (called FlowCloud) to run all the hardware.

The Creator Ci40 boasts 802.11ac Wi-Fi and Bluetooth 4.1, and acts as an IoT hub that's wirelessly connected to standalone gadgets which are built with the expansion boards – and indeed other wireless devices. The hub can then process sensor readings from these devices and is hooked up to Imagination's cloud platform which provides further (more powerful) number-crunching and analysis tricks.

Imagination is shooting for user-friendliness too, as the hardware is modular and designed to be simple enough to put together, helping speed the prototyping and development of IoT solutions.

There are a huge range of areas where this kit could be used – everything from health monitoring and security and surveillance.

Imagination gives a number of examples of how its FlowCloud platform can be used, including one example project in the smart home by the name of PowerBox. This monitors the amount of power used by home appliances, sending the user an alarm if a set limit for an appliance's power usage is exceeded, and also allows for functions such as a timer that can be set to turn on a gadget when electricity is running on a cheaper rate.

All these sort of neat smart home ideas could become a reality quicker with the Creator Ci40 being made available to developers.

The project has just gone live on Kickstarter, and you can currently grab a Creator Ci40 development kit for £70 plus £12 shipping. The expected date for delivery is April 2016.

Also check out: The Raspberry Pi now has its very own touchscreen