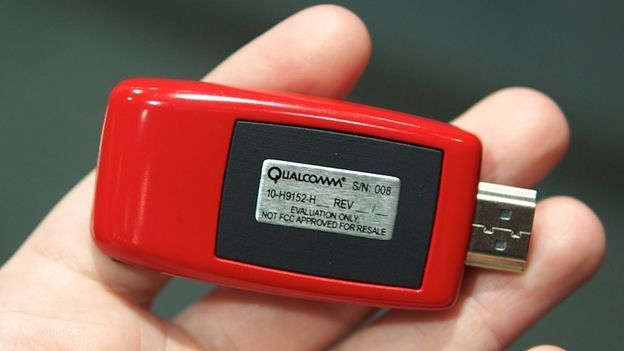 Qualcomm is most famous for making the chips that run phones like the Samsung Galaxy S5 and pretty much every other smartphone on the market. Now though, it's putting its chips into media streaming.

In what appears to be a competitor for Google's Chromecast, Qualcomm has shown SlashGear a prototype of its new streaming stick. The device is powered by one of the company's Snapdragon 800 chips, the same as you'd find in the Samsung Galaxy Note 3 and other high-end smartphone from last year.

And like those phones, the Qualcomm demo was shown to run Android too. Either a full version of the mobile OS, or a more cutdown version is possible, with that decision being left to manufacturers. Qualcomm says that some want to build a device much like Google's product, and just rely on users phones to send content. Others may opt for an Android TV experience. Either way, Qualcomm won't make the device itself, letting others handle that from its reference design.

Third-party companies can add things as they see fit. That might include support for USB hard drives or other accessories. The best bit, perhaps, is that the device can handle video at up to 4K resolutions. That will give you access to Netflix and YouTube content in the best possible quality. Of course many 4K TVs have smart functionality that allows this, but who knows what other services it might bring.

It's also interesting to note that along with regular 802.11ac Wi-Fi, the Qualcomm device can, as you might expect, support a number of options for 4G. That could, possibly, open up the devices to get their content from 4G broadcasts over the air. That's something that hasn't been explored in the UK yet, but it could bring more video content to your TV, and perhaps in 4K too. The only problem is bandwidth, but the inclusion of something called LTE-U (the U means "unlicenced") can help create more bandwidth for this and other devices like it.