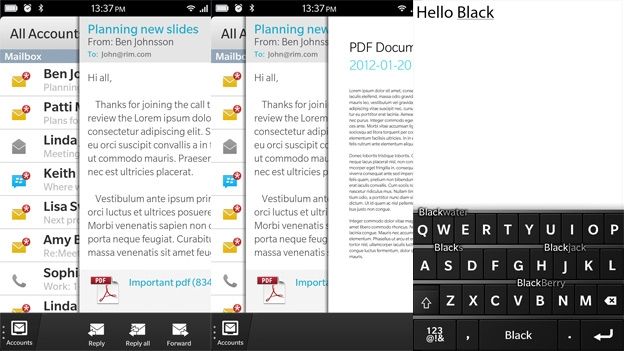 Only with BlackBerry can you have a story which is focused around the keyboard. Helping us make sense of the tech behind it was RIM's Vivek Bhardwaj

BlackBerry 10 OS will feature the famous BlackBerry keyboard but in touchscreen form, having been given a complete overhaul the company is resting everything on this feature living up to the reputation they already hold.

Speaking to T3 was RIM's Vivek Bhardwaj who was able to explain further what makes this feature not only so unique to BlackBerry 10 but also why they think it's the solution to the 'keyboard problem' that plagues touchscreen smartphones.

"We took a fair amount of time to really figure out what makes our keyboards so good, and how do we bring that to touch, I don't feel anyone's really mastered that yet."

"What we've done is, imagine if there's a second keyboard that's underneath the UI that the user never really see's. What it allows you to do is start hitting the keys and everyone's different, their thumbs come in at different angles, they're different sizes so naturally when you say, hit a 'Y' key you might hit it slightly to the left."

"We'll learn that, and imagine that there's another key underneath that and it then moves, so that the system reads it as centered and perfect."

Secondly and most impressively is the Fluency Engine and Contextual Awareness, both of which are the technologies that allow you to literally 'throw' words up into the text area (as seen in the video below).

"We have contextual awareness of previous words and subsequent words. One of the great things is we're doing is we're personalising this for you even further."

"What we're going to do is out of the box is have the inbuilt Fluency Engine will do a scan of all your email, SMS, BBM, Twitter and Facebook and it'll flood the fluency engine with the way you type and the words you use."