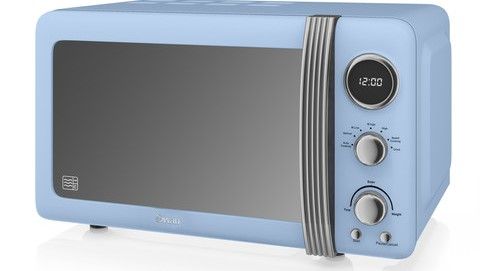 If you're in the market for a microwave right now, the Swan Retro Digital should be the first you look at purchasing. This decision is based on our own personal tests conducted with the five microwaves below, which we brought in for review after looking at reviews online.

However, although we prefer the Swan, there is a valid reason to consider each and every microwave on this list. Some have a much higher capacity, others offer more accurate timers, and a couple wowed us with the effortless simplicity of their controls.

Making it onto this list in the first place is an impressive feat in of itself, and although we've crowned a winner, any one of these microwaves would make a fine addition to your kitchen.

How we chose the best microwave

Ultimately we chose the Swan Retro Digital over the other four because of the way it managed to keep its controls simple without sacrificing the precision that users often need from a microwave.

It integrates a digital display well into its retro aesthetic, and has everything we'd reasonably expect a microwave to include including program modes for a variety of foods including popcorn and fish.

But outside of its expansive functionality, the Swan Retro Digital is simply incredibly easy to use. It controls are all remarkably responsive, and each dial has a satisfying click as it turns.

That's not to say that the other microwaves on this list are without merit. The Russell Hobbs RHM2362S's massive 23 litre capacity should satisfy households that need to microwave a large quantity of food at a time, and the Philips NN-E271 WMBPQ has enough program cook modes to satisfy any conceivable need.

Meanwhile the Daewoo KOR6L77 may not be the most attractive microwave we tested, but its simple controls are a snap for anyone who wants to get their food cooking quickly, and the Russell Hobbs RHMM701C's retro styling may not be quite as accomplished as the Swan Retro, but it does manage to have controls that are lovely and responsive.

All our top five picks should be available from most major online outlets, but should you choose to go 'off piste' with your next microwave purchase then our tests did reveal some key features to watch out for.

The egg timer style dial which many microwaves employ to allow you to set the amount of time your food will be heated for is both a blessing and a curse. They're very easy to use, and allow you to easily add more time to your meal if you feel it needs it, but on the other hand they tend to lack the exactness of their digital counterparts.

On balance we valued the convenience they offered over the digital alternatives, but if you're someone who prefers to follow microwaving instructions to the letter then we'd advise you to stick with a digital timer.

Meanwhile program modes, which allow you to automate your microwaving by inputting the type of food and the weight, remain divisive. A quick straw poll of the office revealed that only one person used the program functionality on their microwave at home, with most people in the office opting to rely completely on just power and time settings.

Not worrying about automatic programs will take a lot of the stress out of a microwave purchase, since this is a big point of differentiation between the different models. Ignoring them allows you to focus on features such as controls, aesthetics, and capacity.

Finally, on the issue of dial vs button controls, we found dials to be overall much more responsive, but buttons are undeniably much easier to clean since they're often completely flush with the front surface of the unit.

The program modes may have their quirks, but if you're using the standard cooking modes on the Swan Retro Digital then you'll find it to be a remarkably easy to use microwave. The settings are all well labelled, and the controls are satisfying and responsive. Best of all the digital display really takes the guesswork out of the dial controls.

It might not look exciting, but the Daewoo KOR6L77 is a capable microwave for those that don't need too many advanced features. The controls, though not as exact as a digital display, are easy to use, although the icons may mystify you the first couple of times you look at them.

// The Russell Hobbs RHMM701R is a simple, retro microwave, with all of the benefits and drawbacks that come with this decision. If you want a microwave with simple controls that will reheat, defrost or cook your food with a minimum of fuss then it will serve you remarkably well. If however, you want to have more exact control over your cooking, or keep a close eye on your food or how much longer it has to cook, then the simplicity of the RHMM701R may frustrate you.

The Russell Hobbs RHM2362S has one thing going for it, its size. If you need a whole 23 litres worth of microwaving capacity then this microwave is an obvious. Unfortunately, if size isn't a priority, then this microwave has little else going for it. Its controls are tricky to get the hang of, and frankly it's not much of a looker.

The Panasonic NN-E271W isn't a terrible microwave. It's got a decent array of program modes, and its digital display is easy to read and will be easy to clean should any food splatter on it. Ultimately though there are microwaves on this list that are simply easier to control, and we'd probably have to recommend that you opt for one of them over this one.

Check out our main guide to the best microwave