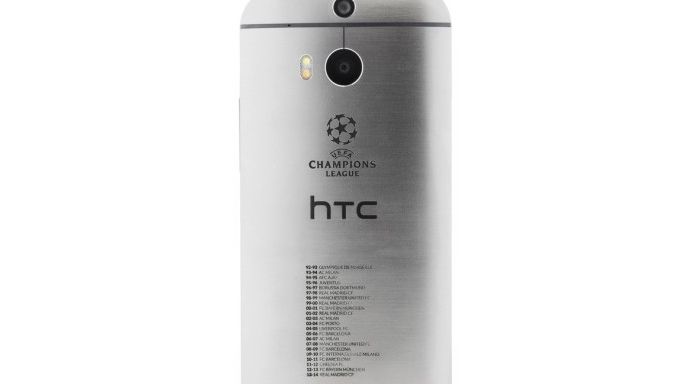 Ah football, don't you just love it? The way the foot interacts with the ball, the green grass of the pitch, the shrill blow of a ref's whistle, the camaraderie of a tightly-packed train in the Paris Metro. Well...maybe not that.

This extremely limited edition smartphone comes engraved with not only the Champions League logo (which looks like a football!), but also the name of every Champions League winning team from Marseille in 1992 to Real's win last season, all etched into the aluminium chassis in text so small that an ant would need reading glasses to make it out, if ants could read and wear glasses.

Worried that your UEFA Champions League engraved HTC One M8 will be out of dateas soon as the next Chapions League crowns its winner? Don't be as HTC's baffling decision to use its ageing HTC One M8 handset, rather than the upcoming HTC One M9, means that this is already a pretty dated phone.

This is the phone to prove beyond all doubt that you are completely committed to the sport of soccarball. The only problem is that this phone will be in such limited supply you'll have to stop thinking about sportsball for a few moments and check HTC's Facebook, Twitter and Google+ pages to find out how to win one.

Now let's all pretend we remember what Google+ is.

The proud history of gadgets with football-inspired special editions

Not too convinced by the UEFA Champions League engraved HTC One M8? If you're after technology to prove you really do love the beautiful game, here's some alternatives.

You've got the England shirt on, your face is painted with the flag of St George and you're wearing a red and white wig... but something is missing. What else can you do to prove your allegiance to the world's most consistently disappointing team?

Why not grab these limited edition England headphones from Sol Republic, which will show off your patriotic pride while you listen to Three Lions by Baddiel, Skinner and The Lightning Seeds on a loop?

For extra fun, wear these while holidaying in Scotland.

To celebrate last year's World Cup in Brazil Nike created a limited gold edition of its sport tracking band, engraved with the federation logo and a Brazilian 'picahau' graphic.

The band was handed out to the poor and needy footballers and staff of Brazil, England, France, and the US' football federation, which was nice as those guys really don't get the financial recognition they deserve.

More about HTC One M8