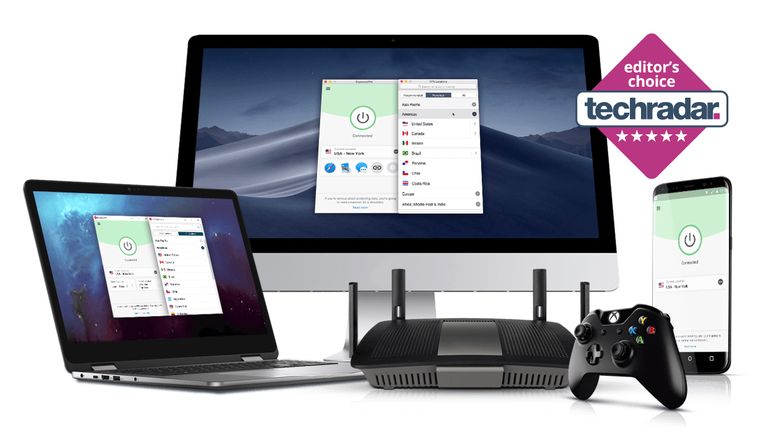 No matter where you go this Christmas, ExpressVPN can ensure that you never miss your favourite shows, movie premieres or sporting events. With over 3,000 VPN servers in 160 locations in 94 countries, you’ll be able to stream anything to anywhere – even if it’s blocked where you are right now.

And that’s not all. ExpressVPN can protect your privacy and give your internet an upgrade.

Watch what you want, where you want

Many streaming services use location services to work out where you are. Unfortunately that can be a problem if you’re travelling: for example a UK service might look at your location, say “that’s not a UK customer!” and block you from streaming anything at all.

It’s called Virtual Private Networking, VPN for short, and it’s brilliant. And a VPN doesn’t just make it easy to stream the movies, music and other media you want to enjoy. It also protects you from all kinds of online problems.

When you connect to ExpressVPN, you’re establishing a secure, completely private connection between your device and the site or service you’re using. That connection protects your internet activity from prying eyes by encrypting all your data– and the encryption that ExpressVPN uses is incredibly strong. ExpressVPN uses 256-bit AES encryption, the same security standard adopted by the US government and by security experts worldwide.

Encrypting your data means that ISPs can’t analyse it to slow down particular kinds of data, and it also means that bad actors can’t intercept your communications or your online banking. That means public Wi-Fi hotspots are no longer the electronic equivalent of swimming with sharks.

The speed you need

There’s no point in being able to access your favourite streaming service if all you get is buffering. That’s why ExpressVPN’s thousands of high-speed servers are strategically located all over the world to ensure a fast, reliable connection wherever you are and on whatever device you’re using. Whether it’s iOS or an Xbox, a phone or a PC, an e-reader or a router you can be sure of a fast, solid and secure connection every time.

ExpressVPN is first and foremost a privacy company. Its servers use what’s called TrustedServer technology designed specifically to protect your privacy: they never save anything to a hard disk, your data is never stored and when they reboot every single bit of data is permanently wiped.

ExpressVPN doesn’t just talk a good game. Unlike its rivals, it got independent auditors to test its privacy protection and published the results. Auditors from PWC tested ExpressVPN’s system and found that it keeps its privacy promises. You can see for yourself right here.

Any time, any device, anywhere

ExpressVPN works on Apple TV and Xbox, Smart TVs and Switch, PlayStations and streaming sticks. And your subscription can be used simultaneously on five different devices. You can even run it across your entire network by putting the ExpressVPN app on your router. No matter what device you use, your bandwidth is unlimited and free from interference. It’s simple to set up, incredibly easy to use and there’s 24/7 live support if you ever need some help.

Everything you need for an incredibly low price

We know what you’re thinking. It’s going to be expensive, isn’t it?

Nope. Running ExpressVPN every day across all your devices still costs less than a streaming subscription – and there’s even a 30-day money back guarantee for even more peace of mind.

If you want to stream stuff no matter where you happen to be, you need a VPN – and if you already have a VPN but it isn’t ExpressVPN, you need to switch. It’s simply the best VPN for streaming, for protecting your privacy and for giving your internet an upgrade. Click here to find out how ExpressVPN can make your internet better.