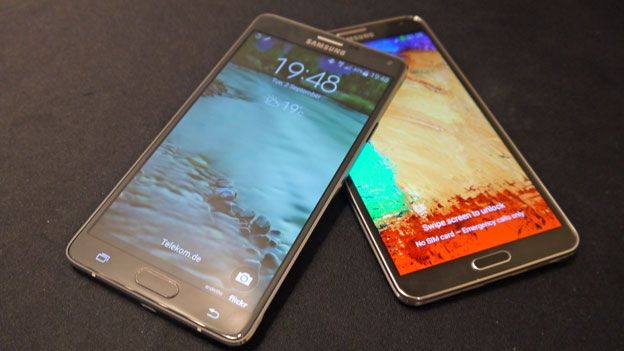 Samsung has just unpacked it's latest 'phablet' device at IFA 2014 in Berlin, the Galaxy Note 4. But how does it stack up against the outgoing Galaxy Note 3? Let's take a look. Check out our Samsung Galaxy Note 4: Hands on for an in-depth look.

Samsung has stuck with the same size screen as the Note 3, that's 5.7-inches if it had slipped your mind, but that doesn't mean everything is the same. Oh no. Instead of using a 1080p panel, Samsung has plumped for a Quad-HD Super AMOLED screen, with a seriously impressive 500ppi.

Colours should be sharp, vibrant and vivid and expect blacks to be inky.

Another nice change for the Galaxy Note 4 is the addition of an aluminium band, which wraps around the side of the phone. No longer do we have to suffer with that metal 'look' style of the Note 3.

The rear is still a textured leather look, though the fake stitching from the Note 3 has been stripped away, leaving a much simpler look.

We were massive fans of the 16-meg shooter on the Note 3 and it's no surprise really that the Korean company has stuck with the MP count for the 2014 model.

That doesn't mean everything is the same though. For one, Smart Optical Image Stabilisation has been added, ensuring your snaps are less blurry and even sharper when the sun goes down.

Moving to the front and there's an improved 3.7MP wide angle selfie camera complete with a special Wide Selfie Mode, for when you're trying to jam in as many people as possible. Another clever update is that you can use the heart rate monitor on the back as a makeshift camera shutter button.

As with any phone released by Samsung, you know it's going to have a whole host of extra goodies. Well, the Note 4 has truly outdone itself.

Upgrades from the Note 3 include a host of UX and interface tweaks, bringing it much more inline with the Galaxy S5 in terms of software.

Multi-Window has also been improved from last year, giving you more control over your windows and letting you size them any way you want.

Three new microphones allow an enhanced voice recording app to pick out particular parts of the conversation and a special interview mode uses noise cancelling tech to dial down into just the voices you want to hear. A big improvement over the Note 3.

Fitness fanatics will appreciate the heart rate monitor positioned under the camera, while the companion app S-Health has been updated with all the extra features from the Galaxy S5.

Now, another massive area of change this year is in the famed S-Pen stylus. Everything from pressure sensitivity to handwriting recognition has been improved, making text input more accurate. You can even use the S-Pen like a computer mouse for selecting multiple items at once. Handy.

The Note 3 was a speedy device, with a Snapdragon 800 processor and 3GB RAM, though we'd expect the Note 4 to be even nippier thanks to the spec boost.

Unlike the Note 3, which used a rather clunky Micro USB 3.0 charging port, the Note 4 has gone back to much more widely used Micro USB 2.0, though it has added some new fast charging tech that'll take you from 0% to 50% charge in around 30 minutes (it took about an hour with the Note 3).

While the battery itself has only jumped to 3,220 mAh from 3,200 mAh, Samsung has apparently better optimised the software so that it doesn't consume as much power, keeping you juiced up longer. For times when you're running low though, the Ultra Power Saving mode eeks even more juice out by turning off unnecessary functions.

It seems as though Samsung has improved almost every aspect of the Note 3 with the Note 4, adding everything from OIS to the camera, a Quad-HD display and a bunch of S-Pen improvements.

There's also the VR headset, a nifty looking accessory that uses the Note 4 as its display. Check out our Samsung Galaxy Note 4: Hands on and stay tuned for our full review.