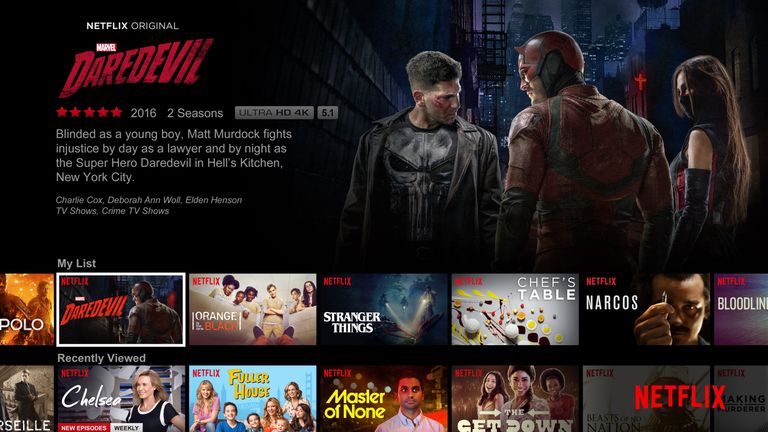 Right now you can’t move for original content on Netflix and Amazon Prime, whether it’s Netflix’s wildly divisive The OA, or Amazon Prime Video’s highbrow homerun The Man In The High Castle.

But those are the hits. What about the dozens of other series Netflix and Amazon have been flinging at the wall in an effort to see what sticks and nets those coveted viewing figures?

For every hit there are duds – look at how Netflix failed to find a wide enough audience for Hemlock Grove, or how Amazon became a laughing stock with Woody Allen’s Crisis in Six Scenes.

With all the recent talk about how Netflix is planning to spend $6 billion dollars (£4.9 billion) on new content this year, not to mention splurging on films, it’s easy to get cynical about why these companies are throwing cash into a seemingly bottomless pit of original content.

It’s a ratings war, right? A good old-fashioned dust up. Or is there more to it? And while we’re at it, do these newcomers to the TV and film world actually know what good content is? And are they delivering enough of it to tease viewers away from the familiar glow of traditional channels? Because, hey, let’s not forget the mighty Beeb in this battle royale...

To me, the BBC is still a bastion of quality content. Planet Earth II’s tense snake/iguana skirmish and high-def swimming sloths pushed the boundaries of documentary making. And shows like Sherlock and Call The Midwife are the calling cards of the broadcaster’s continued eye for drama that spears the heart.

Quality programming aside, does the Beeb (or ITV or Channel 4 for that matter) match Netflix or Amazon for sheer range of choice? I say no. I’m a binge watcher. With these sites there’s always something for me to get lost in, away from the regimented boundaries of ‘normal’ telly or the comparatively small offerings of iPlayer.

When the old Top Gear crew moved to Amazon for a fat wad of cash, it highlighted the power of streaming audiences. While The Grand Tour didn’t completely satisfy critics, record viewing figures justified the investment.

Other Amazon investments have paid off, too. In 2016 the company splurged $10m on the rights to American drama Manchester By The Sea. Not only did it net $40m at the cinema, the film is nominated for six Oscars, including Best Picture award.

It seems even Hollywood’s inner circle is acknowledging the taste-making possibilities of streaming sites.

Netflix’s The OA is carving up the net right now. Some proclaim it's pushing the envelope for TV. Others decry the show, singling it out as the problem with Netflix thinking it’s on a par with traditional studios; that half-baked provocation is the only way to land high viewing figures.

But here’s the thing… Throughout the history of cinema there have been as many flops as there have been successes. It's a natural journey in developing a platform: figuring out what people want and how best to deliver it to them (while making a healthy profit, sure). To do that, you have to experiment.

Netflix and Amazon should be encouraged to create, to break apart formulas and find The New. They are this generation’s equivalent of the picture house – and let’s not forget how pioneering that was.

If quantity is what's needed to draw viewers in, so be it, because quantity equals more viewers equals more money for exploration. It’s the means for Netflix and Amazon to stop throwing any old thing at the wall and instead get an informed sense of what us viewers want and how we want to consume it.

In every art form, quality is subjective. And who knows, the next Game of Thrones or The Sopranos could end up coming from Netflix or Amazon if they’re given the chance to push through the tiresome quantity vs quality stage and get to a space where Stranger Things is not even half of what they're capable of. Imagine how awesome that could be.