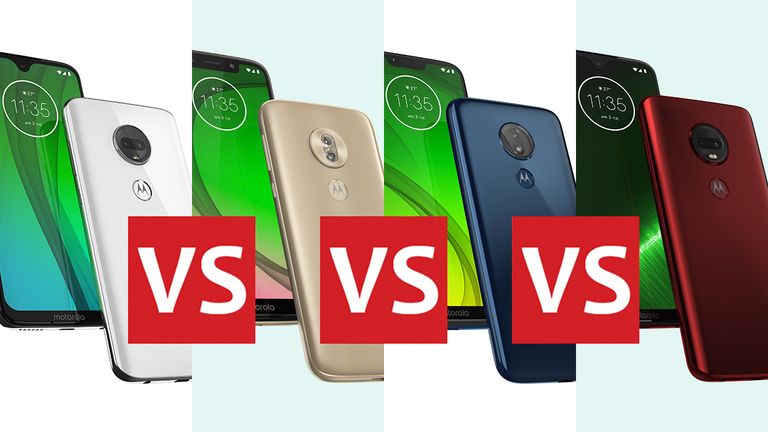 Back in February Lenovo-owned Motorola unveiled no fewer than four new G7 phones: the standard G7, the G7 Play, the G7 Power, and the G7 Plus. With so many good-value handsets to pick from, how do you start working out the differences between them all?

We're here to help you in your G7-induced confusion – we're going to lay out the specs and the features of each of the phones in the range so you know how to distinguish between them, and (if you're in the market) can pick out the right one for your next smartphone.

Before we get into the models themselves, we should quickly talk about what's the same across the board. All these phones offer fast charging but no wireless charging, for example, and all three are merely splash resistant rather than fully waterproof.

In a nod to smartphone tradition, all four phones have a microSD card slot for adding extra storage, and all four retain a 3.5mm headphone jack. What's more, you'll find the latest Android 9 Pie OS on all of these phones, so they're all equal from a software point of view.

The best G7 for most people

This is the biggest and most capable G7 in the range with the exception of the G7 Plus, but the differences aren't huge – and this one will be cheaper, so we reckon it's better value. That teardrop notch and those thin bezels add to this phone's strong sense of style too.

Substance is added with a Snapdragon 632 processor and 4GB of RAM, decent specs for a mid-ranger, and the 12MP+5MP dual-lens rear camera is one of the highlights of the handset as well. Probably the G7 that most buyers are going to be attracted towards.

Light, compact, cheap... the G7 Play is the G7 model to get if you want to spend as little money as possible. The Snapdragon 632 is the same as the standard G7, but the RAM gets knocked down to 2GB and there's only 32GB of internal storage supplied with the phone.

With a bigger notch and thicker bezels, it's not as nice-looking as the standard G7 either, and there's only a single-lens rear camera too. This all comes with a lower price tag of course, which means the phone is still good value if you don't have much of a budget.

The G7 that will last and last

As the name suggests, this G7 model is all about the power – specifically battery power, because there's a 5,000mAh battery packed in here, and Motorola says it can go for up to 60 hours between charges (perhaps the ideal smartphone for your next camping trip).

Elsewhere the internal specs and screen size are very similar to the standard G7, but you only set a single-lens 12MP snapper around the back of the phone. It uses the wider, old-school notch as well, so it's not quite got the aesthetic appeal of the G7 either.

The most premium of the G7 range

If you want the most powerful G7 model, this is the one, but it's not a massive upgrade over the standard G7. The processor is slightly faster, and the dual-lens rear camera is slightly better, but the two phones match each other equally in a lot of other areas.

The 6.2-inch screen size (and the resolution) is the same for example, as is the 3,000mAh battery, and the two phones have the same teardrop notch too. It might come down to the deals you can find online when it comes to choosing between the G7 and the G7 Plus.