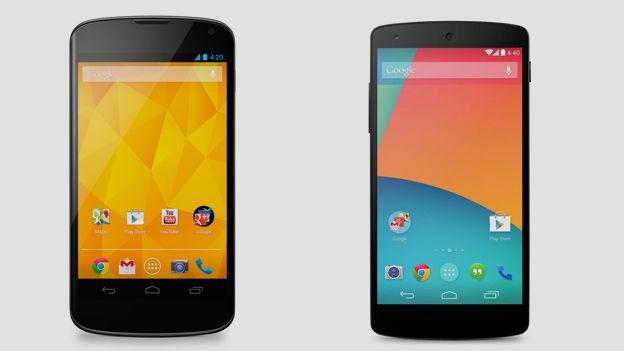 After months of leaks, rumours and anticipation, Google has finally taken the wraps of its brand-new flagship smartphone, the Android 4.4 Kit Kat toting Nexus 5. Check our out Google Nexus 5 review: hands on, for our first impressions.

So, it's finally here, the successor to the bargain Nexus 4, the Nexus 5 ups the specs in almost every area, including a bigger screen, faster processor and, hopefully, a better camera. It's also the first device running the latest version of Google's Android OS, 4.4 Kit Kat.

But, will it match up the likes of the HTC One, Sony Xperia Z1 and Apple's iPhone 5s? Read on for the full run-down of features, along with how it compares to the Nexus 4. You know you want to.

Last year's model, which was produced by LG, was a really well built device, which felt firm in the hand and really sturdy. Our only real gripe was that the glass on the back was prone to cracking, plus it really picked up those pesky fingerprints. Thankfully Google and LG (who are back on board to make the device) have addressed this issue, replacing the glass with a soft touch matte style coating, pretty much the same as the cover that graced the Nexus 7 earlier in the year.

Taking cues from the Nexus 7 again, the rear Nexus logo is now etched horizontally – this seems oddly strange for a device you'll almost always use in the portrait orientation.

In line with LG's other flagship, the G2, the bezels on the Nexus 5 are super slim, giving a real edge to edge feel and a more compact look.

You'll also be able to pick-up a white version, if that's your thing.

The Nexus 4 had a lovely, 4.7-inch 720p display, with a resolution of 1280 x 738 and a ppi of 320. Images were detailed and colours were surprisingly accurate. Plus it didn't feel quite as big as some other high-end devices.

This time around, Google has bumped the size up to 5-inches, increasing the ppi to 445 and the resolution to 1920x1080. This full HD, 1080p display puts it right up there with the big boys like the HTC One, Sony Xperia Z1 and Samsung Galaxy S4.

Corning Gorilla Glass 3, the Nexus 4 used the previous version, will also cover the display, ensuring you can safely stow away your keys and phone in the same pocket, without fear of scratches appearing.

Another area, another improvement for the Nexus 5, which now ships with a really quite powerful, top of the line 2.3GHz quad-core Qualcomm Snapdragon 800 processor. While the Snapdragron S4 Pro chip that graced the Nexus 4 was certainly no slouch, we're sure the improved power will make everything just that bit smoother.

RAM is the still the same at 2GB, though thankfully the 8GB storage option has been dropped in favour of 16GB and 32GB varieties. 8GB was almost useless, especially in these days of 1.5GB games, so it makes sense for Google to bid it farewell.

On the whole the Google Nexus 4 was a stellar device, all apart from one area - the camera. Snaps taken were most often than not blurry and terribly oversaturated. Even though the shooter was touted as being 8mp, we barely every used it. Here's hoping that the new rear facing camera, which again sports an 8mp sensor, with optical image stabilisation, produces much better snaps.

We've known the next version of Android was going to be called Kit Kat for a while now, and Kit Kat has not been shy about touting the fact they are on-board.

While Android 4.4 Kit Kat will be available on the Nexus 4, it will come pre-loaded on the Nexus 5. So what's changed? Let's take a look.

First change is that Google Now is much closer at hand; a simple left swipe from your home screen brings you into the interface and lets you check on everything from train times to the current weather. You'll also be able to say 'Ok, Google Now' to get things started, even when the screen is locked. However, this is a Nexus 5 only feature.

The camera software has been improved as well, adding in a new HDR+ setting, which snaps in a burst mode and then combines the shots to find the best overall image.

Google has tweaked the Android design a bit as well, adding in a translucent menu and on-screen button bar. This should make it look that bit bigger, and more fluid. A new dialer is also present, along with deeper search integration.

Where once stood a stand alone Messages app, now sits Google Hangouts, which finally works with your SMS and MMS messages, combining them with your chats and video calls. Again, this is a nice addition that creates more consistency within the operating system.

Possibly the biggest and definitely most long term change to Android is its ability to work with lower range handsets, even those that only have 512MB of RAM. It should also play nice with wearables – watches, we're looking at you.

We managed to, just about, get through a full days usage on the Nexus 4, though it was always a tight squeeze as the day grew older. We'll have to put the 2300mAh battery through its pace when we conduct our full review, so keep it locked to T3, to see how it fares.

It is official, the Nexus 5 supports LTE. That's a sigh of relief. You'll now be able to buy an off-contract Nexus 5 for a very reasonable £299 and stick in an LTE sim, from the likes of EE. O2 or Vodafone, to get super-fast web.

Wireless charging is back, along with an updated charger, plus there's the usual array of Wi-Fi, Bluetooth and NFC.

Google has managed to improve almost every aspect of the Nexus 5 over its predecessor, in specs at least; the screen is higher-res, the processor faster and storage larger. It looks nicer as well, with slim bezels and a matte back. Android 4.4 Kit Kat seems like another menial update, which only adds a handful of features, but then again, Android is a great operating as it is. Keep it locked to T3 for a full review soon.