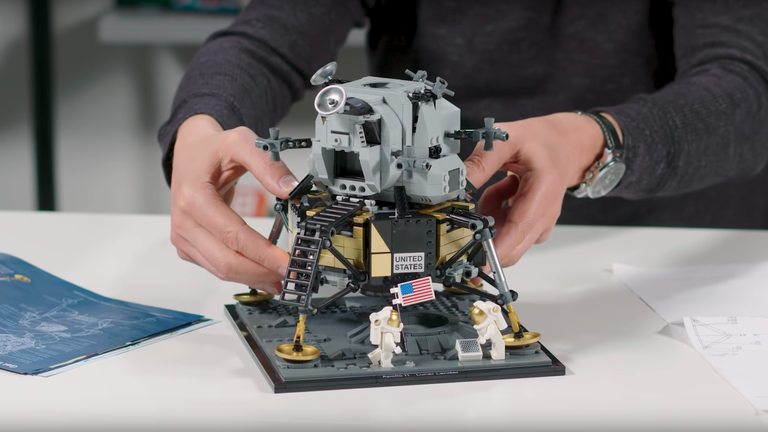 The Lego Apollo 11 Lunar Lander and Apollo 11 Saturn V rocket might cover some of the same ground (or, er, Moon dust), but they're different beasts in terms of size, so you can choose which best suits the space you have… or, as I genuinely did, just get both and leave Future You to worry about shelf space.

Lego worked with NASA on getting both of these just right, from the details to the exact colours, and you can tell all the love that's gone into designing them.

A 1:110-scale model that breaks into stages and has extra vehicles

Fully built, this thing is over a metre long. 100 actual cm. It's a genuine stunner, and is made to be a true show-piece – it doesn't even ask you to fiddle about with stickers to get the writing and flags on the side in the right place, instead printing all that stuff right on the bricks so that it'll be perfect.

The rocket comes apart into the multiple stages of the real rocket, or click together into one whole. There are scale versions of the lunar lander module and the command module, both in little dioramas (and the lunar module fits into a space in the rocket body too).

And it even comes with microfigure (about the size of a normal Lego minifigure's leg) astronauts, which are to scale with the whole thing. Plus stands to display it on in all its glory.

The Eagle has landed in beautiful block form

Added to Lego's line-up this year, especially for the anniversary, the Lunar Lander set is a much more manageable size than the rocket, coming in at 7 inches by 8 inches by 7 inches when built.

It's a thoughtful recreation of the complete landing module, include separate descent and ascent stage that come apart, both of which are carefully detailed, from the specific gold colour of the lower panels, to the realistic instrumentation inside the top stage, which opens up so you can put the two astronauts inside.

And it has a cratered Moon surface, of course, with name plate for where it's displayed. This is clearly crafted as a piece of memorabilia rather than a playset.