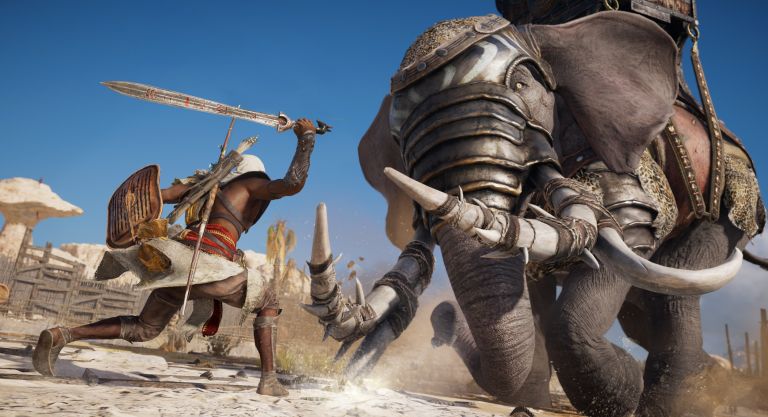 One wants to try new things - hitbox-based combat! collectible gear! camel races! - while the other steadfastly grips the tropes you’ve experienced in every other AC title (and they very much are tropes now we’re 11 or more games and ten years into the series).

You’ll parkour over scenery and climb incredibly detailed monuments; you’ll blow sleep darts and sneak through conveniently placed long gross; you’ll leap from ever implausible heights into even more conveniently placed stacks of hay. It’s undoubtedly derivative of itself in those moments, but when it embraces new ideas you get to enjoy an AC game that takes its core principles forward rather than relying on a completely foreign mechanic, such as Black Flag’s naval warfare, to make that progress for it.

With the same team that brought Black Flag’s golden age of piracy to life, and a four year development cycle (thanks to that much needed year off in 2016), Origins ends up offering a playground that seemingly never ceases to exude personality. The decision to set the game in Ancient Egypt - more specifically the reign of Ptolemy XIII, where the pyramids have become crumbling symbols of a bygone era - is the first stroke of brilliance.

Ankh you very much

By sticking its memory-exploring conceit into this closing chapter of Egypt’s era of power, we’re treated to a snapshot of this nation as it was (tombs, monuments and temples erected to fading gods and kings) and the future it’s soon to embrace (one where powers such as the Roman Empire already encroach upon the golden dunes). It’s a setting rich in history, and Ubisoft Montreal embraces it at every turn.

The series has always revelled in the ability to recreate period settings in digital form, but few others are awash with as much cultural detail. Everything from simple papyrus scripts to the decorations in hidden tombs reveal meticulously researched references to actual historical events and figures. The fact the game will be getting a non-violent education mode is testament to just how well mediums such as ours can present history in new and exciting ways.

With Bayek, we also get a main character who’s as intriguing as the world he inhabits. The game does stray dangerously close to narrative pitfalls it’s covered one too many times before (because, of course, nothing drives a man to ‘get sh*t done’ better than a heavy dose of personal tragedy), but the story manages to pull itself from the brink, weaving a plot that offers heartfelt moments of reflection to balance out all that bloodlust and violent death.

As a Medjay - a personal guardian to the pharaoh - Bayek stands out among AC’s pantheon of colourful assassin’s with little flourishes of characters we know mixed in with a personality ideally suited to the era. He’s cheeky like Arno, as driven as Connor and as steadfastly loyal to family as Ezio. Alongside a very strong set of supporting characters - including wife Aya, a brilliant character who could just as easily had a game all to herself - Origins doesn’t feel like it’s simply relying on abridged versions of famous figures to pad out its iMDB page.

Combat has been given a much needed overhaul. Gone are the simple attack patterns where parrying was the be all and end all of clashing swords. Now you’re treated to a system more akin to The Witcher or Dark Souls, where locking onto an enemy and striking with both light and heavy attacks is the order of the day. It certainly lacks the precision of The Witcher III’s action, but the added dimension of using space to dodge and counter your enemy (while building adrenaline to unleash vicious special attacks) does wonders for combat.

The only real concession is stealth. The core concept the series was once built upon (and briefly returned to with 2014's painfully underrated Unity) no longer feels essential. Quieter approaches are almost almost available, but the emphasis on weapon acquisition is so closely tied to melee and ranged combat it's hard to trade testing out that rad new machete you just picked up for a sneak in the long grass.

It also feeds into the new weapon and gear system that won’t be new to anyone who’s played an RPG in the last five years. Weapons are armour have levels and can be collected, scrapped and bought like loot. It’s a structure, while totally innocuous elsewhere, works in the tight vacuum of Origins.

Much like the returning XP metre for Bayek himself, it’s a system that naturally drives you to explore further afield, while rewarding you with shiny new bows, swords and maces. There’s also a real creativity to the designs, setups and buffs this weapons offer. Just wait until you find a sword and dagger combo. It’s /the/ best.

It should be mentioned here that Origins does include an online store. The subject of microtransactions has tumultuously resurfaced as of late with the likes of Middle-earth: Shadow of War and Star Wars Battlefront II and their respective loot box fiascos.

And while it’s no great shock to see Ubisoft once again including them, there’s no sense the game’s natural release of content is curtailed by an invisible pay wall. Unless you’re determined to unlock skills faster or speed up XP accumulation, you’re far better off exploring and finding fun new places and weapons than coughing up dough for them.

That’s because there’s just so much to discover. Not since the days of Black Flag’s teeming open ocean have we been treated to such a vast realm of involved content. Tombs - something the rebooted Tomb Raider still hasn’t quite mastered - stand out proudly, buried deep underground, filled with gold, puzzles and deadly traps. Layered with incidental details, they’re as much an ode to the rich historical tapestry the game draws so deeply from as they are a love letter to the memorable dungeons you explored back in AC Brotherhood.

Even side-quests, which a) often felt narratively hollow and b) relied too heavily on painfully repetitive templates in past titles feel rejuvenated. There are so many stories to explore I’m still nowhere near completing them all and I’m deep into Origins’ post-game at this stage, but that’s the beauty of it.

Just like everything else, those smaller missions drive me further out into the dunes, exploring an open-world that balances the fatigued elements you know with the fresh ones you can’t wait to familiarise yourself with. It’s a feedback loop that rewards you where so many other sandboxes - including many of AC’s own - felt weak beyond the main story.

Oh, and the score. That /score/! Sarah Schachner’s soundtrack is one of the most accomplished pieces of music in the series, offering flourishes of darkness, whimsy and violent theatre all in the same tracklisting. Not since the days of Jesper Kyd’s scores for the Ezio years has a soundtrack so quickly won me over.

What we end up with is a game that’s tangibly familiar, but one that takes the barebones confines of its Ubisoft DNA and expands and innovates in all the right places. Sitting somewhere between a soft reboot and a confident reinvention, Assassin’s Creed Origins proves what’s old can feel new again with the right setting, a creative approach to storytelling and more weapon variations than a gun rack in The Matrix.