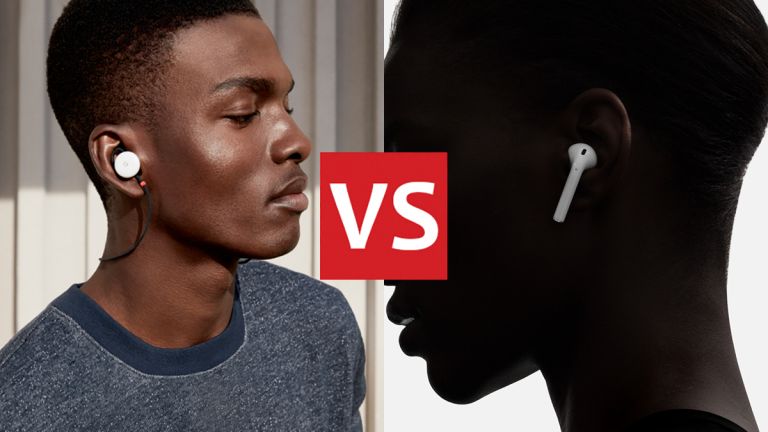 As you might have noticed, both Apple and Google sell premium, stylishly designed earphones, which work wirelessly and are intended to be paired with their respective flagship smartphones: we present to you the Apple AirPods and the Google Pixel Buds.

If you're picking up a pair of these earphones or you're wondering whether Apple or Google comes out on top in this particular product battle, we're here to help – we're going to put the AirPods and the Pixel Buds head to head against each other right here right now.

The AirPods have been around for a couple of years now and have become a familiar sight in that time – though they still look a little odd, dangling from people's ears, but they've undoubtedly been a success for Apple. The design is compact and understated, and the charging box is a very smart idea, tastefully executed.

Google's Pixel Buds are by no means ugly, but we don't think they quite match the elegance of the AirPods. Unlike the AirPods though, they are available in two colours: black or white. They also come with an adjustable connecting cord to keep them together and to keep them in your eyes.

Again, there's a little charging case with the Pixel Buds, as there is with the AirPods from Apple. It does the job well enough but it's not quite as elegantly designed as the case that comes with the AirPods. Overall we'd say these are two very well designed products you won't be embarrassed to show off, even if the Apple AirPods just edge it.

Earphones like this don't offer too much in the way of specifications, so you can't say one is faster or more powerful than the other. Both the Apple AirPods and the Google Pixel Buds work wirelessly over Bluetooth, so will work with either Android or iOS phones – though the AirPods are designed to work best with iPhones and the Pixel Buds are designed to work best with Pixel handsets (in terms of the speed of the syncing and the features available).

Both Apple and Google quote a battery life of five hours between charges, and 24 hours with the help of the battery pack, so they're difficult to split there too. The Pixel Buds are a little heavier though – each one tips the scales at 7 grams (0.25 ounces), while each AirPod weighs just 4 grams (0.14 ounces).

You're unlikely to notice the difference though, and the same goes for the music too. Both the Apple Airpods and the Google Pixel Buds deliver a fine-sounding audio experience, though outside sound will leak in (which is probably for the best if you're listening on a commute or on busy streets. Both come with an integrated microphone so you can make and take calls with the devices.

We really like the way the AirPods pair with an iPhone instantly, and pause the music automatically when you take them out of your ears. The Pixel Buds can't match that sort of smooth functionality – you need to tap the earphones to start and stop playback, and it doesn't always work as it should.

Neither the AirPods or the Pixel Buds are waterproof, so don't drop them in the sink, and they're both available at a very similar price point (check the widgets on this page for the latest deals). They're both getting a little dated now – the AirPods are more than two years old, the Pixel Buds more than a year old – and might be getting replaced soon.

The easy conclusion to jump to is that the AirPods are suitable if you own an iPhone, whereas the Pixel Buds are the better choice if you're currently using an Android phone – and considering the earphones are so well matched in other categories, we'd say that summary is pretty much spot on.

There aren't any compelling reasons to go for AirPods for Android users, or for iPhone owners to pick up some Pixel Buds. Certainly the audio quality isn't outstanding enough on either for them to appeal to serious audiophiles – though for most people it's perfectly fine to listen to, whether you're dealing with podcasts or music playlists.

You can of course stick with wired headphones for whatever smartphone you have, but the AirPods and Pixel Buds bring some neat tricks – like digital assistant support and music playback control – that make them worth investigating. Overall we slightly prefer the AirPods, for their design and ease of use, but there isn't much in it.