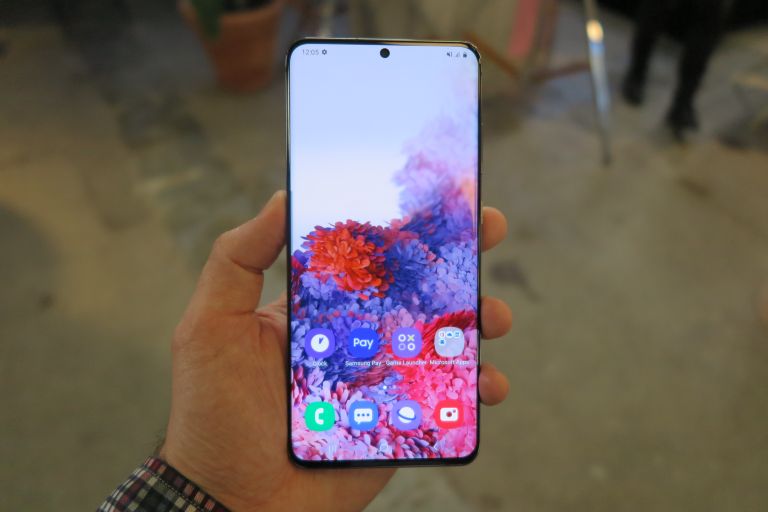 Welcome to T3's hands on Samsung Galaxy S20 Ultra review. Recently T3 went hands on with the top device in Samsung's new Galaxy S20 range of handsets, and what follows is our early verdict take.

We've split this early verdict Samsung Galaxy S20 Ultra review into a selection of easy to digest categories, including its price and release date, design and screen, and hardware and camera, so you can quickly get a solid overview of the phone.

The Samsung Galaxy S20 Ultra pre-order date is 11th of February, 2020. This is the date when pre-orders for the phone will open, with the pre-order period then stretching through to March 8th. Customers who pre-order the Ultra during this period will received a free pair of Samsung Galaxy Buds+ true wireless earphones for free, and will also receive their phone a few days early.

The Samsung Galaxy S20 release date is 13th of March, 2020. As noted above, pre-order customers will get their handsets a few days in advance of this on sale date.

Pick up the Samsung Galaxy S20 Ultra and the first thing that you can't help but notice is how large its screen is. At 6.9 inches, it is a match for even the gargantuan Samsung Galaxy Note 10+, which comes with a 6.8-inch screen. Side-by-side these two phones look essentially the same in terms of size, however when you pick them up there is a noticeable weight difference, with the Ultra feeling heavier (221g) and denser than the king-sized Note (196g).

In terms of design, though, we're very much in the same ballpark. The main visual difference, at least from the front, is that the Galaxy S20 Ultra has more S-series wider frame curves, giving it a slightly softer look.

Similarities to the Note 10+, which this phone is closer to in our opinion than last year's range topping Samsung Galaxy S10 5G, continue in the placement of the front-facing camera, which sits smack bang top-centre. It is the same pin-hole design and, until we get underscreen camera tech, is the best alternative if you aren't into motorised pop-ups.

Sticking round the front of the device, you cannot but be impressed by the size and clarity of the Dynamic AMOLED display. This screen has a refresh rate of 120Hz, which even outguns the gorgeousness of the OnePlus 7T and OnePlus 7T Pro panels, which are 90Hz, and that along with HDR10+ and a sharp 1,440 x 3,200 resolution means that anything you display on this display looks absolutely stunning.

That 120Hz refresh rate means that scrolling, app switching, UI navigating and all animated elements are all liquid-butter smooth, and in partnership with the slickness of Android 10.0 and Samsung's best-in-class One UI 2 skin it truly delivers a top-tier general usage experience.

In terms of button placement, the entire left hand edge of the Ultra's frame is untouched, with its volume rocker and power button riding the right hand edge. As you would expect, the phone's USB 3.1 Type C power port is located on the bottom edge, while its SIM and microSD card slot is located on the top edge.

Flip the phone over, and the only design element of note is the phone's pronounced rectangular camera array, which we will talk about right now in the next section.

Samsung, like Google has done with the Pixel 4, Apple has done with the iPhone 11, and Huawei did with the Huawei Mate 20 Pro, speaks about its rear camera array as a "signature design element" — something that helps make the phone's overall look and allows it to be easily identified. And, when you flip the phone over, the one thing it does is standout.

The pronounced rectangular array (which will have to be protected by a case to avoid scrapes and nics in our opinion) house a seriously powerful quad-camera system, with a 108MP wide-angle main snapper joined by a 48MP telephoto, 12MP ultra wide, and ToF DepthVision lenses.

T3 tested the zoom functionality as best we could in a closed environment, and it seemed strong, however we will reserve judgement on if it beats the Huawei P30 Pro's lossless zoom until we perform our proper review.

And, while we're talking about the rear array's selection of lenses, the S20 Ultra's new Single Take shooting mode makes use of them all. In this mode all the lenses are used when a shot or video is taken and then, post shot, the user is presented with a variety of differing options, which sit all under one entry in the phone's image gallery (see below image).

This means that, one, your gallery doesn't become overall cluttered and, two, it means you have various different versions of single event capture. We found this great on test as it largely removes moments of indecision when quickly choosing a mode in which to shoot, while helping you not miss the best angle.

In terms of internal hardware, as you would expect from the range-topping new hotness in a fresh Samsung phone line-up, the Galaxy S20 Ultra is absolutely stacked. The phone comes with Samsung's rapid Exynos 990 CPU (a Snapdragon 865 in the US), an Adreno 650 GPU, a simply incredible 16GB of RAM (in max-spec) and a chunky 512GB of internal storage space (which can be expanded by microSD).

Such a ginormous phone needs a large battery, too, and thankfully Samsung seems to have done good on this, as the S20 Ultra comes loaded with a 5,000mAh battery. Naturally, T3 could not test the longevity of this battery, but here's hoping we can see a day and a half to two days medium use on a single charge. The battery supports 45W fast charging.

Other tech of note included an underscreen fingerprint reader, 5G support (there is no just 4G version of the Ultra, with the one handset supporting all network connections up to and including 5G) and AKG-tuned stereo loud speakers.

In terms of operating system, the Samsung Galaxy S20 Ultra comes running Android 10 and Samsung's One UI 2, which runs like a dream on the hardware (as you would expect).

From our brief hands-on time with the Samsung Galaxy S20 Ultra it was easy to see that it is a very good phone and, providing your pockets are deep enough, will obviously deliver a quality experience.

How it scores, though, will largely come down to a couple of things we could not test properly during our hands on time with the phone, namely its 5G performance, camera system and battery life. Naturally, we will also be keen to see what sort of benchmark scores the phone delivers.

As such, be sure to check back in to T3 soon for our full Samsung Galaxy S20 Ultra review, as well as where to get the very best deals on it.