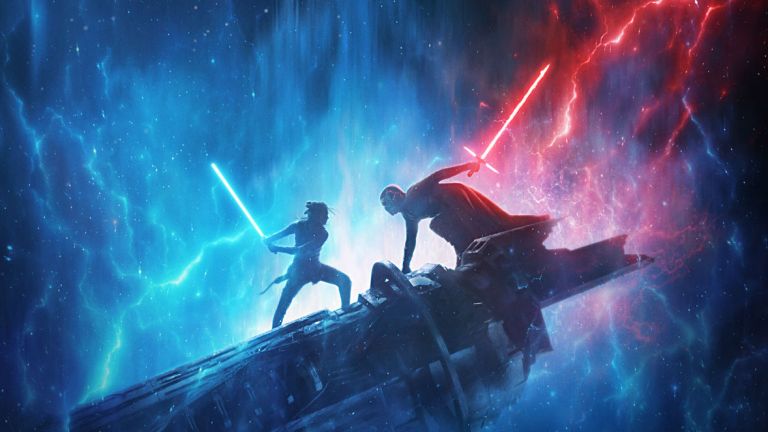 Star Wars: The Rise of Skywalker is out NOW and we're guessing that there's a damn good chance that its awesomeness will lead you to rewatch all of the previously released Star Wars films too.

Maybe, you'll even be introducing a younger viewer to the films for the first time before you head off to the cinema. However, before you reach for the box sets, it's worth remembering that due to numerous reasons - primarily George Lucas' bungling though - if you sit that uninitiated viewer down and show them the films in release order or, trying to be clever, episode order, they'll come away from the films either confused or just down-right unimpressed. Why? Read on.

*The original Machete Order was formulated before Star Wars: The Force Awakens, Star Wars: The Last Jedi, and Star Wars: The Rise of Skywalker were released. T3 has added these film in - however, it has no affect on the order. As Rogue One and Solo are more  spin-offs, and have zero bearing on the core story, they are not included.

If you find the lack of narrative cohesion in George Lucas' vision disturbing, then the Machete Order is for you.

Episode Order is the order in which George Lucas supposedly envisioned his grand narrative all along. So the order is: The Phantom Menace, Attack of the Clones, Revenge of the Sith, A New Hope, The Empire Strikes Back, Return of the Jedi, The Force Awakens, The Last Jedi and then The Rise of Skywalker.

Surely though nothing can go wrong with this order though, right? After all, it's the order of the grand narrative that George meticulously planned out over decades. Wrong! George Lucas had no grand narrative other than that which involved dump truck loads of dosh being driven up to his ranch. In fact, there are two absolutely critical flaws with watching the films in this order - especially so if you are watching the films for the first time.

The Machete Order, rather than Anakin Skywalker, will help bring balance to the Star Wars saga.

Firstly - and this is a real doozy of flaw - by watching the films in Episode Order the dramatic surprise revelation that Darth Vader is Luke Skywalker's father is completely and utterly ruined. One of the most memorable scenes in the entirety of movie history ruined. Why? Well far from only getting small hints that Luke's father is Vader, which is what you get if you just watch A New Hope and The Empire Strikes Back, the prequel trilogy completely spunks away the revelation, ramming it down your throat with an appalling Anakin-being-turned-into-Vader transition scene at the end of Revenge of the Sith. As such, by the time a new viewer comes round to watching Empire, the dramatic scene's surprise is not only ruined, but the emotional impact rendered null and void.

'Nooooooooo!' That's what audiences shouted when they first saw this appalling scene in Revenge of the Sith

If that wasn't bad enough, Episode Order also makes very little sense from a narrative point of view. All three of the prequel films are essentially background material for the original trilogy's narrative and, as George decided to clumsily shift narrative focus between the two trilogies from Luke to Anakin/Vader, it doesn't even do that job well, spending hours focussing on the latter's motives for turning evil in one of the most boring character development arcs of all time. It completely disjoints the saga's narrative fundamentally, leaving new viewers bored to death, confused or both.

Release Order is no better

Ok, so George's cash grab led to a balls up in terms of the Star Wars narrative, with the retrospective re-numbering of the films leading to major viewing issues, but how about going back to basics and watching the films in order of their cinematic release? Well, we're sorry to break this to you, but Lucas has f**ked that up too.

The problem comes from his slotting of Hayden Christensen into the scene at the end of Return of the Jedi, when Luke sees the ghosts of Obi-Wan, Yoda and Anakin. Before the prequels Anakin was portrayed by Sebastian Shaw, the old English actor who played Vader when his helmet is off. However, since George decided to remove Shaw and replace him with Christensen, when new viewers get to this scene they have no idea who the young man is and why he is standing there. This scene, therefore, instead of ending on a feel good redemptive note - as it was originally intended to do - instead ends in utter confusion.

If you watch in Release Order, this scene ruins one of the greatest revelations in movie history. Also, sex predator eyes!

So, how do you solve these three experience-ruining issues for the viewer? Simple, you watch the films in this order: A New Hope, The Empire Strikes Back, Attack of the Clones, Revenge of the Sith, Return of the Jedi and then The Force Awakens. Yes, you read the list right, Episode I: The Phantom Menace is not included.

The Machete Order sandwiches Episode II and III between The Empire Strikes Back and Return of the Jedi.

By watching the films in this order, you not only avoid spoilers entirely, but also maintain the original narrative's focus. Essentially you follow Luke on his coming of age story up until he loses his hand to Vader on Cloud City and finds out that he is his father, before going on an extended two-film flashback where we see how Anakin became Vader and conceived Luke, before then snapping back to the present for the finale. The father reveal is preserved, the Luke narrative is preserved and the ghost-tastic, feel-good, redemption finale is preserved.

This fight is cool but the film it is contained within is entirely non-critical to the grand narrative of the Star Wars saga.

But, you may say, how do we get the whole story without Episode I? Surely, it has an effect on the narrative? Nope, nope and nope. Episode I is completely superfluous to the story and all the narrative strands it raises are essentially concluded within the same film. For example, Darth Maul has no bearing outside the film on the story and is replaced immediately with Count Dooku. Equally, Qui-Gon Jinn's actions have no bearing outside the film and he may as well not have existed. Everything Anakin does in the film as a boy is irrelevant to the wider plot. All characters who pass over to Episode II are also re-introduced along with their motives. The list goes on. The brutal fact is that Episode I is just not needed and, when you've got Jar Jar Binks devouring your soul in every other scene, it is just not worth it.

By cutting Episode I from the running order, you cut the vast majority of Jar Jar. Who wouldn't want that?!

In addition to solving these issues, the Machete Order also enhances some other aspects of the films. Firstly, by dropping baby Anakin, the parallels between Luke and Anakin's development arcs are made far more one-for-one. Secondly, it makes Yoda's regretful warning to Luke to beware the power of the Emperor in Return of the Jedi more poignant, as you have just watched him fail to defeat Palpatine in Revenge of the Sith. And thirdly, it makes Luke's actions in Return of the Jedi, when he uses Force Grip on Jabba the Hutt's guards and then warns Jabba 'not to underestimate my power', more ominous as you've seen Vader use Force Grip in A New Hope and you've just seen Anakin warning Obi-Wan that 'You underestimate my power!' and choking Padme at the end of Revenge of the Sith.

Luke's utilisation of Force Grip in Return of the Jedi becomes more noticable in the Machete Order, highlighting his internal battle.

While it's not perfect it's the way forward

While the Machete Order arguably fixes Lucas' biggest cock-ups, it isn't perfect. As you've missed Episode I a few minor things in II and III come slightly out of the blue, such as the reveal that Anakin's mother is a captive slave on Tatooine (remember, we've had none of that badly acted backstory from Phantom), as well as all the prophecy stuff about a person that will 'bring balance to the Force'.

This scene where Anakin returns to Tatooine to save his captive mother comes out of the blue in the Machete Order.

Overall though, from what we can see here at T3 Towers, if you want to include the prequels in your viewing experience then this is as good a way to do it as any, especially if you have a new watcher in your group. In addition, as the original Machete Order ends with Return of the Jedi it also works with Star Wars: The Force Awakens and Star Wars: The Last Jedi.

Big hat tip to Rod Hilton, the original creator of the Machete Order.