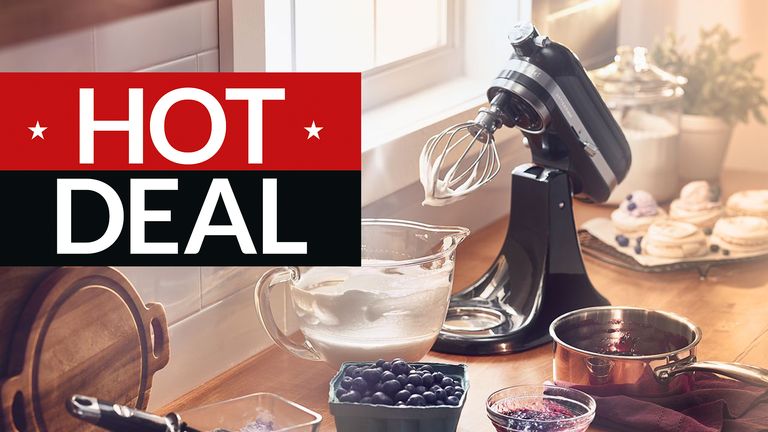 Looking for the best January sales deal on a KitchenAid stand mixer? January may be on its way out, but this deal – which started on Boxing Day – is still going strong. Any baker worth their salt (and icing sugar) needs a mixer like this. Fast, quiet, and easy-to-clean, the KitchenAid Artisan is a bona-fide modern classic and will enhance the look of any kitchen it resides in. Unusually, Lakeland's deals include the most desirable KitchenAid stand mixers, not just the weird-looking ones or the ones that are pink with stars on.

Long-term watchers of KitchenAid stand mixer deals will be well aware that the £200 discount is pretty standard when these things are on sale, but on the other hand… that's a huge £200 off the most sought-after kitchen gadget there is.

• That includes the classic 4.8-litre KitchenAid Artisan 125 in red

The 185 comes with a choice of two bowls and a better K beater, which scrapes goo off the side of said bowls as it goes. This one is a in a fetching crimson hue – that's a darker red than the classic KitchenAid Empire red.

With a 4.8L stainless steel bowl and a variety of attachments, the KitchenAid artisan can handle anything a modern kitchen can throw at it. The wire whisk is perfect for cakes, the dough hook will makes manual bread dough needing a thing of the past, while the flat beater will beat cream and eggs in moments.

Why you should buy a KitchenAid Artisan stand mixer

The KitchenAid 125 and 156 Artisan 4.8L Stand Mixers provide performance and practicality in equal measure. Expect plenty of power for taking on the likes of mega cake mixes and dough too thanks to the selection of supplied mixing accessories and a 300W motor.

You'll need to pay extra for mincers, spiralisers and whatnot, but included in the box – alongside a sizeable, 4.8-litre capacity bowl, with a pouring shield that helps keep mess levels to a minimum – are a wire whisk, a flat beater and a dough hook that’ll tame anything you’ve got in mind, bread-wise.

Once you’re underway the KitchenAid 125 and 156 have a dry working capacity that can handle 1kg of flour, a whopping 2.7kg of cake mix or mash 3.2kg of, er, potatoes – because we know these stand mixers are just as popular with spud lovers as they are with cake-heads. Ahem.

Liquids-wise, the KitchenAid Artisan can work with 1-litre of something like whipped cream if that’s your thing.

What we also like about the KitchenAid Artisan stand mixer is its footprint, in that it’s big enough for people not to miss it in your kitchen, but doesn’t get in the way on your worktop. Just right, we reckon…

Want some more advice on which KitchenAid mixer is right for you? To be fair, with all the models KitchenAid has, it is bloody confusing. Head on over to our Best KitchenAid mixers guide and all will become clear.