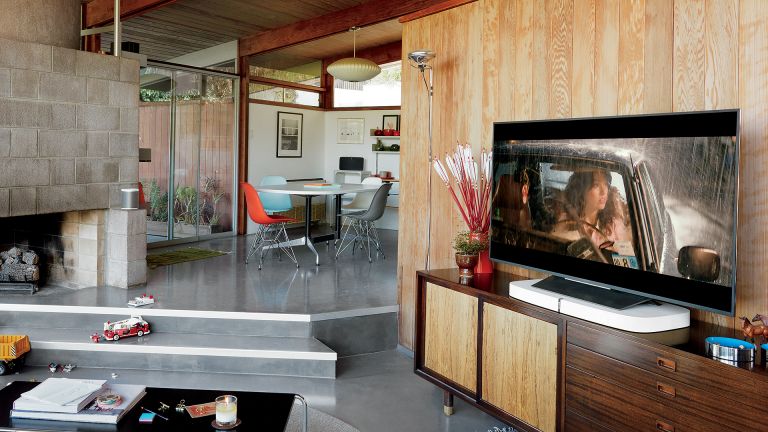 The best soundbars and the best soundbases let you improve a rather sorry scenario with television audio. Y'see, one unfortunate side effect of 4K TVs now being about the thickness of a pencil is that they can often feel a bit short of volume, with dialogue being hard to pick out, and music tinny and, as musicologists would put it, 'shite'.

You could, of course, get an AV receiver and surround sound speakers, but will your other half really like that? Is your front room even suitable? The answers to those questions may well be, 'no way, José'. Enter the soundbar and, more recently, the sound base.

What is the best soundbar or soundbase?

We have selected seven bars 'n' bases that all sound great, but cover different listeners for different needs.

To that end, there are 'best for' bars for everything from surround sound to style to music.

Best soundbar overall, thanks to its huge range of features, allied to excellent audio, is the Sonos Beam. It's now been crowned Best Soundbar at the T3 Awards, 2 years running!

Best bar pound for pound is the Q Acoustics M3, which is the successor to the M4, logically enough. It is a great performer with both movies and music, allows for Bluetooth streaming from your phone, and looks suitably chic, all for a reasonable, sub-£300 price.

How to buy the best soundbar

As televisions get slimmer they may look more attractive, but the audio quality is thin, too. A soundbar puts back some power and bass without the intrusive cables and clutter of a home cinema system.

First thing to bear in mind is they don't all supply surround sound – just as many soundbars deal only in stereo, so choose accordingly. Stereo is more reliable, surround sound can be magical. Or it can be a mess.

Some have subwoofers built-in to the main unit, while others include separate woofers, often 'wireless' (although of course, they aren't, as they must be plugged into mains).

Many now also boast Bluetooth and/or Wi-Fi to stream music wirelessly from phones.

The main thing to bear in mind with soundbars is where to position them. If your TV is on a media unit, and you're planning to just plonk the soundbar in front of it, you may find it blocks your remote control.

For that reason, you might want to consider a sound base as they sit right under the TV, acting as a mini stand. This means they can't block the remote's IR connection but it also makes them less suitable if you've got your TV wall mounted, or sat on a standard TV stand.

Another key thing to look out for is the number and type of wired connections on offer. HDMI isn't perfect but it is the easiest way to plug and play, yet some bars and bases don't include it, using optical digital instead.

Also handy: if you plug your bar or base into your TV's ARC HDMI, you can then handle key controls from your TV's remote, which means you can afford to lose the soundbar's remote control. Which you probably will anyway, let's face it.

The best soundbars and soundbases to buy, in order

-Can get expensive rapidly if you embark upon said upgrades

Arguably worth the price even if it was just a soundbar, Sonos Beam adds so many useful additional features that it becomes almost a no-brainer to at least consider a purchase. One day, all wireless home cinema speakers will be this versatile, this good…

There are bigger-sounding soundbars, sexier ones and fuller-featured ones but the M3 offers absolute simplicity and great sound with both music and movies.

Just plug in via HDMI (there's also aptX Bluetooth, a 3.5mm and optical connection for additional sources) and, well, that's it.

For all their supposed simplicity, all the other bars and bases here offered at least a certain amount of pain in the ass, but this one really was straightforward.

As with any bar, you can place this in front of your TV, under it in a media unit or wall mounted below it. Unlike most soundbars, the M3 even has a switch to optimise audio for each position although, if I'm being honest, it's hard to say it made much difference.

The really great thing about the M3 is that it nails all three of the things you want a soundbar to do. It provides a volume and clarity boost to TV, gives an exciting and powerful leg-up to movies, with effects and music widescreened, without losing dialogue, and it also delivers exceptional clout with musical sources.

Subtle it perhaps isn't, but Led Zeppelin's live DVD really does feel like an army of berzerkers coming at you with the M3 whacked up.

Interestingly, the older M4 is still available for about the same price and is highly rated by audiophiles, but it's a lot uglier, lacks HDMI and audiophiles largely dislike it because it is 'too bassy', which is an oxymoron.

This by far the most beautiful item on this page. Yes it's more than twice the price of the Q Acoustics but, you get what you pay for.

This soundbase sits under your telly looking handsome but it can also put out anything from a subtle and nuanced performance to a veritable tsunami of sound through its umpteen drivers. It also does a decent job of making Poldark's 'actors' audible.

Being a Sonos gizmo the Playbase is compatible with its other, multi-room speakers, and can also use them as rear surround and centre, dialogue speakers. It's excellent as a music speaker.

Setup is a bit of a pain as you have to roam the room waving your phone around to 'tune' it, and even after you've done all that, the sound stage is not as wide as you'd expect. Sonos' app remains constantly teetering on the brink of being annoying, too.

That is quibbling though, really. The Playbase is an excellent audio/lifestyle product.

If you're in love with Sonos multiroom, the Playbar is your other route to adding it to your home entertainment system. It works in exactly the same way as the Playbase but the sound is less meaty and aggressive in our opinion.

-It's not 'true' over-head Atmos, of course

The HT-ST5000 is more premium than Sonos' soundbars and handles more channels too, with Dolby Atmos and a simulation, at least, of 7.1.2 surround sound.

Build quality is exceptional. While there’s a fabric cover to complement the hairline finish, we suggest you remove it and just drink in those drivers. Mmm-mm.

Left and right are two gorgeous coaxial speakers with gold-rimmed high frequency tweeters, while a step-down coaxial flanked by mid-range quartet sits dead centre. On top are up-firing Dolby-enabled speakers for Dolby Atmos and height duties. Sony describes all this as a 7.1.2 proposition.

It punches hard too. The sub drops to 31.5Hz, and is more than able to pulverize your popcorn. With a claimed power output of 800W, the system suits all musical genres too, supporting a full fist of Hi-Res Audio codecs up to DSD.

A pearl amongst soundbars.

-Not cheap-Not really a 'one-box' solution

An even more serious proposition, this loses points for really being a 3.1 system rather than a true one-box soundbar.

However, it then regains those points and more by providing an astounding Dolby Atmos experience from one (large, cardboard) box (with four speakers in it).

The largest portion of the package, the soundbar sits in front of or under your telly as usual, while two small speakers fire forwards and upwards to deliver Atmos effects, and a subwoofer provides the bottom end.

Admittedly there's not a lot of Atmos ready for home listening, but Samsung's setup will also have a stab at 'upscaling' standard surround audio to 5.1.4, if you wish.

Add Bluetooth, Wi-fi streaming and multi-room, with compatible Samsung speakers, and you have a system that, while a lot more space-demanding than its rivals, undeniably gives a lot in return.

It’s virtually impossible to get even vaguely convincing surround from a soundbar for less than £500, which is why if you're in that price bracket, you're better off sticking with good ol' stereo.

Yamaha’s YAS-306, however, comes eerily close. It not only looks designer friendly, with a silver fabric finish (black is also available), but it also curves audio around your lobes with its Air Surround Xtreme virtual surround mode, which creates a convincingly cinematic soundstage from a modest dual tweeter/woofer array.

It is rather light on bass – despite dual 7.5cm integrated subwoofers, it offers very little below 100Hz, which strips slam from action movies and neuters drum and bass. The other thing that betrays its super-affordable price is that optical digital is the main hook-up to your TV; there’s no HDMI ARC. Even so, a great deal.

Virtual surround soundbar that can be upgraded with rear surround speakers

+Attractive styling+Easy to upgrade to 5.1

-Gets expensive if you do so

The Soundtouch 300 is a good-looking machine that's easy to setup via HDMI ARC although, I have heard it said, much less so over optical audio.

It's also fully featured, with Wi-Fi and Bluetooth audio streaming, and the sonic performance is seldom less than impressive.

We'd take the bars and bases above it if that was where the Soundtouch 300's charms ended but add a Bose subwoofer and a pair of its tiny satellite speakers and you have very easy, true 5.1 surround, and that really sparkles.

Unfortunately, you will need to shell out a further 850 quid for that privilege (£250 for the rear surround satellites, £600 for the woofer).

The only other thing I didn't like is that setup involves strapping a microphone to your head and then moving around the room. I'd really rather keep some dignity while setting up a soundbar.

+Affordable and easy to setup

-We prefer the soundbar

This sounds very similar to the Q Acoustics M3. In fact, it's basically the M3 in a soundbase form. As such it perhaps has to work a bit harder to give as wide a stereo soundfield as its sibling, but on the other hand, it is easier to set up – you just lift your telly and plonk it underneath.

Unless you're short of space, we can't quite see why you'd get this over the M3, as it's considerably less sexy to look at. Nonetheless, it's a similarly excellent product in audio terms..