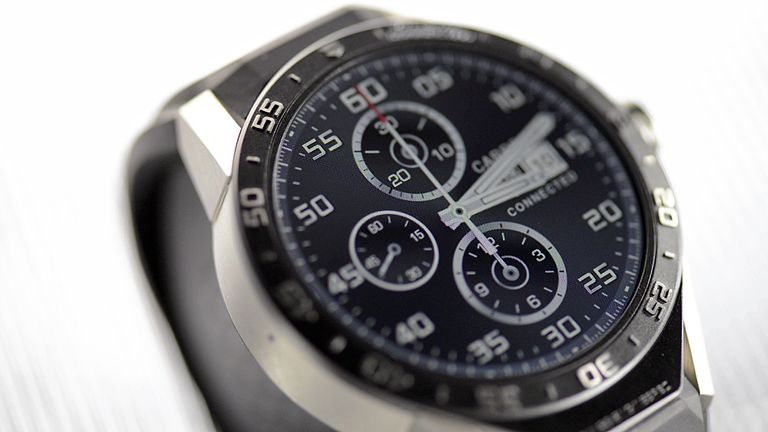 The Tag Heuer Connected is real, it's on sale in the US and the UK, and it's been doing rather well, with the watch brand announcing it was upping production from 1,500 units per week to 2,000. That's a big deal, considering it's somewhat of an experiment for Tag Heuer.

The launch was a flurry of cheese, eccentric Swiss, and stiff Americans, in many ways a carbon copy of the ker-razy original announcement of the Connected Watch, back at high-tone watch-fest Baselworld 2015.

The first thing you should know: this is a £1,100 smartwatch running Android Wear, and that's what it feels like, and that's what it is. In every way, tech-wise, it's all but identical to something like the Huawei Watch or Motorola Moto 360, but triple the price. If that very concept has you gasping in horror, this watch isn't for you.

The concessions Google has made to Tag Heuer are tiny: notifications do not sit at the bottom of the screen but must be pulled up, some of the icons are being described as 'less cartoon like', though I would debate that. Everything runs smoothly on the Tag's Intel Atom processor, but then Android Wear runs smoothly on all the current generation of smartwatches. It's a great little OS.

So what we have here is an Android Wear watch like any other, but in a better case, with a better strap. Well, that's my view, anyway. The headline stats: based on the Carrera Calibre design, it's got a 46mm sapphire crystal touchscreen, grade 2 titanium lugs, IP67 water resistance, and a textured rubber strap in a choice of seven colors.

Tech specs weren't amazing, because that isn't what this product is really about. It's got a custom Intel Atom Z34XX chip ('The smallest computer in the world!' as Tag's lunatic head honcho Jean-Claude Biver bellowed at the press conference), 1GB of RAM, 4GB of storage. The screen looks fine, but actually had a 360x360 (240ppi) resolution (decent enough, but that's far behind the likes of the Samsung Gear S and Apple Watch).

The case is titanium and feels rugged, tough, just a tiny bit rough ('textured', let's say) and the strap is thick, grippy rubber. The clasp is beautifully engineered, easily adjusted and closes with a satisfying feeling of finality. The back? That's made of plastic, but you can't have everything.

Android Wear is its usual blend of notifications, health checks, and more notifications. Google Now works really well to give you info tailored to your learned interests and location, and the voice control is that bit better than Siri, at least with my posh tones.

Is Android Wear a better OS than watchOS 2? I think it is, just because it pares back smartwatch functionality to the essentials and makes them work. In terms of app-powered versatility it's not a patch on watchOS 2, but do you really need all those bells and whistles on your wrist?

That button on the side awakens and brightens the screen or turns it off (with a double push). It doesn't do much else, unlike the Apple Watch crown or the Gear S2 bezel, leaving you to navigate with touch and voice.

Android Wear is sufficiently simple that the lack of a more sophisticated controller is not really an issue, especially if you are willing to talk to your watch. The only caveat here would be that although brand new Android Wear devices such as this one are now compatible with iOS devices, they lose so much functionality that the OS becomes even more simple, perhaps to the point of over-simplicity, in fact.

I think where Tag Heuer has nailed this is that this is totally a bloke's watch. It's metallic in a way that reminds you of engine parts and war machines, and though it is actually very light, it looks hefty. It's 46mm across. There is just no attempt to make anything unisex here, which, okay, rules out half the population buying it, but, on the other hand, doesn't leave you with something like the Apple Watch that's neither masculine nor feminine.

See, now that is a bloke's watch. It is let down by the still cartoony Google graphics there, but on one of the exclusive, Tag Heuer Carrera-derived watch faces, it looks about as good as I could imagine a smartwatch looking. Unlike previous Android Wear watches, the screen is always on by default, and flares up when you press the crown or raise your wrist - though it soon darkens to preserve battery life, which is described as 'all-day', but can be stretched to two days.

If I'm being honest, this review is a little pointless. Do you have £1,100 to spend on a smartwatch? No? Then move right along. You do? Then your choice is this…

Well, actually, the Apple Watch is £949, but that was as near as I could find.

I think it's obvious which of these two looks better. However, if you've got an iPhone, I'd always recommend an Apple Watch over an Android Wear one. So there's that.

The truth is, I don't think anyone other than TAG Heuer die-hards will buy this piece - and that's not a criticism as such, that may well be a big enough market to make it pretty successful, in lower-end luxury watch terms. There is one final twist that I think almost guarantees it, actually: the fact that, after three years, you can trade this for a mechanical Carrera, albeit for a further £1,100.

I assume that's going to be an absolute bottom-end Carrera, but it's still an answer to the question that has dogged Apple's foray into luxe: how do you make an heirloom of something that's obsolete within 5 years?

A great looking and feeling smartwatch that's way out of the price range of most casual tech buyers. For our money, it looks like a better stab at such a thing than Apple's more expensive Watches. But does Android Wear's efficient simplicity and cartoony look really sit well with such an expensive piece? That's the one bit we're not quite sold on, yet.