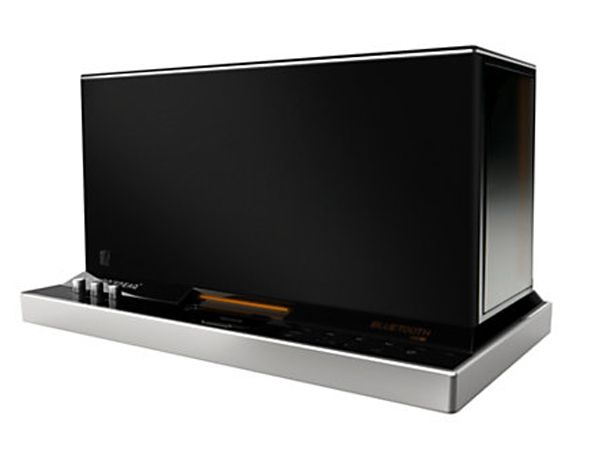 If you're looking for an iPod dock that looks slightly different SoundFreaq's designers have had fun with the retro styling of this mini monolithic iPod dock, and they've also crammed in the features. It's clever internal airflow system improves the bass, while inbuilt Bluetooth connectivity means you don't even have to dock your device to hear it.

It's a compact and lightweight unit, but it crams a lot of tech into the shiny platform-mounted box. The electro orange LED at the side actually indicates a compartment for the tiny remote control, while the three dials at the front are old fashioned tone controls – albeit digital ones that won't degrade your signal.

Inside, two front-firing drive units made from a custom iron and carbon blend face forwards, but their long air ports vent behind the cabinet to reinforce the bass frequencies. It means you get a richer and warmer sound than you might expect from such a small dock, even when the volume is set quite low.

It also features sound processing, called EQ3, that effectively boosts the signal to give a more dynamic and sound, which has the effect of making it sound much wider and louder, although it also introduces background hiss in the high frequencies at the same time.

The main problem is that this dock isn't built for big performances, so while it sounds nicely detailed at modest listening levels, distortion sets in when you crank it up. The treble begins to sound shrill and the cabinet vibrates slightly with the bass when running at full whack.

This dock is clearly built to a strict budget and the plastic construction doesn't help the sound's projection either. So close up listening with the dock on a side table is fine, but it struggles to fill a large space so convincingly.

What it does offer is convenience. Its handy Bluetooth technology means you can pair up your iPod, or iPad just by selecting Bluetooth on your device and holding down the 'pair' button for a few seconds and it'll stream at CD quality. There's very little audible compromise with the wireless connection in fact.

The overall design is very pleasing. It'll look great in your bedroom and the hideaway remote makes it easy to control from bed with the iPod itself acting as a bedside alarm clock. It sounds fine in this proximity too, but just don't ask it to provide the tunes at your house party as this delicate dock juts isn't built to be a PA system.

Find out more from SoundFreaq