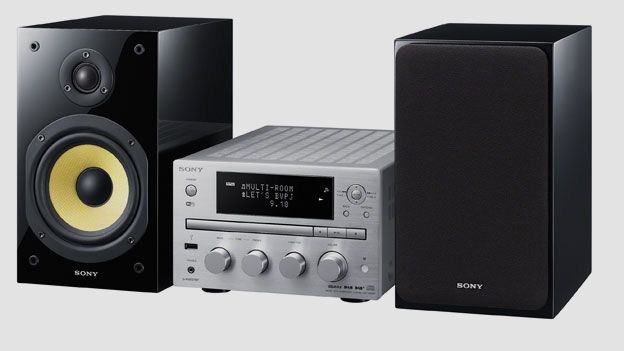 The Sony CMT-G2NiP is a micro hi-fi that rocks a CD player like it's 1998, but covers all the connectivity bases including Apple AirPlay support

In a world where iPod docks seem to reign supreme, is there still a place for a micro hi-fi in your life? Well, Sony still thinks so and its flagship system - the Sony CMT-G2BNiP - combines some pre-digital tech with the cutting-edge connectivity that should keep the modern age audiophile happy as well.

In a day and age where superior sound performance just isn't enough, the G2 delivers in the looks department with its glossy piano black speakers that look even better minus the grills to show off the meshy yellow tweeters.

There's also the aluminium base unit which hosts the four knob controls, CD loading tray, tune buttons and 3 line digital display which is just about big enough to navigate around the different feature modes.

Setting up does take a few minutes as you spend most of that time unscrewing the speaker ports to thread wires through the back of the base unit and the speakers, but once that is out the way, setting up your home network is a relatively easily process.

There's no sign of an iPod dock, but Apple fanboys need not panic as Sony has added USB support so you can plug your white Apple lead in to blare out your iTunes playlists.

Sony told T3 that it opted against integrating an iPod dock claiming that it would affect the overall audio performance. We also noticed that it gets slightly warm on the top of the base unit which may also have something to do with that decision.

There's Wi-Fi and support for DLNA certified devices to stream from storage servers like a PC and Mac and taking a leaf out of Sonos's book the Party Streaming function means you can send the same music to multiple Sony devices scattered around your house.

As well as a remote control, there's a free Sony AudioRemote iPhone app which enables you to control the music set up over Wi-Fi and lets you choose which device to send the music to. It's not the most intuitive app, but in terms of its usefulness if you don't use AirPlay, it's a nice addition to the setup.

For the analogue music lovers, there's a FM/AM tuner but with DAB and DAB+ delivering clearer sound for all your favourite digital radio stations.

Once connected to your home network, detection of an AirPlay supported device takes a few seconds before syncing. We tested out streaming music from iTunes and using the Spotify iOS app for the iPhone and iPod Touch we were able to seamlessly switch between devices and see track/artist and song duration information displayed on the digital display.

We did notice that when returning to use the AirPlay mode it did take slightly longer to lock back onto the Wi-Fi connection before we could start using it again.

The G2 delivers a rich, suprisingly powerful sound with knobs to adjust bass and treble to tailor to different types of music. Bass is punchy but does not detract from the clarity which helps to deliver a more refined performance making it ideal for more instrument-based music.

It pumps out 100W of power, but if you play around with the positioning of the speakers, the sound is loud enough to fill a decent sized room. We tested it out in a party environment and found that the sound did not suffer even when cranked up to full volume.

The Sony CMT-G2BNiP is certainly is an impressive all-rounder. It looks the part and has the full bodied sound to match. Whether a CD player and FM/AM support is still necessary we're not so sure, but Sony firmly believes there is still a market for it.

Crucially though, it does offer all the type of connectivity support to keep the beautiful looking device up to date. Its retail price is £500, but you can pick it up for £360 on Amazon, and at that price this is a slick micro hi-fi operator that's a jack of all trades and masters most of them admirably.