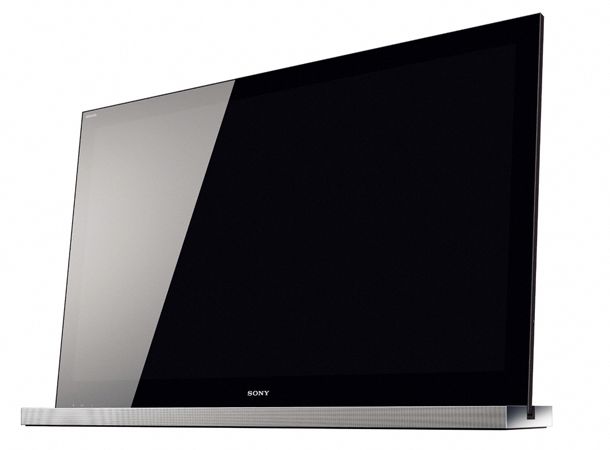 Sony's monolithic TVs have landed, bringing with them a dramatically minimal design and a raft of new features. As part of the NX range, this set comes with Wi-Fi connectivity and Bravia Internet Video, which includes Lovefilm downloads, BBC iPlayer and all manner of web widgets. With a Freeview HD tuner and LED backlighting, it's a big step forward for Bravia.

A single piece of glass serves as screen and frame, fitting flush into the metal bezel. With the gently illuminated Sony logo and subtle control panel that glows only when you brush it with your finger, this is a huge improvement on last year's plastic frames.

Edge-mounted LEDs illuminate the LCD panel allowing a narrow panel depth of just over 6cm and giving the picture a brightness and contrast boost.

Instead of a 3D chipset, like we've seen on the Samsung UE55C8000 this set majors on connectivity (the NX indicates networking), so the Wi-Fi module is built in and DLNA compliance allows streaming from your PC. There are direct USB and PC inputs too, but it's the downloadable web content that makes this TV so interesting.

Forget last year's Applicast widgets, which put slow and pointless web apps on your screen. Now we have Bravia Internet Video, which makes all kinds of useful content available. With wireless online access to ipTV channels like YouTube and SingingFool offering clips and music videos, or Lovefilm providing trailers and whole films in standard def, you'll never be stuck for something to watch.

Some of the content is heavily compressed and, to be honest, rubbish, but there's plenty of good stuff too and it's all accessible through Sony's brilliant XMB interface. That's the Xross Media Bar from the Sony Playstation 3, which puts all the apps and channels on the horizontal and vertical axes for very speedy selection using the remote control.

The superb remote deserves a mention at this point. It's a typically clear and intuitive backlit Sony design, but with a nicely textured finish and concave front. Flip it over and there's a single on/off switch.

Happily, the picture quality lives up to the slick design and flashy interface. A 1080p feed from a Blu-ray player will give you instant gratification with a pin sharp image showing a wide colour gamut and inky dark blacks from the 40-inch screen. There are a number of preset picture modes to choose from, or you can calibrate the image yourself for the best results.

Moving images are very smooth thanks to the 200Hz motion processing and there's no judder or blocking over long camera pans. The Bravia link function kicks in to optimize the settings between two Sony products, using Deep Colour over the HDMI connection to maintain the colour accuracy. It also sets the frame rate at 24fps to give the smoothest and most film like motion.

Thanks to the bright LED backlight, the picture is vibrant even in direct sunlight. Of course, a direct LED backlight with local dimming will give you better contrast during difficult dark scenes, such as we saw on the LG Infinia 47LE8900 but this set is still impressive overall.

The TV's own Freeview channels look a bit softer in standard definition, but the Bravia Engine 3 processor does a decent job of upscaling them to fit the Full HD screen. The good news is that you also have the free HD channels available and these look considerably more focused thanks to their 1080i broadcast resolution.

Sony's S-Master speakers make a reasonable fist of the delivering audio. Depending on the input, which seems to vary widely here, you'll find yourself adjusting the volume a lot. Even so, full volume always remains a little quiet.

Cleverly, when you slot the set into the optional aluminium table stand (that's the one you see in all the adverts, which is an extra £200) the TV speakers align with perforations in the stand to allow the sound to pass straight through.

Sony's monolithic TVs look slick and this NX model comes with some genuinely useful features – like the Freeview HD tuner, Wi-Fi and Lovefilm content. It's missing a 3D module and a full LED backlight, but we'll overlook that given its impressive all-round performance.