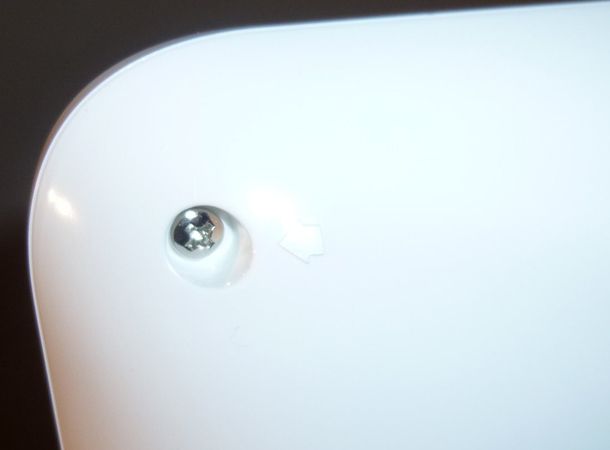 Buoyed by the success of its quad-pixel Quattron range, Sharp's TV boffins are once again walking with a spring in their step. Of course, Quattron is aimed at the high end; it's a lot more difficult to win friends in the mass market. Consider then the plight of the LC-37LE320. This edge LED screen ticks a lot of the right boxes - it's slim, with an interesting black bezel/white design - however it lacks a Freeview HD tuner and there's no network connectivity in sight. Given that this is the year of the smart TV could this deficiency be construed as rather dumb?

Although a little plasticy, the 37LE320 is undeniably well built and solid. The two-tone design is natty and the screen thin enough to attract admiring glances.

Check out our Sharp 37LE320 pictures

There are just two HDMI inputs on rear, although there is a third on the side. These nestle up to a component AV input and a pair of Scarts. Alongside the third HDMI is a CI (Common Interface) slot for Top Up TV, phono AV inputs, USB and PC D-Sub connector.

With no HD tuner on board and zero network connectivity, the feature focus inevitably falls upon the set's DLNA-certified USB media functionality. The good news is that the latter is extremely well executed. Video file playback is extensive and covers AVI with SRT subtitle support, MPG, MOV, MP4, XivD and hi-def MKV. All out test files were played back; the USB reader also plays MP3s and JPEGs.

The LE320 is built around an accomplished LCD panel, but it takes a little time and a good source to eek the best performance from it. A 100Hz picture engine and motion de-judder technology are on hand to offer the smoothest possible picture.

Resolution is relatively good. A pristine 1080 lines (with static images) falls to around 700 lines with motion, when the 100Hz picture processor is set low. Increase the severity of the processing and it's possible to nudge perceived detail up to approx. 800 – 900 lines. However, you will suffer some artefacting as a result. Look closely and you'll notice moving characters have developed a digital shadow.

Black levels are reasonable without being class leading. The LED backlight is uneven (no surprise there) but position yourself square to the screen and you'll not be overly aware of any shortcomings. Images from the SD Freeview tuner tend to look a bit smeary. There's a massive improvement when you feed the set hi-def, particularly from Blu-ray. It's worth noting that the set is not particularly tolerant of off-axis viewing. Sit off to the side and both colour and contrast slip away like celebrities leaving Mahiki. The real strength of the screen is the vibrancy of its colours and the dynamic snap of its pictures.

Audio is undernourished; still the TV makes a valiant stab at making the most of the modest 2 x 10w digital amp. There's a five-band graphic equaliser and Virtual Surround (actually more like Wide Stereo) mode. Onboard speakers will get you through the day, but for movie watching you'll want a standalone surround system.

We rate the 37LE320 as a slightly above average entry-level LED TV. It's capable of a good picture performance, although low-level image artefacts are evident. Its strengths lie principally in its stylised design and excellent USB media playback. Fashion conscious downloaders take note.