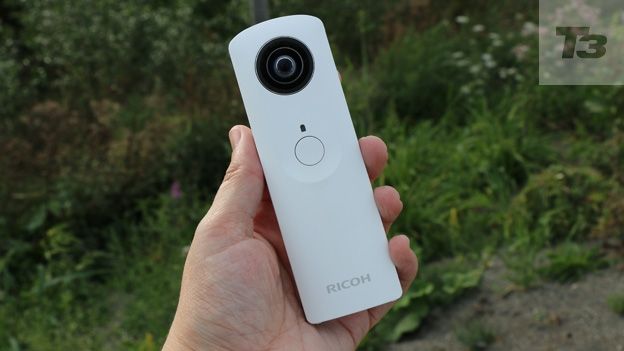 According to the maker, the Ricoh Theta is the world's first mass-produced imaging device that captures fully spherical scenes with one shot.

The device features two hemispherical lenses on either side to simultaneously capture two 180-degree shots, which are then automatically stitched together. Not unlike the Lytro light field camera, in terms of capturing innovative, interactive shots, the camera produces photos that you can navigate around to get a different view.

A concept model was initially unveiled at the CP+ camera show, although the design was slightly less streamlined, with the two lenses attached to protrusions on the top, looking rather similar to Ice Age's bug-eyed sloth Sid.

Thankfully, the device has since had a redesign, making it into a svelte 129 x 42 mm x 22.8mm unit that's easy to hold or slip into a bag or pocket. Weighing in at a lighweight 95g, the camera also comes with a neat, zip-up carrying case.

The smooth white finish of the camera means that it feels like a premium product and is also comfy to hold. There's are two 180-degree lenses - one on each side of the camera. Two images are taken simultaneously and then stitched together to make a spherical picture.

There's no screen on the camera, so images have to be viewed via the Theta iPhone/iPod app. This can also be used as a remote for lining up and capuring shots. The Theta has built in Wi-Fi, so teaming it up with your iDevice is nice and easy. You can also transfer shots from the camera to the app over its Wi-Fi connection.

The camera has a shooting distance of 10m to infinity and an automatic ISO range of 100-1600. Packing an internal memory of 4GB, the camera can store around 1,200 images, says Ricoh.

The spherical pictures that we captured with the device were truly impressive. Being able to scroll around a round, 360-degree image on a touchscreen in almost any direction is very neat indeed.

And the stitching between the two images is almost completely seamless - there's only a small blind spot at the foot of the product, which you can really only see if you're holding the camera in your hand when you take the shot (as it'll lose a chunk of your hand from the image). A tripod gives better results.

The picture resolution is something that Ricoh is remaining quiet on, the thinking being that this won't be a key selling point for this kind of product.

Pictures taken in a well-lit room turned out well, as did those taken on a very sunny day. However, the camera didn't copy very well with pictures taken on a more overcast day.

On the iOS app, you can navigate easily around the image, spinning it round and pinch-zooming: it's great fun to play with.

Being able to capture pictures like this is all very well, but what's really important is how easy it is to share them or view or store them somewhere other than the dedicated app.

While pictures look great when viewed on the iPhone app - they take on a much softer quality once they're transferred and viewed in the free desktop app.

Without the touchscreen capabilities of your iDevice to play with, you navigate around the image by using onscreen icons to move left and right, up and down and zoom in and out, which isn't quite as slick.

By plugging the camera into your computer, you can transfer the files directly. If you upload them to the dedicated desktop app, they can be viewed in their full 360-degree, spherical glory. If you view the jpeg images directly - you get a flattened out, slightly distorted version of the image, which is quite a cool effect in itself.

Once transferred to your smartphone, you'll be able to use the app to share your images on all the usual platforms including Facebook, Twitter and Tumblr as well as uploading to Microsoft Photosynth and Bing Maps.

The Theta is compatible with iPhone 4S, iPhone 5 and 4th- and 5th-gen iPod touch models from launch, with an Android app expected to land before the end of 2013.

As we've already mentioned, images look great on the app and while transfer isn't instant, it's much quicker than the sluggish transfer on the Lytro.

Sharing to Facebook and Twitter is nice and easy, although the posts take the form of a link redirecting you to the Theta site, rather than the pic itself appearing on your Facebook page.

Viewing the link on desktop gives you the same navigation icons that we mentioned earlier. However, viewing on a mobile device doesn't let you navigate around the picture quite as easily. There's no swift pinch zoom - you can hold you finger on the image for limited zoom, though.

The Theta features an internal litium ion battery, which can be charged by USB: Ricoh says that it can capture 200 images per full charge. We found that the camera lasts several outings before needing a recharge - and as much of the time was spent with the power left on, looking for a suitable shot, we reckon it did pretty well. It would certainly be good for a day out.

The Ricoh Theta is a nicely designed little gadget that's easy to use and gives great results. We were really impressed with some of the shots that it took, although it doesn't perform quite as well in low light.

As the with the Lytro - the sharing experience isn't ideal, as the image can't be viewed at the same quality and with the same amount of interaction once it's been shared. However, when viewed through the app - the shots are fantastic - they're still good on the desktop, but the interactive experience isn't quite as slick.

The Theta is a niche product, for sure, and unless Ricoh decides to integrate the tech into a conventional camera, it's likely to stay that way. We still want one, though.