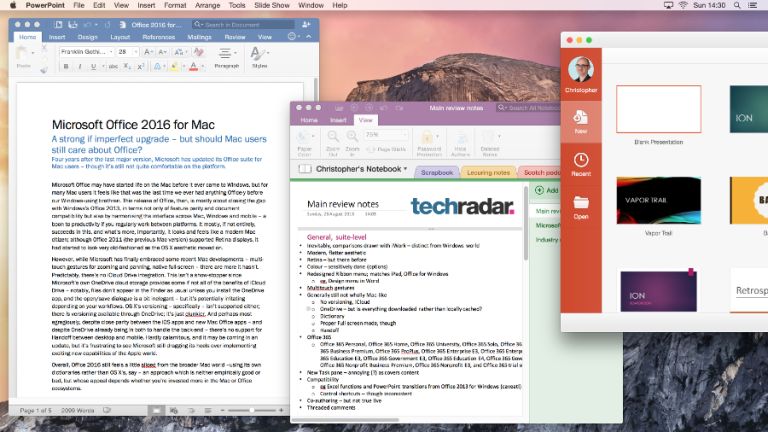 Microsoft Office may have started life on the Mac before it ever came to Windows, but for many Mac users it feels like that was the last time we ever had anything Office-y before our Windows-using brethren.

This release of Office for Mac, then, is mostly about closing the gap with Windows's Office 2013, in terms not only of feature parity and document compatibility but also by harmonising the interface across Mac, Windows and mobile.

It mostly, if not entirely, succeeds in this, and what's more, importantly, it looks and feels like a contemporary Mac citizen; although Office 2011 (the previous Mac version) supported Retina displays, it had started to look very old-fashioned as the OS X aesthetic moved on.

However, while Microsoft has finally embraced _some_ modern Mac developments – multi-touch gestures for zooming and panning, native full-screen – there are more it hasn't.

Predictably, for example, there's no iCloud Drive integration; not a show-stopper since Microsoft's own OneDrive cloud storage provides some if not all of the benefits, but this might irritate depending on your workflows. OS X's versioning – specifically – isn't supported either; there _is_ versioning available through OneDrive, but it's clunkier.

And perhaps most egregiously, despite close parity between the iOS apps and new Mac Office apps, there's no support for Handoff between desktop and mobile. Hardly calamitous, and it may be coming in an update, but it's frustrating to see Microsoft dragging its heels over implementing exciting new Apple capabilities.

Office 2016 isn't really about adding new customer-facing features – indeed, some features such as Word's audio-recording notebook view and PowerPoint's ability to export presentations as movies have been ditched – but there are some.

Notably, Excel gets some high-end features such as PivotTable Slicers – to help sift through vast swathes of data – and an optional Analysis Toolpak add-on to aid complex engineering and statistical analysis.

Outlook gets handy little features such as the ability to propose a new time when declining a meeting invitation, and the option of defining different signatures for new emails as for replies, but there's nothing wildly exciting.

For the first time on the Mac, OneNote, Microsoft's Evernote equivalent, joins the suite – though you have been able to get it free, standalone, through the Mac and iOS app stores for a while.

Office 2016 for Mac isn't about features, then, but about improved cross-platform compatibility and feature parity, and it's great that both the UI is more familiar across platforms and that documents are more portable between them.

Note, however, that it's imperfect; although, for example, compatibility with Excel functions created in Office 2013 on Windows has been boosted not all are supported, which means that despite Microsoft's efforts to appeal to the Excel power user with this update, there is still friction in mixed-platform environments. Most users will likely never do anything sufficiently advanced to run into this problem, but it's infuriating that differences exist at all today.

Elsewhere there are irksome inconsistencies too; collaboration, for example, is still much weaker than with Google Docs (and even iWork), and it's not applied evenly.

In Word, each party has to save a document for changes to be propagated (rather than them appearing live), while collaboration truly is live in OneNote, and in Excel, though you can share a document, only one person can work on it at once.

And for sure, some apps in the suite are stronger than others; Keynote arguably builds better presentations, quicker, than PowerPoint, Word and Pages are about equal for all but mammoth word processing tasks (with the latter edging it for basic DTP), and though Numbers is more capable than many people probably realise, Excel is still undoubtedly the daddy for hardcore spreadsheeting and data analysis.

Even if nothing else, though, Office 2016 _looks_ fantastic – simultaneously familiar to users on Windows but also thoroughly Mac, visually – and the optional coloured title bars help orientate you.

The redesigned Ribbon menu groups tasks logically and in the same way as the Windows version, and though there is still a sometimes confusion proliferation of ways to achieve the same things, most would agree it's a good solution to making Office's complexity usable.

Microsoft touts the new Task Pane, but honestly it's done little more than dock the floating Toolbox from earlier versions.

Overall, Office 2016 still feels a little siloed from the broader Mac world – using its own dictionaries rather than OS X's, say – an approach which is neither empirically good or bad, but whose appeal depends on whether you're invested more in the Mac or Office ecosystems.

If your life regularly involves swapping documents with the outside world, the hassle of roundtripping with import/export – not to mention the potential for translation errors – often means that relying on iWork or another Office competitor is a bad idea.

If this is you, you'll likely save yourself many a headache if you just bite the bullet and buy Office. (It's currently only available through Office 365; a stand-alone version is coming in September.)

While it's great to see a modern, improvement-packed version of Office for the Mac, it's sometimes wearisome that a suite which started life on this platform still doesn't feel entirely native to it, and the long period since the last version has let competitors build compelling alternatives that fit well with emerging work patterns – and has let many consumers discover them.

Taken in the abstract, this is a superb office suite, and we welcome what's happened on and under the surface – even if some of the areas for further improvement are glaringly obvious.

But on the Mac, where iWork is effectively free for many, and in a world where Google's web apps do collaborative working better, it's harder than ever to justify.

Enterprise and education users big and small will be grateful for it since it will help managed systems work more smoothly in mixed-platform environments, but most regular users should try it first to see if it brings any tangible benefits – and to ensure it hasn't ditched features they rely on.