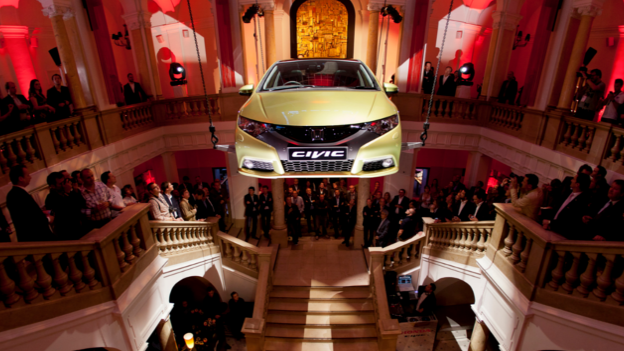 The new Honda Civic (2012) is the Japanese car maker's most exciting motor yet, boasting a carnival of kit, and a solid and sleek crust

The ninth-generation Civic has all the makings of a modern motor: a hybrid engine, a solid crust, a comfy interior and enough tech to keep the gadget freaks happy.

It may be the brainchild of our Japanese cousins, but the Civic has long played a valuable role in Britain – in the past 18 years, over 1m of these babies were built on our soil, specifically, in Honda's Swindon factory.

Worldwide, an incredible 40m Civics have been sold since the first model landed back in 1972, making it the Japanese car-maker's most successful four-wheeler ever.

While the new Civic has shied away from its minimalist roots, Honda has kept the brand's most expedient features such as the spacious boot and ridiculously stylish exterior - ultimately, among some of the key selling points of any vehicle. But what else is on board?

We took the Civic 2.2 i-DTEC ES Manual for a spin to find out.

The technology on board the Civic is akin to what you'll find in the Range Rover Evoque.

You have keyless technology giving you the ability to stop and start the car without taking the keys out of your pocket, and rear-mounted cameras, which display the view behind you onto the on-board monitor, so now you have no excuse for putting a dent in the rear.

Underneath the arm rest you'll find a USB and AUX connector, which you can use to hook up your MP3 player to the entertainment system.

Connectivity options are boosted by the inclusion of Bluetooth, which you can use to hook up your smartphone to make and answer calls safely, as well as to pump out your playlist.

If you're a bass freak with a love of high-volume track-bashing, you'll be glad to know the Civic's speaker system is clear, sharp and never fails to miss a beat.

Any external device, from your iPod to your iPhone, can be controlled via the switches on either the dashboard or the buttons on the steering wheel.

Our review model didn't have the integrated sat nav system, which is available for an additional fee or comes standard in both the EX and EX GT trims.

The 2.2 diesel engine is smooth and barely makes a noise, while steering is both sharp and responsive, and breaking is on-point. All these features combine to create an effortless and smooth driving experience.

Keeping track of your carbon footprint (or in this case, wheel print) is made easy by a nifty feature called ECO Assist, which uses light signals to inform you how your driving skills are affecting fuel economy.

Also on board is an 'Econ' switch, which activates the car's eco settings, so fuel-scoffing features, such as air con, are automatically adjusted to consume as little of the good stuff as possible.

This will, in theory, help you save money in the long run as the cost of fuel continues to rise.

Green but mean, the 2012 Civic makes other hybrid road warriors look whimpy. While the price is a tad high, fuel-saving technology ensures you won't be out of pocket in the long run.

Space is in plentiful supply, which is ideal for families, but the cool interior kit and sleek design means the fellas will love it too.

Overall, we were pretty impressed by this motor, which has all the makings of a great car: a solid design, smooth engine and a high-tech dashboard. It's Honda's best Civic yet.