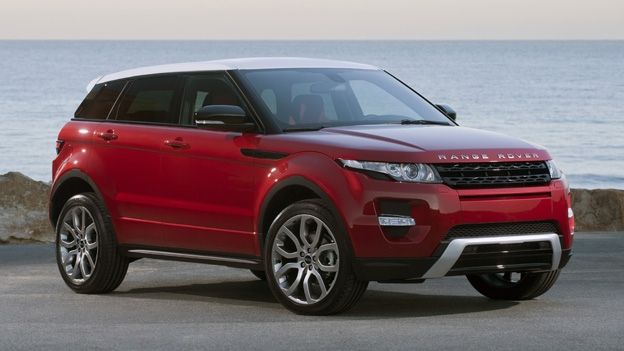 The Range Rover Evoque is bold, beautiful and kitted out to its core - arguably one of the best cars we've ever tested. Find out why...

Before we begin, let's get one thing straight: the Range Rover Evoque isn't your typical SUV. Fair enough, it's powerful, bulky and, despite being the brand's most fuel-efficient vehicle yet, guzzles more pints than a groom-to-be on his stag do. But it feels extremely light and emits less noise than its bulkier siblings.

Oddly, it's being billed as an economical and compact motor, which is silly because it's not as economical as, say, the Peugeot 3008 Hybrid 4, or as compact as the MINI Cooper Roadster, but does boast a luxury shell that's on par with the Audi S7 Sportback.

Designed to take on BMW's X1 and Audi's Q3, this top of the Range (see what we did there?) motor will be on sale in 160 countries – 40,000 orders have already been placed so far – and launched this year to rave reviews, but does it live up to the hype? We took it for a spin…

Self-confessed audio heads will love the brand's 12-channel, 11-speaker sound system. Delivering crystal clear beats each time, you can bash out your playlist simply by hooking it up to your iPod via a USB port hidden in the arm rest.

Fortunately, connectivity isn't limited to USB alone. It's stupidly easy to sync the car with your smartphone via Bluetooth, giving you access to your entire phonebook and allowing you to make and receive calls using a set of controls on the steering wheel.

Although saying that, we did have trouble at times with the Bluetooth connection, which cut out from time to time. We're not sure why this was but it was tremendously annoying, especially while driving.

Although rear visibility leaves a lot to be desired, there is a rear-mounted camera that displays the view from behind onto the on-board monitor when the car is in reverse gear – a brilliant feature as far as we're concerned.

Also in the mix is an on-board TV. Flick it on for ultimate TV madness (only when you're stationary, mind) and, if you're buying this baby from new, you have the option of adding screens behind the front seats for back seat passengers.

Overall, we found the on-board entertainment system simple and straightforward to use. The touchscreen display is super responsive and, although not pin-sharp, projects functions clearly.

The four-wheel drive Evoque is powered by a 240-hp, 2.0-liter turbocharged four-cylinder engine that's charismatic beyond belief and compliments the six-speed automatic transmission, while steering is both precise and super responsive.

One thing we were mightily impressed by was how silent the engine was while driving. Despite packing a bigger grille and more heat than a George Foreman, the engine feels quite smooth and doesn't overwhelm the car, making the driving experience that much more pleasurable.

Saying that, take off is quick (0-60mph 7.1sec) and effortless but careful not to get caught up in the moment otherwise you might trigger an expensive flash.

Beautiful, bold and kitted out to within an inch of its life, the Evoque will make you fall back in love with driving all over again.

It accommodates all your electronic essentials, from your smartphone to your iPod, and delivers first-class entertainment that will keep you amused while on the road.

The attention to detail is staggering; it drives like a dream and screams of luxury - overall, a visually-pleasing effort. It's not the cheapest motor in the world to run, nor is it as compact or economical as billed, but when a car looks this great, it's expected.