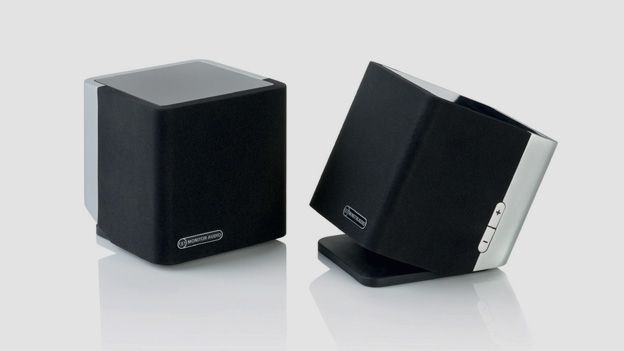 Could Monitor Audio's Airstream WS100 'wireless' speakers be the answer to the poor sonics in your laptop or desktop computer?

It's no surprise that laptop sound and desktop computers sound weak but theres an easy way of solving that issue. Either you opt for headphones and perhaps a boost like the Meridian Explorer sonic wonder gadget or you get a pair of speakers.

Generally speaking, add-on speakers for gaming are made by PC manufacturers and offer a loud, but unfocused sound. The B&W MM1 speakers are the exception but at £399, they're nearly twice the price of the WS100 set up. This is where the Monitor Audio Airsteam WS100 speakers come in.

Matching either traditional laptop or desktop systems, each speaker is heavy and premium in look and feel. The aluminum cubes look smart and although the glossy top attracts fingerprints, they look better than the price tag suggests.

The rubber base allows the speakers to tilt back by 20 degrees, designed to fire towards your ears from a desk, which is a clever addition.

The WS100s are wireless, to a point. They are attached to each other by a cable and need a power source - the wireless feature refers to a dedicated USB dongle which streams music from your computer.

It's not Bluetooth or AirPlay - it's SKAA, a wireless technology that avoids the drop out of AirPlay and doesn't need an internet connection. You can pair four sets of speakers if you wish and the dedicated dongle technology is impressive and simple to set up.

A remote control is a surprising addition, but given that you can connect a smartphone or tablet via a wired connection, it's a nice, attractive extra. We would have liked to have seen a digital Toslink input for use with games consoles (they match the PS3 perfectly), but it's an acceptable omission for the money.

Set up is simple - you're confined by the cable which links the two speakers, but it's long enough to fit the broadest of desks. Set your sound output to USB and the speakers spring into life. You can see whether they're on via a small light behind the top left of the speaker grille. Tilting the speakers back for the best performance is easy and feels natural.

Powered by amplifiers in each speaker, the WS100s are assured and loud. The cube style means there's plenty of space for a meaty sound and the stereo effect is made even better by tilting each speaker back.

If you're used to streaming to a mono dock or Sonos system, the balanced stereo instantly impresses. Taro by Alt-J sounds composed and detailed, doing a good job of tracking the acoustic indie gospel to Bollywood dance party.

A 16-bit, 44.1 Khz FLAC file of Neil Young's Everybody Knows This Is Nowhere shows how powerful the bass response is and while drums can't match a decent pair of headphones, it's by no means a failing.

Sonically, these speakers beat many budget hi-fi systems hands down - without the design, remote and wireless skills, they would still represent a decent buy.

If you have a home office and need decent sound for the price of a pair of decent headphones, these speakers are enough to worry rivals at twice the price. Build is amazing and that's not something we say lightly about laptop speakers.

Sound rivals the best dock systems at this price but then beats them for laptop and desktop use by offering a 1m stereo soundstage. We encountered an occasional buzz when using the line-in input for TV and iPod use, but the wireless dongle is excellent and practical if you want to place these speakers on a bookshelf.

Sit back from them on a desk while they're tilted back and you'll be surprised at the performance. They're worth every penny if you can live without AirPlay and Bluetooth.