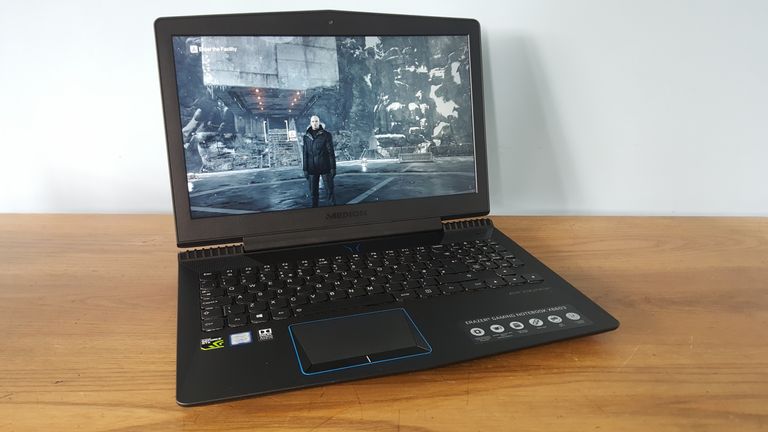 For those looking for an immediate take-away from this review then this is it -
the Medion Erazer X6603 is simply a good all round mid-tier gaming laptop. It has good current generation hardware, a compact functional design, and - crucially - doesn't cost the Earth. As such, if you are in the market for a gaming laptop that will play all of today's top titles really well and costs around a grand then you should definitely consider the X6603.

For those who want more information, as well as imagery and video, then read on.

The Medion Erazer X6603 comes in a medium-sized black box with crazy gaming robot artwork on the front and back, while on one side the system's specifications are listed. Open the box and you are presented with the laptop and a side compartment filled with the system's power supply. The only other thing in the box is the system's paperwork and manual.

The laptop itself is held very securely in both a black baggy (not a carry bag) and a pair of foam holders. Extracting them from the box is straightforward.

Once the laptop is removed from the baggy and holders, and its power supply (two part) removed from the box, the system can be opened. There is no other packaging asides from a black screen protector (seen below).

With the system out of the box we could take a closer look at the design. The first thing we noticed about Medion Erazer X6603 was its flared rear speaker arches, which have a honeycomb lattice inner cover with grid surround. We were unsure about the design from certain angles, however, from others it seemed on the money.

Extending down from the top right speaker is an imprinted extension of the honeycomb lattice pattern, which juts out at a jaunty angle toward the keyboard's numpad, and embedded within that is the system's small circular power button. This has a concentric ring finish and feels pleasingly cold to the touch.

The system's casing is matt black, plastic and - surprisingly - pleasingly robust, with no bend under gentle pressure and a solid weight that communicated premium and not budget. The front end of the casing and screen is gently angled in a go-faster arrow tip shape, which adds a little bit of flare to the otherwise understated machine.

The system's keyboard is low-profile and well-spaced, while the touchpad is spacious and surrounded by a neon blue boarder that looks class. Speaking of neon blue, it appears again on the lid of the system, colouring two boomerang-shaped go-faster lines that partner an etched "erazer" logo.

As is quite obvious from the system's specifications (see above boxout), Medion has very much prioritised top internal hardware over standout chassis and screen quality, or extended features on this machine, which is obviously to keep the price low. The Intel Core i7-7700HQ CPU is absolutely bang on the money here in our opinion, offering serious processing power both in and out of games. We ran some encoding runs, converting Ghost in the Shell from one format to another, and were very pleased with the results.

The system's 8GB of RAM and, most pleasingly, Nvidia GeForce GTX 1050Ti 4GB VRAM, are also excellent parts for the price. We reviewed a few gaming laptops earlier in the year equipped with GTX 1050s and we're more than happy with the performance at this 1080p resolution, however, the step up here to the GTX 1050Ti made a marked difference in frame rate, specifically when operating with DirectX 12 options switched on in games.

Indeed, if you compare the 3DMark benchmark scores (see above boxout) to that of the Asus ROG Strix ZX753VD-GC266T, you can see the difference the Ti makes as, aside from the GPU, they are basically the same in terms of hardware. To take just one benchmark example, where the Strix scored 1,750 in Time Spy (DirectX 12), the erazer scored 2,478.

In terms of the screen though Medion has clearly cut a little corner here, as while the 1080p, 1920 x 1080 matte screen is perfectly partnered in terms of resolution for these specs, the colour and contrast were very average. We could counter this a bit by jacking up the screen's brightness to full, however, obviously this isn't ideal and, in addition, it puts an added drain on the system's battery, which could deliver only a couple of hours of gaming action off a mains connection.

In terms of ports we were impressed to see that the X6603 comes with not only three USB ports, a HDMI port, Ethernet connection, SD card reader and 3.5mm headphone port, but also a USB-C port too. The speakers were average.

We've got a standard suite of test games currently at T3 Towers and we threw many of them at the Erazer to see how it would perform. Here are our thoughts from a few of these titles.

Deus Ex: Mankind Divided is always a good test for a gaming laptop as, to put it bluntly, the game is really not optimised very well so it is rather demanding on a system. It also has a DirectX 12 mode, so it is perfect for throwing at cards that boast DirectX 12 compatibility.

Simply put, at this resolution the GTX 1050Ti absolutely crushed the game, with T3 capable of turning everything up the maximum and getting buttery-smooth gameplay, even in the most NPC-filled exterior environments. On lesser cards we have seen a 10-15 fps drop when DirectX 12 is enabled in this game, however, here on the X6603, it made zero gameplay difference, with the stealthy-shooty-cyberpunk action of Deus Ex remaining super fast and lag free. Check out the above image gallery and below video for a taste of the results.

Slow kill-em-up Hitman was again, even with everything turned up the max, an incredibly smooth experience. Many of this game's levels have hundreds of NPCs and very detailed and complex levels, so watching the Erazer deliver well north of 30 fps frame rates was super satisfying. Sure the game doesn't have the most technically complex engine, however, it looks good and very much relies on a smooth frame rate for the player to execute - literally! - their mission. We experienced no lag whatsoever, even when explosions and particle effects started to get thrown about.

Rise of the Tomb Raider is not only an excellent game, but it is also delivers DirectX 12 compatibility and generally looks gorgeous. Some of the sweeping vistas and ruined temples are visually spectacular, while the lighting and shadow effects, let a lone the physics effects on cloth, hair and environmental obstacles, can be very demanding on a system.

As can be seen in the image gallery above though, with almost everything turned right up to full, the game scored a super impressive 49.22 fps in the game's internal benchmark and looked fantastic. Gameplay was buttery smooth and made hunting Lara's enemies and traversing trap-filled tombs a pleasure. The detailed models on show in the game were beautiful to behold running this well.

Basically, our take away from actually playing games on the X6603 was very positive and it made us question whether the system could, once connected to a higher resolution monitor, push today's titles out at an even higher resolution comfortably.

On the one hand there's nothing particularly stand-out about the Erazer X6603. Indeed, there are similarly specced systems on the market right now that if you tried to choose between them, on hardware alone, would be like trying to choose between Ketchup and Catsup as Mr. Burns once famously tried to do. The laptop has a few things that aren't ideal too, such as the average screen and battery life.

However, it is cheaper than comparable models, has great core gaming performance at 1080p (and could probably go higher), and is pleasingly compact and quiet too. Basically, it does what it is supposed to do - i.e. to play games smoothly - very, very well and at this price we're not sure you can expect much more.

Overall therefore, the Medion Erazer X6603 should be a system that is, without doubt, worthy of your consideration if you are in the market for mid-tier gaming laptop.