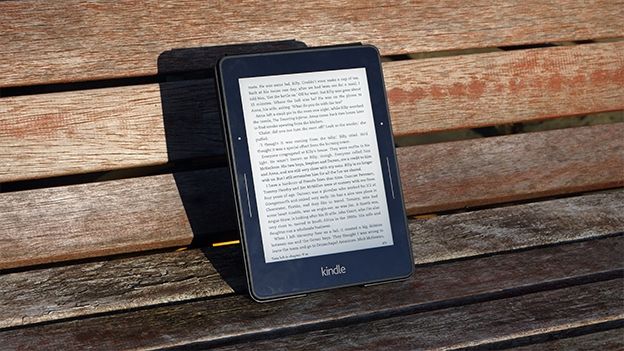 There's something odd about the Kindle range - or ebook readers in general - as they don't seem to be following the trend of 'normal' tech.

The average standalone device, be it a flip camera, GPS or handheld console, is quickly getting absorbed into the all-encompassing smartphone, as it becomes sharper, clearer, faster and cheaper than the thing you bought a few years ago.

And yet, I've yet to come across any phone or tablet that beats out an ereader for digital reading...and Amazon is banking on that to continue with the Kindle Voyage.

Of course, we're still in a world where people still cling resolutely to the printed tome, and I doubt Amazon is going to entice those people given this thing costs £169 to buy. But then again, price aside, it's the perfect device to nab those readers, given it's got the clearest screen, the textured surface (supposedly to mimic the feel of a page) and an incredibly light frame.

It's sold as the Rolls Royce of the ereader world, the perfect gift for that special someone who really loves to get lost in book after book and doesn't want to compromise. But even if it hits those marks, is it still worthy of the lofty price?

The thing that really sets the Kindle Voyage apart from the rest of the market is the screen. It's sublime. A 6-inch backlit affair, it's superbly sharp and almost completely uniform in its brightness.

The screen is 300DPI, which makes it one of the sharpest on the market, and really helps with making the letters appear clearer on the display... kind of important if all you're going to be doing is looking at words while using this thing.

It's a tangible upgrade compared to the Kindle Paperwhite, with the screen now flush with the sides, rather than being feeling like a separate section slapped together with the chassis. It certainly feels more premium.

The display is also touch sensitive, so if you don't want to use the buttons (more on those shortly) then you'll be able to navigate through by tapping near the words... this is also really useful for elements like learning definition of words or highlighting sections you want to return to later.

The brightness of the screen is also finally able to be controlled based on your conditions, meaning if it's a little brighter the screen will boost in luminosity. Darker times, darker screen. You get the picture. It's a little on the dark side generally (not that it wants to fight Jedis, more than it could do with being a couple of lumens brighter) but that's manageable.

OK, this isn't technically a key part of the Kindle Voyage, and it costs a little bit extra on top of the fairly hefty outlay for an ereader (I don't even want to tell you that it costs £55...) but it is rather awesome. It folds back on itself to provide a stand, is an excellent and mark-proofing case for your expensive device and even has an Apple-esque smart cover effect.

So this means no more fiddling around for the power button (which is now hidden on the back, for all your Kindle Keyboard or Touch upgraders) to turn off the display. You'll enjoy this as it stops the worry of battery drain, and looks nifty when you open the cover straight back to where you were in the digi-tome.

Books can't do that... unless you put a bookmark in.

One of the big things that makes a return on the Kindle Voyage is the buttons on the side of the bezel. These allow you to move forward and backwards from either side... a really nice touch that initially I wasn't bothered about.

The reason this is so good is that if you're on a packed commute you can easily read with one hand, and cling on for dear life while being rammed nose to nose with a stranger with the other. It's the little things...

The buttons themselves aren't the most accurate, with the footprint to hit them with not the widest. That said, I did get used to it, but only after a couple of weeks. Some investigation showed that you can up the sensitivity, and that really helped, but only if you trudge through a menu within a menu, Inception-style.

If only these were a little raised. That would make it really easy to locate them when your fingers inevitably start to slide, the sweat glands starting to power into overdrive when you realise the person you're stuck so close to is actually rather attractive...

The design of the Kindle Voyage is all about the screen, meaning as little chassis as possible to get in the way of you staring at that 6-inch display.

The rear is that combination of matte and shiny plastic that we've all come to know and love (loathe) from Amazon devices, the slippery bit perplexing given it seems to lower the premium feel of any device it adorns.

At 162 mm x 115 mm x 7.6 mm, the Voyage is much less bulky than the already-svelte Paperwhite, and much less than the Touch and Keyboard, and packs the aforementioned Fire-like chassis construction.

The upshot? The Voyage is really nice to hold for extended periods. The 180g weight might sound like a lot compared to the ultra-light smartphones on the market right now, but it's very comfortable over a long period.

And even with the mega-expensive Origami case on, the Voyage will still fit comfortably into nearly any pocket. Well, that varies on the tightness of your clothing, but perhaps you should have a word with yourself if that's happening.

The battery life of the Kindle Voyage is probably the only confusing thing about it. It's good, but it's not the one... if the one you're looking for is an ereader that can go for weeks and weeks without needing a charge.

I'm not saying it dies in hours, or even days, but sling it in a bag for a week and you'll find that the battery starts to drop a bit too low. It could be because I used it more than any other ereader before, such was the experience, or the ambient light sensor, but it was a trifle annoying.

There are ways you can solve this, by turning off the network connectivity (especially if you go for the cellular version) but in doing so you deny the chance to use the awesome features like Whispersync, which takes you to wherever you've read if you jump between devices.

Ah, if only this thing wasn't so expensive. It's a perfect gift for a loved on, but anything over £150 makes you question just how much you really love them.

It's hard because the Kindle Paperwhite is still a very competent device for reading books on the go. In fact, most are, bar the odd excursion into fuzzy screens or non-uniform lighting.

But that said, there's still something that feels right with the Voyage. It's the same as buying the hardback, limited edition of your favourite book, even though the words are the same. Or upgrading to first class on the train ride back home, even though it's not worth it for the time you'll spend in the quiet with that extra leg room.

The Kindle Voyage is a luxury device, no doubt about it. You don't need it, and even with all the benefits I've listed about I still can't say it COMPLETELY justifies that tag.

But if you're going to be reading loads of books to and from work this year, then think about the investment. It won't do many things that another Kindle won't (the interface is virtually identical to the other new models) but if you want to get the words from the author's pen into your eyes the sleekest way possible, the Kindle Voyage is the way to do it.