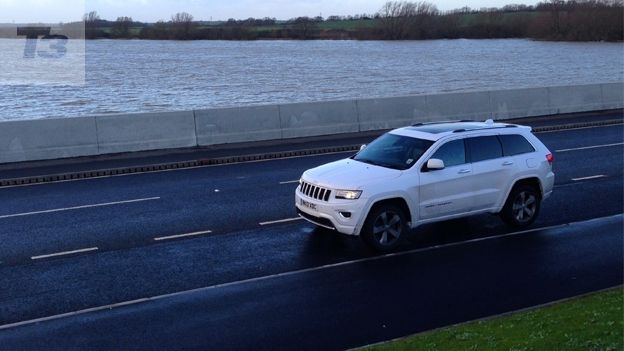 The Jeep Grand Cherokee has a standard specs list long enough to satisfy even the hardiest tech junkie but is the car as good as the tech?

The new Jeep Grand Cherokee has been given a facelift both inside and out and now it's gunning not just for the likes of the Audi Q5 but also the king of the pack, the Land Rover Discovery.

The US car industry is back, since the recession workers have been slowly returning to factories reviving our European fascination of the vehicles that have come to define the US. From muscle cars to giant SUVs the challenge has been making them desirable whilst removing the classic sense of guilt that comes with buying a 'gas guzzler'.

From first glance you already feel a pang of 'eco guilt', the car just looks mean. It's lower, more muscular than the last model, the 2014 Grand Cherokee is unashamedly aggressive in its styling and to be honest we're big fans.

Jeep clearly takes pride in its off-road heritage and similarly to Land Rover it's building cars that, despite being embraced by the tarmac-hugging masses, will still be able to hit the fields should you with.

The new Grand Cherokee comes with Selec-Terrain, an off-road system directly throwing up two fingers at Land Rover's own 'DIY off-road' setup letting you select a surface type and then simply drive with the car's high-tech internals doing the thinking.

You can pick between Snow, Mud, Sand and Rock with the car intelligently adjusting wheel height, power and steering to compensate.

Does it work? Yes. We're still not convinced by automatic off-roaders but the Grand Cherokee balances its two personalities well giving you enough control of the 4-wheel drive that you don't feel out of the loop thanks to a flappy paddle shift system and the comprehensive instrument panel down to your left.

The interior is a plethora of technology from its giant 8.4-inch touchscreen display to the 7-inch digital instrument panel that sits behind the wheel.

Via the 8.4-inch touchscreen you can access Uconnect Jeep's in-car OS giving you access to the DAB Radio, Sat Nav, Media system and Phone. You can also control the front Heated and Vented seats, Heated wheel, and activate the Mirror Dimmer which at a press of the button removes the glare from cars behind you.

The 7-inch instrument panel gives you the choice of two digital speedometers and then a myriad of different info screens showing live tyre pressures to actual wheel height data showing the strain on the car's suspension.

The first thing you need to accept is that you're buying a Grand Cherokee, so at some point showmanship is going to rear its head.

It does, but not in the garish way you'd expect, the Cherokee's interior is actually incredibly pleasant from the leather seats to the subtle wood detailing on the dashboard and the steering wheel.

With some car manufacturers designing their interiors to be so minimalist they're verging on dull it was a refreshing experience to have some shameless mood lighting in the cabin. We'll even forgive the 'Overland' logo stitched into the seats.

Under the bonnet you'll find an all-American 3.0-litre V6 TurboDiesel that boasts 247bhp along with a belting 0-60mpg of 8.2secs.

Impressively Jeep claims it'll still manage 37.7mpg, and while that doesn't sound great compare it to the competition and it's on par with the 3.0-litre V6 Audi Q7 and in fact trumps the Land Rover Discovery.

We found throughout that mpg was around the high 20s through urban areas, dropping significantly the moment we hit a country lane. Crucially though it handles motorways increadibly well, the mpg was well into the low to mid 30s, arguably even more so when the adaptive cruise control was engaged.

Don't for a second think that means Jeep have lost their touch though, switch the car into Sport mode, floor the accelerator and you'll be greeted (albeit after a substantial wait) with a V6 roar that will fill the cabin with guilt and a childish sense of glee.

Yes it's unashamedly American both in its styling and the way it handles itself on the road and for some, that'll be enough to put them off straight away.

For the rest of you consider this, it's economically on par and in some cases better than its rivals, including lest we not forget the Land Rover Discovery.

It's also cheaper than its rivals at £45,000 and has a standard specs list that frankly puts most of the competition to shame.

If you're in the running for a 'proper' SUV that manages to be as much fun as it is seriously capable then the Grand Cherokee should be on your list, if not at the top of it.