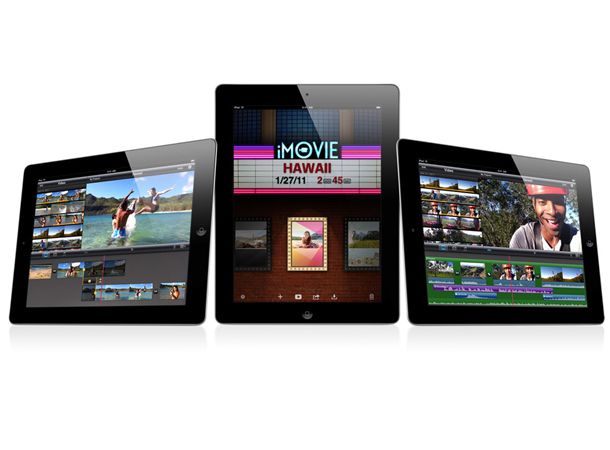 It's been said that the true potential of the iPad will only be unlocked when it becomes a viable content creation tool, that can contend with a laptop. Apple adding a HD video camera and a touchscreen editing suite, could go a long way towards fulfilling that destiny.

The new iMovie app for iPad 2, a slightly scaled back version of the Mac version allows videos to be shot, trimmed, voiced-over, subtitled, sound-tracked, exported and uploaded in a completely self-contained package.
The app was a five star winner on the iPhone 4 when it launched last summer, so how does the larger screen version, complete with new themes and exporting options, perform on the iPad 2? Let's find out.

Launching the iMovie app presents you with a completely blank canvas. Anything you want to include in the app has to be recorded, imported or added into the timeline, so it's essential to have access to the iPad 2's new video camera from within the application.

The only problem here is that the iPad 2's 720p HD video camera isn't nearly as good as the iPhone 4's, so footage often appears grainy and bereft of life and vitality. Shooting video with this device isn't exactly the most natural experience either.

Once you've recorded your footage, the clip will appear in the video roll pane. From there you can trim the edges with tenth-of-a -second precision and drag and drop it into your timeline.

The interface is extremely easy to master thanks a simplistic design and the iPad 2's magnificently responsive touchscreen. This entire operation could have been extremely fiddly, but editing is a quick and easy process.
Clips can be separated by a cross dissolve or a transition unique to your theme. You can also fade in and out at the start and end of your movie. A double click on the clip will offer the chance to add text, change location information and the volume, while dragging it out of the timeline removes it.

If you're simply looking to create a photo slideshow, then you can import snaps from your iPad's Photo Roll and import them in the same way.

We love the fact that you can easily drop in any track from the iPod application and place it into the timeline. Unfortunately you can't trim or move the song around your timeline and we'd like to be able to fade it in and out, but iMovie doesn't allow that either.

There's also host of copyright-free theme that accompanies each video theme, plus a host of juvenile sound effects like “Boing” and “Bell Tower”, but If you want to give your clip a really pro feel you can record your own voice-over directly onto the iPad. The quality isn't bad at all. Adjusting the levels of each track so they don't drown each other out is straightforward too and in some cases it works automatically.

The themes decide the look and feel of the titles and, if you choose, the music in your video. There are fun options like Travel and Playful, while Bright and Modern are quite stylish. The most interesting addition, however, is CNN iReport, which encourages users to edit their videos in a certain style and then export them direct to CNN's popular citizen journalism portal. It's perfect if you're in the midst of a newsworthy event because the editing process is so quick, all you need is a Wi-Fi or 3G connection to get it online. It's a very cool idea and might get your video on telly.

However, we found that unless you export in HD, sending the video anywhere leads to heavy compression and a distinct drop in quality. If you're serious about maintaining the quality, then you can always export it directly to your camera roll and transferring it to your PC next time you sync.

There's no reason why this app won't be updated to include AirPlay to enable you to share it with your Apple TV box in future, but at present it's not available.

The functionality of the app goes beyond anything we could realistically expect from a mobile app. If you ensure you've shut down most of the other apps you have running, iMovie runs extremely smoothly fantastic. If you don't, the A5 chip struggles to handle the power and things can get a little sluggish and juddery. It's not so much a complaint, more a recommendation to help optimise performance. We really wish the iPad 2's video camera was a little better though.

While reviewing this app, we had to keep reminding ourselves that it only costs £2.99. There's a massive amount of functionality on offer here, in a brilliantly simplistic, self-contained package. This isn't Final Cut Pro, far from it, but for less than the price of a pint, it's incredible value.

While there are a couple of additions we'd like to see to bring the mobile version in line with the desktop app, there's enough here to create a great looking video project and it's so easy to use, even video editing novices will have it mastered in no time. Download it as soon as your iPad 2 arrives.