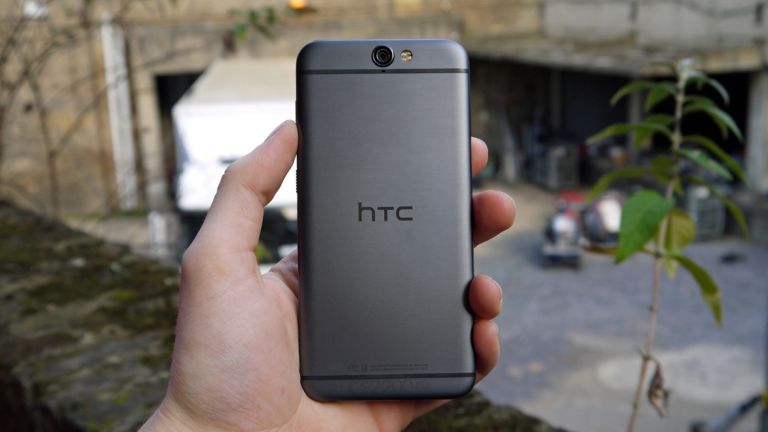 When you're looking to reboot a brand, there are a number of ways to go. One is to stuff it with specs, hoping the audience will love the powerhouse they're getting. Or, if you're HTC, you shed the skin you've spent years creating and go down a different direction.

Launching in October means one thing: you're going up against the iPhone in terms of interest in the Bright New Thing (OK, with a smattering of Sony too) - and it seems HTC's taken that competition a little too seriously, making something that's a little too similar to Apple's latest effort in a number of ways.

It's cheaper for a start (coming at £429) which means it's competing more with Sony's Xperia Z5 Compact.

This isn't HTC copying Apple though - the brand has has this design style for years, from the HTC First Facebook phone to the One M7. The all-metal body, rounded edges and polycarbonate strips to let the signal out are pure HTC.

But to make a phone that looks so similar is asking for trouble - no matter if it was your idea first. That said, what's emerged is a great-looking, robust phone with some decent specs - given Apple doesn't run Android, the comparisons are kind of moot.

The rounded edges and flat back feel smooth and luxurious in the hand, with your digits wanting to wander all over the frame when you're idly playing with the phone.

They'd find the ridged power button - a great move, as it helps differentiate the volume switches from the locking key. It's again well made, so you'll always get the feeling of a premium phone.

There was a slight rattle in our review sample, but it's nothing major. If you're desperate to make the comparison with Apple, then this doesn't quite have the same feel as the iPhone in the hand (there feels like a lower grade of metal used) but it's rather subjective.

HTC's gone for a 5-inch Full HD Super AMOLED screen in to act as the window into the phone, and it's a great choice. It fits nicely in the palm as a result, has great contrast ratios and colours look really super.

It's not a QHD offering like Samsung, LG and Google are pushing, but it's perfectly sharp enough for a phone like this.

The HTC One A9 is a phone that's all about design rather than new and innovative features - there's no BoomSound speakers on the front, for instance. That's not to say there aren't some new elements to play with - you'll just have probably already seen them on other phones earlier this year.

For instance, the camera is a 13MP effort - down from the near-20MP sensor of the One M9. It's better though, with richer photos that are laced with more detail and less over-sharpening. It's nowhere near the power of the Sony Xperia Z5 range though, with the speed of opening the app and taking a photo nothing special.

The results are good (if you try) though. While auto-mode photos are nothing to write home about, there's support for RAW images and if you tinker with the manual mode there's some decent shots to be snapped.

HTC has joined the rest of the high-end Android world by plonking a fingerprint scanner on the front of the phone, and it's one of the best we've ever tested. The speed with which it unlocks the phone borders on the unbelievable at times - we even managed to get an accurate reading through a latex glove.

There are times when that's a good thing.

It'll also function as a secondary home button too, although there's no clickery here in the same vein as Samsung's Galaxy S6 or the iPhone 6S.

In terms of how the One A9 compares to the rest of the market, well, it's not really a winner anywhere. With a lower-spec Snapdragon 617 chipset running the show, it's a good performance but not the cutting edge specs you'd expect from a flagship phone - this is a very good mid-ranger.

The battery life isn't anything amazing - it'll be dead easily by the end of the day, meaning you'll need to reach for the charger. At least it charges quite quickly, and the performance it manages from the smaller 2150mAh battery is impressive.

But it's beaten by the efforts of the Sony range, with the Stamina mode offered bringing a longer battery.

However, it is one of the first non-Nexus phones to offer Android 6 Marshmallow, and that offers a lot of benefits from a better ability to manage sleep mode to better support throughout the system for different standards.

One of the big things HTC is touting is the audio experience from the One A9, with a dedicated DAC and upscaling to hi-res audio breathing new life into low-res Spotify streams.

In practice it's hard to hear the big change - BoomSound enhancement is still onboard to add a greater range of obvious audio enhancement to proceedings, but there is definitely a richer sense of bass to play with.

The interface is very Android. A load of the HTC apps have been removed to focus on Google's own (Music has been replaced with Google Play Music, for instance) to 'streamline' the interface and improve the amount of onboard storage offered.

It's neat and the blank canvas it offers means you're always getting the chance to stamp your own look on the phone - HTC Themes is excellent for this thanks to the fact you can tweak everything form the colours to the wallpaper to the font to match your style.

This isn't the time for an HTC flagship phone - that will be around March 2016 - but there's still a feeling that this is an important device for the brand that desperately needs a win.

The design is strong, if too familiar, and the overall operation is speedy enough and slick under the finger - plus being one of the early Marshmallow-packing handsets is nice to see.

But there's nothing here that particularly stands out as impressive. It's a well-packaged phone that does very little wrong, with a decent camera, OK battery life and a nice screen. But it's too under-powered and over-priced to trouble the big-hitters - a phone for those that like a thin, slimline device and are too sucked into Android to think about moving.