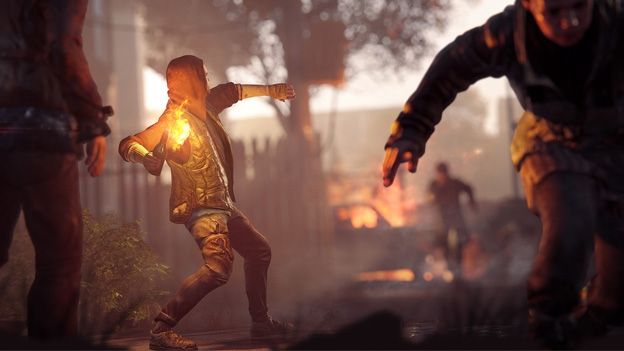 This FPS puts yourself in the boots of a freedom fighter in an occupied USA. Check out our Homefront The Revolution preview

Homefront, the dystopian First Person Shooter originally published by THQ back in 2011, didn't really have much traction on release.

While it caused something of a splash a year earlier at E3, it was greeted with lukewarm reviews due to its short campaign, undercooked multiplayer and the fact that Call Of Duty Black Ops had pretty much swallowed up the FPS military shooter audience a few months earlier. When the IP was snapped up at auction by Crytek in 2012, expectations weren't exactly high.

Homefront The Revolution, then, is something of a pleasant surprise. Rather than simply follow the rubric laid down by the first iteration, Crytek has taken the IP from a linear FPS to a sandbox and put players firmly on the backfoot.

Rather than play an invincible soldier, players take on the role of civilians turned freedom fighters in an occupied Philadelphia, using everything from homemade bombs to jerry-rigged gadgets to take the war to the enemy.

In terms of its plot, Homefront The Revolution starts a couple of years after the ending of the first game. The USA is now an occupied power, having been invaded and conquered by the North Korean-led Korean People's Army (KPA).

The invaders have rounded up local populations and forced them into ghettos, using the city centres as their local base of operations. In the ghettos of Philadelphia, however, resistance is stirring.

As preposterous as the premise sounds, it presents players with an enticing and challenging premise. Since they're outnumbered, outgunned and outclassed by the KPA, they can't simply wade into operations head on.

They're forced to plan attacks, choose tactics carefully and make sure they bring the correct equipment - which they can find at weapons caches around town - to each mission.

They also have to watch their step on the streets of Philadelphia. As we watched three players in Crytek's the hands-off demo make their way through a couple of safe-houses, we saw drones patrolling the streets, KPA RVs chugging past crowds of protesters and soldiers forcing citizens to clean resistance propaganda off walls.

As the demo progressed, we witnessed, three resistance fighters stage an attack on a KPA-held police station. As the place was teeming with military carriers and troops, a full frontal assault wasn't possible.

So, instead, we watched as one of the players placed a bomb on a radio controlled car, which they then piloted up the front and detonated. Once that happened, all hell broke loose; the surviving KPA began attacking the protesters outside, while the resistance fighters used the chaos to break cover and slip away.

It's all quite compelling stuff, and it's certainly more appealing than the crammed corridor of the first Homefront.

It'll be interesting to see how brave Crytek is prepared to be with its new game, too, since plonking players in the boots of guerrilla soldiers opens up all sorts of dark territory.

There, for example, are parallels one could draw with Homefront The Revolution and the presence of the USA in foreign territories such as Afghanistan. Whether or not the developers would be bold enough to do so, remains to be seen.