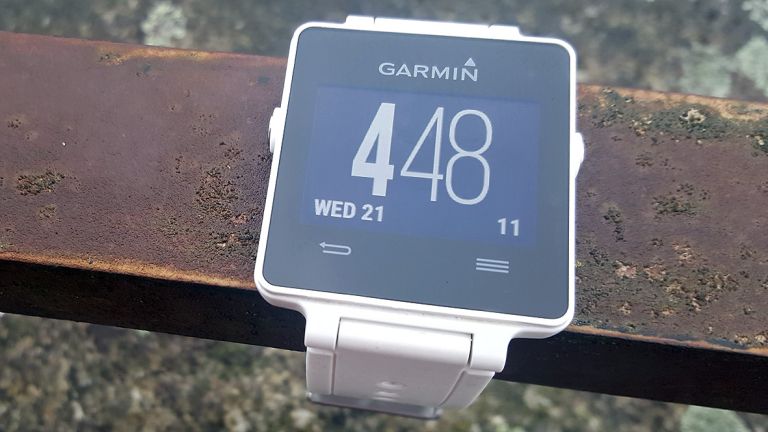 The Garmin Vivoactive is a bit of a departure for a brand that's better known for bringing us all-out run-tracking watches like theForerunner 225. Unlike its previous offerings, this timepiece isn't content with just tracking runs, rides and laps in the pool; it wants to be your daytime all-rounder, with activity monitoring, smartphone notifications and sleep tracking.

It may be a fitness tracker/smartwatch fusion, but Garmin has still gone to town with the Vivoactive's sports credentials, even building in GPS and some of its golf-tracking smarts. But by giving it a larger screen and adding things like smartphone notifications, the Vivoactive aims to be much more.So, at about £140/$200, is the Garmin Vivoactive an ideal sporty wearable for tech-heads?

While this is one of the best-looking Garmins we've seen to date, when you compare it to the Withings Activité or the Apple Watch, it isn't really the prettiest bit of wrist kit.

To be fair to Garmin it's not bad looking compared to other sports watches, but when you line it up in the smartwatch space, it comes across as rather square and angular.

Impressively, the watch is just 8mm thin, but on the whole it's not one for the dainty-wristed, with full dimensions of 43.8 x 38.5 x 8mm and weighing just under 40g.

For those with more accommodating wrists, better news is that the Vivoactive's silicone strap means it's comfortable to wear.

The LED display is gently coloured and uses ambient light, which works well in bright sunlight, but night-time visibility isn't brilliant unless you use the button-activated blue front light. It's a small niggle, but this can get a little irritating on long night runs.

The 1.38-inch screen's resolution isn't much to write home about either – at 205x148 pixels it's comparable to the first wave of Android Wear watches.

The Vivoactive has a claimed battery life of up to around three weeks, but that will plummet to less than a day if you're plugging away with its GPS tracking on. It juices up in its own magnetic cradle via any USB charger, so you'll need to lug that around with you should you need to charge it away from home.

Swimmers will appreciate the fact that the watch has a water resistance rating of 5ATM, or 50 metres.

The Vivoactive deftly tracks walking, running, cycling and swimming, with pace, steps, laps, strokes, distance, altitude and all manner of stats tallied up and synced wirelessly to the (largely excellent) Garmin Connect app on your smartphone for dissecting later.

The GPS is reliable. It was quick to get a fix, and retained its connection well in our tests.

Run tracking is accurate, with your route shown on a map, and the accelerometer adds your step count into the mix with a reasonable degree of accuracy.

On the flip-side, the Vivoactive is lacking an optical heart-rate tracker, although this isn't such a bad thing when other bands like Basis Peak require an impossibly steady hand to keep their HR trackers in the right position. Pair the Vivoactive with Garmin's HR tracking strap and you'll get better accuracy at no significant extra cost – problem solved.

The golf feature, if that's your bag, is a nice addition. The Vivoactive taps into a 30,000-course database to give you detailed insights, such as telling you where the next hole is and how far away from it you are.

Sleep tracking isn't the Vivoactive's strong point, but it does offer the basics. One advantage it has over some competitors is that it automatically recognises when you've nodded off – so that's one less button you have to press when you're bleary-eyed.

The watch will differentiate between resting time and actual sleep too, feeding information like time spent asleep and how restful you were to Garmin Connect for you to check up on in the morning, with graphs and time indicators showing your night-time activity.

However, the information you get in the Connect app isn't really that insightful. Arguably that's a criticism we could level at most sleep trackers, but Garmin hasn't done much to compete with the likes of Fitbit and Jawbone here.

Garmin Connect offers no insight into what any of your sleep stats really mean – or, more to the point, how you can get a better quality of sleep.

The Garmin Connect app is available for iOS and Android, as well as Windows and Mac PCs, and puts all of your daily activity, sports and sleep-tracking information into one place for more detailed analysis.

It deals in graphs, which, when you get used to them, are useful for checking at a glance. And there's a lot of detail and feedback on your training to get your teeth into.

It's not the prettiest of apps, and it certainly isn't on a par with the likes of Jawbone's platform in terms of slickness, but it has a lot more depth and several other impressive features; syncing, for one. The Vivoactive feeds all of your stats to Garmin Connect in seconds, fast enough to make Basis Peak's similarly speedy mobile platform nervous.

Garmin has gone some way to being a useful aggregator too, with the ability to connect to apps like MyFitnessPal to add calorie-counting to your lifestyle logging, and Strava to enable you to fire your recent runs and rides into the Strava app.

The Connect platform also has a lot of social tools to help with motivation. You can join challenges, set up groups and even let family and friends follow your runs in real time with the Live Tracker feature. All of these have to be managed via the web rather than the mobile app, though.

The Vivoactive is a great attempt at a do-it-all watch which does that tricky job of offering great insights for sports folk and useful notifications during the day. If you can forgive the looks, for anyone looking for a tracker that sits comfortably between sports and everyday it's one of the best options out there.

The detail level of the Vivoactive's feedback on workouts across a wide range of sports, plus its outstanding GPS tracker, are the real USPs, and go some way to making up for things like the lack of optical heart-rate monitor.

If you're after a basic fitness tracker you could get a lot cheaper than the Vivoactive, but you could do a lot worse too.

Admittedly, the Garmin Vivoactive is a bit of a curious hybrid. Hardcore runners would be better off with a hardcore running watch, techies might well favour a proper smartwatch, one-jog-a-week guys not really getting the most out of its actually quite impressive sports-tracking prowess, and those wanting a step and sleep counter might well think it's a bit on the bulky side compared to a Jawbone.

However, as all-rounders go, the Vivoactive is not a bad effort at all from Garmin. It certainly beats its most obvious rival, the similarly shaped and roughly comparable, features-wise, Basis Peak.