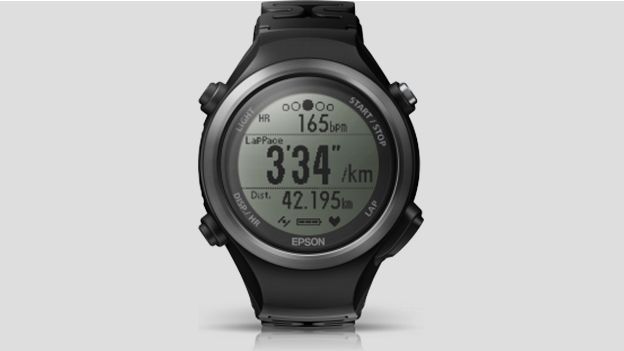 Fitness tech is big business. From power meters on bikes, cadence sensors in your hat and HR monitors in your smartphone, there's never such a range of fitness tech products available as there is today.

The Epson Runsense range is firmly aimed at wrist-mounted fitness data botherers, and comes as a fairly sudden departure for a company well known for some decades for making printers. From a simple fitness band up through varying levels of running watch, Epson has tried to tick as many boxes as possible with the range, finally culminating in this, the snappily monikered SF810B. It's got the same base software and UI as cheaper models, but with the addition of an LED HR monitor splinched into the case-back.

First up, the good news. The SF-810 is surprisingly svelte, smaller than a G-Shock, and carries barely any weight. Tech specs say it weighs 52g, and it's barely noticeable on the wrist. Unfortunately Epson have gone for a plastic body, presumably to keep the weight down, which feels a bit budget. The buttons are all positive, but plastic also, as is the screen, which will scratch relatively easily. The bezel is alloy, but that's it on the metals front. In the box you also get a phone charger-sized device which is the charging/synching shoe for the 810. Epson claim the watch is water resistant up to 5ATM (40m), which we didn't get to test, but should resist the odd rain shower in use.

Battery life is one of Epson's biggest USPs in their marketing materials, being a claimed 20 hours with all the lights (HR, GPS) on. We'd agree it's pretty close, as long as you don't spend too long on Bluetooth meddling with settings as well. That's a healthy battery life indeed, and given the flyweight nature of the Runsense, it's hard to fathom how they've managed it.

There are three types of exercise covered, running (default), walking, and cycling, which upweights the GPS readings rather than watch sensors as your arm won't be moving.

Epson have certainly got the right GPS chip in this device, which picks up satellites in super-quick time, literally within yards. The 'state-of-the-art built-in optical heart rate sensor' is a little more temperamental until the correct strap tightness is achieved. Snug is the best description – too tight will give you a 10BPM variation over a control chest strap (linked to the ever-reliable Polar M400). Of course, during testing we had this extra control strap for reference, but how a customer without a second device is supposed to work out how tight is right we're not sure. Obviously, variations of a single BPM can change the real-world impact of your training regime, so accuracy is pretty important here.

A real standout function is the Smart Stride Sensor, which delivers a real-time stride length reading, something not many trackers attempt. Once you've worked out your optimum stride length for the distance and cadence you're undertaking it's a handy – if advanced – value to monitor. However, as with HR there's no ability on the Runsense to 'lock' this to your desired values, leaving it to the runner to carry that info in their head and constantly check progress.

A big disappointment is the lack of context or coaching in the Runsense. Although the data if captures is good, you'll need to have a detailed training plan to take advantage of it. Once you've calculated your pace and ideal stride length, waypointed your training routes (adding in altitude manually in the phone app), input it into the app, synched it with the watch you're all set. Compared to Garmin and Polar this process is epic. The UI of the Runsense platform overall is also a problem – this isn't the type of product you'll have up and running without the manual.

The app/web UI is a case in point – the Android app is a web app, and not all the webpages are mobile responsive, so you'll be scrolling around to read the text. The process goes like this: Download app, create account, then use the web-app to approve your account. Then change the login details on the app, sync the watch with your phone via Bluetooth. Then select the data you'd like to upload to the app for analysis. A double beep from the watch tells you it's synching data, which takes from 30 seconds to a couple of minutes. You'll need to repeat this for each training session you'd like to upload, so keeping on top of this is key. Finally, you get some insights, but these are limited to graphs and maps very like the ones you'll be familiar with from most phone-based exercise apps.

In the Runsense app you can change the usual parameters like HR zones, personal info, set interval training goals and recovery times, as well as create target pace alerts. Finally, you can create waypoints along regular routes that will trigger an alarm and performance readout to that point once reached.

Overall, we found the data pretty comprehensive, and apart from initial positioning gremlins with the HR monitor it tallied pretty well (ie: within a few beats normally) with a chest strap. One major disadvantage is the screen size and resolution – even backlit the contrast of black on grey is hard to read at a glance, and the size of the screen means that the data packed in there is also hard to digest in a flash. Of course, this is a very compact running watch, and that benefit works both ways.

If the Runsense SF810B was half the price then these flaws would be balanced out by the sensor quality, but given an RRP of £299 they're hard to defend. That said, if Epson develop this line further it's got the potential to be great – a slightly more high-end build and better UI and this would be a brilliant product.