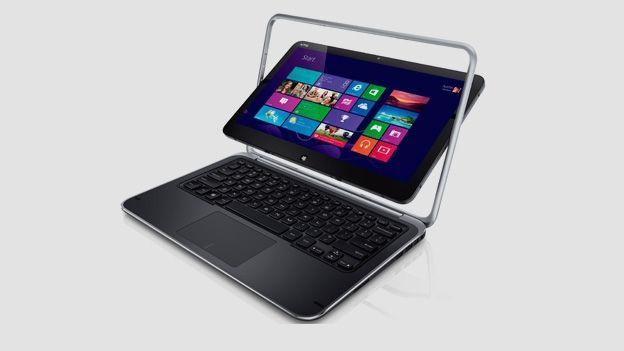 The Dell XPS 12 is a hybrid device blending the boundary between tablets and PCs. But does this Windows 8-toting device deliver?

Dell has long been intent on combining the two and the Dell XPS 12 (also known as the Dell XPS Duo 12) has a screen that flips 180 degrees to act as a hefty Windows 8 tablet with a 12-inch screen.

The biggest rival, over a traditional laptop and tablet, is the £699 Lenovo Yoga ultrabook, which features a screen that bends back through 360 degrees rather than the 'spinning within a frame' design of the Dell XPS 12.

Dell rarely puts a foot wrong with stylish yet sensible build, designed for business and serious home use. Despite the tablet credentials, the Dell XPS 12 is definitely a machine for the home - it weighs over 3lbs which is a barrier that few ultrabooks cross, even if they have larger screens than the 12-inch display here.

There's a lot inside, however, so more on that later. The weight also explains the rugged feel - against Asus and Acer rivals, there's no flimsy compromise anywhere on the body - it feels like a desktop computer compared to a laptop. The keyboard and trackpad are both soft, responsive and very quiet - as perfect a typing system as we've seen on a PC laptop.

There's a hefty spec from the start on the high-end model - an i7 processor meets 8GB of RAM and a 256 SSD drive. The £979 entry level model downgrades to an i5 process, 4GB RAM and 128 SSD so it's worth the extra cash for the SSD upgrade alone.

There's a headphone socket, Bluebooth 4.0 and two USB ports but no HDMI out however, which seems a bit 2008 for a modern laptop that is designed for serious business and home office use. There's no optical drive for DVDs or Blu-ray discs.

The 12.5-inch Gorilla Glass True Life WLED display is impressive and sharp and, crucially, touchscreen commands work well and the screen is responsive in PC and tablet mode. The screen may look fragile when flipped but it's a solid frame and is secure once wedged into tablet or PC formation.

An i7 process and 8GB of RAM means that this is a serious laptop offering MacBook Pro levels of performance especially when paired with 256GB of SSD storage.

Windows 8 may still be a confusing operating system but tasks from video editing to managing DSLR photo edits fly - it really is a machine that will replace your desktop without showing signs of stress.

The tablet mode performance is acceptable but the weight demands that it be placed on a surface, which kind of negates the free roaming joy of a tablet. It's a nice option to have but we feel the hybrid format is a marketing message rather than a consumer need at the moment.

Overall, the speed of the machine combined with the excellent keyboard mean that browsing and editing documents is easy. As a PC, it's one of our favourite desktop contenders - the power supply and bulk really means it's a pain to travel with.

A 6 cell lithium ion battery does a good job in keeping the powerhouse going for almost five hours of heavy use which isn't bad given the screen size and power of the XPS 12. It can't quite match a similarly priced MacBook Pro but it does beat many rivals by at least an hour by our reckoning.

The Dell XPS 12 is an excellent PC rather than a laptop - used as your main home system, it's portable, quiet and feels like a luxury experience thanks to a great display and highly usable keyboard and responsive touchscreen.

The tablet mode works but it's one of the heaviest tablets in the world so only suitable for sofa or desk use. Even without the tablet skill set, it's an admirable and powerful machine tied to the home.