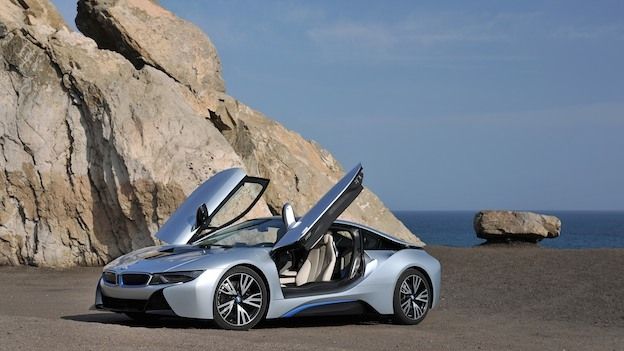 The hybrid BMW i8 not only packs the sort of futuristic styling to have heads turning, it also features a cutting-edge petrol/electric powertrain that packs the performance chops to challenge the sportiest premium rivals.

A number of automotive manufacturers have cottoned on to the fact that hybrid power - where batteries and electric motors support an internal combustion engine - is the best way propel a car at speed without slurping fuel like it's going out of fashion. But the hot new BMW i8 is the German marque's way of proving that sustainable power can be sexy. By plonking a relatively tiny 1.5-litre twin-turbocharged engine and a powerful electric motor into an incredibly pretty shell, BMW has created a halo vehicle that makes a BMW Z4 look slightly boring and gives the lauded M3 a run for its money on the racetrack.

BMW's key move was to ensure the new 'i' series, which also encompasses the city-friendly i3, looks like nothing else on the market. Hence the i8 boasts pure science fiction styling that's aimed squarely at those who aren't afraid of embracing new technology.

All BMW i8's are accounted for until 2016 and that's because this sub-£100k proposition offers value for money like little else available on forecourts. Customers get truly original styling that draws from BMW's back catalogue while simultaneously pointing decidedly to the future and a hybrid powertrain that offers true sports car performance. It's even packed with the latest version of BMW's brilliant iDrive infotainment system and two useable rear seats, meaning it's also a fairly practical everyday proposition.

Most of the i8's technology lies underneath that angular bodywork, where a highly turbocharged 1.5-litre three-cylinder engine is mated to a 96kW electric motor for grin-inducing performance. The compact engine powers the rear wheels and the electric motor drives the front, meaning the i8 kicks out a total of 357bhp when both systems are called upon. Pure electric motoring is available for around 23 miles at speeds of up to 75mph, while BMW claims a combined range of 375 miles with the possibility of achieving 135mpg on said journey. Not bad considering the i8 can accelerate from 0-62mph in just 4.4 seconds.

BMW's iDrive infotainment system has also been upgraded to include a number of hybrid-orientated applications, including an intermodal sat-nav system that takes into account battery range, locates the nearest public charging spot and suggests other transport alternatives should the route become blocked with traffic. There's also a handy smart phone app, which allows customers to remotely check battery levels and locate nearest charging stations when outside the car. BMW's host of ConnectedServices, such as online weather, traffic announcements and a parking space locator can all be called up on the neat 8.8-inch touch screen display.

Opening the scissor doors and clambering inside the low-slung BMW i8 is an experience most won't forget in a hurry but the cockpit is brilliantly laid out and instantly recognisable as a BMW product, so getting to grips with space-age machine only takes a matter of seconds. Pulling away in all-electric mode is eerily quiet but strangely satisfying, as the powerful motors do a great job of rocketing the i8 to great speeds without so much as a peep from the exhaust pipes. A simple press of the 'Sport' button soon fires up the turbocharged engine, which snarls and barks into life and produces a note that puts larger units to shame.

On the road, the ride is definitely errs the firm side but the overall suspension and steering set-up is aimed more towards the gran tourer market than all-out Porsche 911-baiting performance. Regardless, it's fast, styled like nothing else on the sale today and makes a mockery out of the competition in terms of fuel economy. Plus, well-heeled individuals can enjoy cruising through central London without paying the Congestion Charge and avoiding road tax without compromising the attention that comes part and parcel with supercar ownership.

There's no doubt that the future of motoring will involve mating the humble internal combustion engine with various alternative power source and the BMW i8 perfectly iterates how great the result can be if you do it right. It helps that the German offering looks absolutely fantastic and features enough on-board tech to dazzle dinner party guests for years to come. It may not perform like the similarly priced Audi R8 of Porsche 911 but it does make them look archaic in comparison. There's a reason why all BMW i8s are accounted for and that's because it is quite possibly one of the most interesting cars on sale today.

More about BMW i8