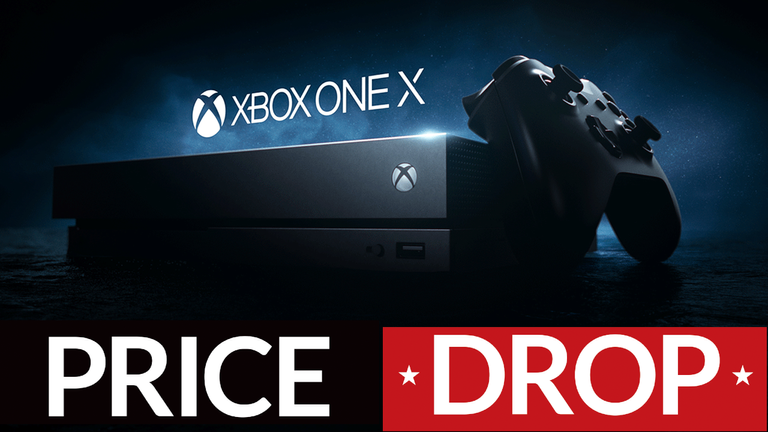 Microsoft announced its Xbox Series X last year, and the spotlight has been on Sony ever since, with the imminent reveal of its PS5 set for the next few days, or - more likely - next month now.

In a bid to get a piece of the limelight, specs for the Xbox Series X were dropped this week causing quite the buzz, and now the price on Microsoft's most pricey and powerful console has been slashed in an aggressive sale that will save you big bucks on the standalone console and bundles.

Both UK and US retailers are getting on the action, with the official Microsoft Store leading the charge with Xbox One X bundles coming in at £299, a snip of their former £449.99 price tag. Over in the US store, a similar offer sees bundles drop from $499.99 to $299, saving you $200. Some retailers are even besting Microsoft, like Currys PC World's £259 Xbox One X bundle.

You can take a gander at these unmissable US and UK deals below:

Xbox One X 1TB | Star Wars Jedi: Fallen Order Deluxe Edition download | Xbox Game Pass + Xbox Live Gold one month trial | One month of EA Access | Was: £449.99  | Now: £299 | Save: £150
Respawn's Fallen Order will have you step into the shoes of a Jedi Padawan after the execution of Order 66. If you're not familiar with Star Wars lore, it's a solid action adventure that lets you master Force abilities and swing a lightsaber around. And you can do all that on a hugely powerful console for less than £300. View Deal

Xbox One X 1TB | Forza Horizon 4 LEGO Speed Champions download | Xbox Game Pass + Xbox Live Gold one month trial | Was: £449.99  | Now: £299 | Save: £150
LEGO meets the world of Forza in this bundle, that includes a full game download of Forza Horizon 4 along with the somewhat whimsical LEGO Speed Champions DLC. There's an entire LEGO alley to race around, as well as a Master Builder’s House with a garage of brick-based cars like the McLaren Senna, Ferrari F40 Competizione and 1967 Mini Cooper S Rally.

Xbox One X 1TB | Gears of War series | Xbox Game Pass + Xbox Live Gold one month trial | Was: £449.99  | Now: £299 | Save: £150
This bundle includes the newest, current-gen title in the series, Gears of War 5, as well as Gears of War Ultimate Edtition - a remaster of the iconic first game that's been modernised for the Xbox One generation. All of the titles are digital, and they also include Gears 2, 3, and 4, so you're getting a brand new Xbox One X console and a whopping five games for your money. View Deal

Xbox One X 1TB | 3 month subscription to Xbox Game Pass + Xbox Live Gold | Deal Price: £259
This is a fantastic deal from Currys for those of you who want to dabble in the extensive library of games on the Xbox platform. The console doesn't come with any pre-installed games, but instead gives you a 3-month subscription to the Xbox Game Pass service, which is essentially Netflix for video games, letting you stream popular titles from a huge catalogue. It's a great place to start if you're new to the platform.   View Deal

Xbox One X US deals

Xbox One X 1TB | Star Wars Jedi: Fallen Order Deluxe Edition download | Xbox Game Pass + Xbox Live Gold one month trial | One month of EA Access | Was: $499.99  | Now: $299 | Save: $200
Microsoft's bundle deals aren't just restricted to UK shores. US gamers can also get in on the action with the same bundles on offer in th UK store, including this Star Wars Jedi: Fallen Order bundle with one month or Xbox Live Gold, Xbox Game Pass, and one month of EA Access.View Deal

Xbox One X 1TB | NBA 2K20 Special Edition download | Xbox Game Pass + Xbox Live Gold one month trial | Was: $499.99  | Now: $299 | Save: $200
There are two variants of this bundle on the US Microsoft Store, and given that this one is the special edition, and that all Xbox One X bundles are priced at $299, it makes more sense to opt for this one. That is, of you like the look of the Special Edition Hyperspace console. If not, there's always the standard black option.  View Deal

Xbox One X 1TB | Star Wars Jedi: Fallen Order | One month Xbox Game Pass Ultimate |  Was: $499.99  | Now: $299 | Save: $200
Walmart has a handful of $299 options for the Xbox One X, but the retailer also lets you build your own bundle. You can go for the $299 deal with a game and one month of Xbox Game Pass Ultimate, or for $10 extra, get a whole three months subscription to the service. Considering it usually costs $15 per month, this is an absolute steal on top of an already extraordinary bargain.View Deal

Even though you can also grab the standalone console for the same price, bundles usually offer the better deal, giving you either free games or access to Xbox Game Pass Ultimate - although a lot of the latter deals promotions of the service are exclusive to new sign-ups only, and not players who are already subscribing to the service.

It's certainly not a deal-breaker though - far from it. These prices are some of the lowest we've seen for the Xbox One X, and if you were ever considering treating yourself, now is most definitely the time.