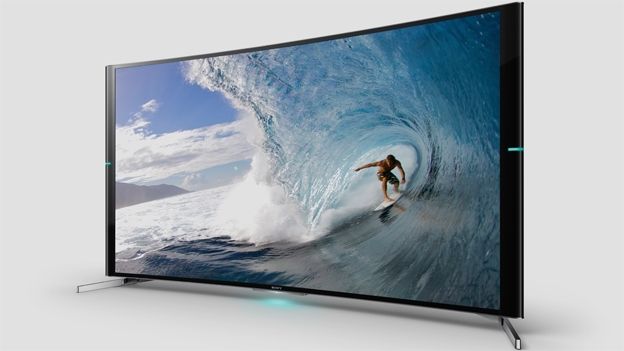 The bendy-vision TV ships in two sizes, 65-in and 75-in, both touting four times the detail of standard full HD.

The teched up tele also makes use of various image enhancements like X-tended Dynamic Range which 'intelligently boosts contrast for sparking highlights and deep blacks'.

Although the upscaling won't give you true ultra-HD, the pixel-guessing tech will boost resolution so low-spec footage doesn't look too shabby on the mega screen.

It's also fully 3D-capable, and ships with two pairs of 3D glasses.

"There are ordinary TVs. And there's Sony's fabulous new Bravia S90 that guarantees your entertainment is always in beautiful shape," gushes the firm.

Sony's not just bragging about video quality either, with the new Bravia toting some serious speakers to boot.

The S90 comes with Sony's 4.2 channel multi-angle speaker system - a fancy way of saying that the speakers are directed at 'carefully controlled' angles for optimum sound output.

The svelte screens also pack two low-frequency woofers for beastly bass, but if hip-hoppers still aren't sated then there's an option to add a wireless subwoofer for floor-rumbling tuneage.

There's no price point or release date for either TV just yet, but we're betting both these teles will be on the mark well in time for the crimbo splurging season. Pro tip: might not fit in a stocking. Under the tree's not looking good either...